Mallard was an American swamp-rock band that released a self-titled album on Virgin in 1975, followed by In a Different Climate in 1976. They were formed by three members of Captain Beefheart and His Magic Band.

For Harkleroad and Boston, this marked the end of a five-year, five-album stint as Magic Band members that began with the 1969 release Trout Mask Replica. Tripp joined on the 1970 followup Lick My Decals Off, Baby and played on the 1972 albums The Spotlight Kid and Clear Spot. He also backed Frank Zappa in the 1968–70 lineup of the Mothers of Invention.

The trio formed Mallard with vocalist Sam Galpin. They took their name from the mallard wild duck of subtropical Central America, Eurasia, and North Africa. Early support came from Jethro Tull frontman Ian Anderson, who demoed the band at La Maison Rouge, the mobile studio on his country estate. Musician John French, a Beefheart sideman through two periods (1967–72, 1976–80), briefly played with Mallard and co-wrote some of their early songs. 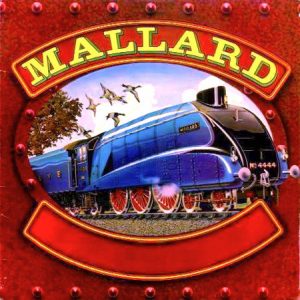 Mallard released their self-titled debut album in late 1975 on Virgin. It features eight vocal tracks, mostly composed by Harkleroad with co-writes by French (“One Day Once,” “A Piece of Me,” “Reign of Pain”), Boston (“She’s Long and She’s Lean“), and third wheel David Wagstaff (“Back on the Pavement,” “Winged Tuskadero”). Harkleroad also arranged the French composition “South of the Valley.”

The one outside number, “Desperados Waiting for a Train,” was written by country singer Guy Clark; it features Galpin on piano. Keyboardist John “Rabbit” Bundrick (Free, Crawler) plays Fender Rhodes electric piano on “One Day Once,” “A Piece of Me,” and “Reign of Pain.”

Illustrator Mick Lye of Blue Egg Studio did the cover art: a rolling blue choo choo train, as seen through a riveted port hole. He also illustrated the 1976 release Crosscut Saw by Groundhogs. 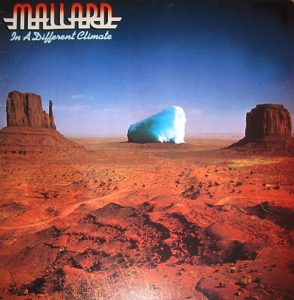 Mallard’s second album, In a Different Climate, appeared on Virgin in late 1976. Harkleroad wrote six of the eight numbers with help from Boston on “Green Coyote” and Thomas on “Heartstrings” and “Your Face On Someone Else.” Wagstaff co-wrote the latter and partnered with Thomas on “Harvest,” which features pedal steel guitar by John McFee (Clover, Doobie Brothers). Boston wrote and played dobro on “Old Man Grey,” which segues into Harkleroad’s “Texas Weather,” co-written by one Ted Alvy, who also added lyrics to “Mama Squeeze” and “Big Foot.”

“Harvest” and “Green Coyote” were paired on a 7″ in the UK, where Mallard received most of its promotion.

Harkleroad moved to Oregon, where he worked as a guitar tutor.

Boston played on a 1979 single by new wavers Ace and the Eights. He returned as Rockette Morton with the 2003 CD Love Space.

Thomas surfaced in the mid-’80s edition of Sparks and later worked with Bruce Hornsby.

Mallard and In a Different Climate were reissued as a two-on-one CD in 1994 on Virgin.

Law
Law were an American hard-rock/funk band from Youngstown, Ohio, that released a self-titled album...
Slik
Slik were a Scottish pop-rock foursome that released a string of singles on Bell Records during th...
Isaiah
Isaiah were an Austrian jazz-rock/psych sextet from Innsbruck, Tirol, formed in 1971. The band rel...
Quantum Jump
Quantum Jump were an English jazz-funk/rock quartet that released two albums on the Electric Record ...
The Sons of Champlin
The Sons of Champlin were an American brass-rock/soul band from San Francisco, formed in 1965 by n...