Mainhorse was a symphonic-psych band formed in 1969 by London-based Swiss musicians. They released a self-titled album on Polydor in 1971 and a film-theme single on Évasion in 1972. Keyboardist Patrick Moraz did brief stints in Refugee and Yes, then launched a prolific solo career.

Mainhorse formed in London as Integral Aim in the summer of 1969 when keyboardist Patrick Moraz and bassist Jean Ristori, both Swiss nationals, teamed with local 17-year-old drummer Bryson Graham.

Moraz (b. 1948, Morges) was an ambidextrous pianist from an early age who, at 16, became the youngest winner in the soloist category at the Zurich jazz festival. He settled in London at 21 after beating obstacles from the UK musician’s union.

Integral Aim auditioned multiple singers and keyed in on two prospects: John Hodkinson and David Kubinec. Each was given the challenge to write lyrics for Ristori’s “Pale Sky” in under 10 minutes. Kubinec, a Yugoslavian expat who recently played organ in World of Oz, completed the task in four minutes. (Hodkinson, who cut two 1967/68 Decca singles as Jon Gunn, surfaced in jazz-rockers If.)

The new band flew to Switzerland and expanded to a sextet with two local musicians: drummer Arnold Ott and French guitarist Auguste De Antoni, both veterans of the Patrick Moraz Quartet, which played the 1965 Zurich jazz festival and toured the states with John Coltrane. Kubinec suggested a new name, Mainhorse Airline. The two-drummer lineup lasted only three months before Ott dropped out to marry.

As a five-piece, Mainhorse Airline secured backing from Dutch millionaire Sam Miesegaes, who also financed the launch of Supertramp. In Geneva, they recorded 10 songs between the Autumn of 1969 and the summer of 1970. The contents, first issued in 2007 as The Geneva Tapes, include an almost seven-minute version of “Pale Sky” plus two Kubinec numbers (“The Daybreak of Eternity,” “A Very Small Child“) and seven Moraz compositions, including “Blunt Needles,” “The Passing Years,” “Make It the Way You Are,” “Directions for Use,” and the 11-minute “God Can Fix Anything.”

In mid-1970, Kubinec suffered a heart attack and left the band to recuperate. De Antoni also departed Mainhorse Airline, which returned to England and shortened their name to Mainhorse. In London, they hired guitarist Peter Lockett, a friend of Graham’s who also sang and played violin. The now half-Swiss/half-English quartet secured a deal with Polydor. 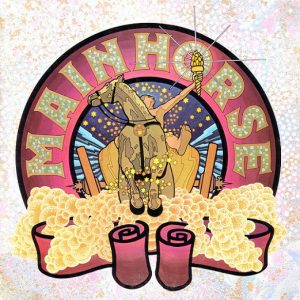 Mainhorse released their singular album proper in 1971 on Polydor (UK, Germany, France, Australia). Side one contains two fresh Moraz originals, “Introduction” and “Such a Beautiful Day,” plus re-recordings of “Passing Years” and an elongated “Pale Sky.” Moraz composed the three numbers on side two: “Basia,” “More Tea Vicar,” and the 10-minute “God.” Lockett wrote all the lyrics apart from the two Mainhorse Airline redoes (Kubinec) and “Introduction” (Graham).

The Mainhorse cover illustration — an upshot of a cone-trophy-carrying Olympian on horseback under the arched, glistening nameplate — is credited to Grahame Berney and Keith Davis of the design firm Davis/Berney/Wade, which also did 1971 cover visuals for Aubrey Small, Gypsy, Julie Driscoll, Shelagh McDonald, Steeleye Span, Stray, and Stud.

In Venezuela, Polydor issued a 7″ of “More Tea Vicar” (b/w “Basia”). In Chile, the sides were reversed (“More Tea Vicar” translated as ¿Otra Tacita de Té?) on the label’s local distribution arm Discos Philips, which issued Mainhorse there in 1973.

Moraz composed two songs for The Salamander, a 1971 Swiss dramedy starring Bulle Ogier and Jean-Luc Bideau. In 1972, the French branch of Evasion Disques issued both tracks as a Mainhorse single, “La Salamandre” (b/w “Juke-Box”), housed in a sleeve with screencaps from the film.

During 1972, Moraz and Ristori toured the Far East with a Brazilian ballet for which Patrick served as director.

The following year, Moraz composed two soundtracks and formed the symphonic-rock trio Refugee with the one-time rhythm section of The Nice: bassist/singer Lee Jackson (Jackson Heights) and drummer Brian Davison (Every Which Way). Essentially, this was The Nice reformed with Moraz in lieu of keyboardist Keith Emerson, who disbanded the earlier formation in 1970 to co-found Emerson Lake & Palmer. Refugee released one self-titled album in 1974 on Charisma. Ristori co-engineered the album and co-wrote “The Lost Cause,” the fourth movement of the Credo suite that consumes most of side two.

Before Refugee could record a followup, Moraz got drafted into Yes as Rick Wakeman‘s replacement. He played on their late-1974 release Relayer and the ensuing tour. When Yes paused in mid-1975 to allow each member time to record a solo album, Moraz made his solo debut with the 1976 Atlantic release The Story of i, which Ristori engineered and appeared on as bassist and cellist. Yes regrouped in late 1976 but Moraz left shortly after rehearsals commenced to resume solo work full time. His next two solo albums, Out in the Sun and Patrick Moraz, appeared in 1977/78 on Charisma with production and bass work by Ristori.

Kubinec surfaced in hard-rockers The Rats, which made the 1974 album Rats First on Goodbear Records and recorded a long-vaulted followup. First includes “Very Small Child,” a remake of the Mainhorse Airline number. That same year, his solo album Day of the Madman appeared under the name Kubie on the German Kuckuck label. In 1978, he released Some Things Never Change on A&M, recorded with keyboardist/producer John Cale and guitarist Ollie Halsall (Patto, Boxer). Kubinec then moved to Yuglosalvia and cut two albums with Croatian rockers Stijene.

De Antoni did a six-month stint in Magma (1976–77) and played guitar on two songs (“Rez,” “Magellan”) on the eponymous 1977 Warner release by the space-rock supergroup Alpha Ralpha. In 1980, he cut a jazz-rock EP with one André Tartaglione and formed the post-punk band Villa Borghese with ex-Spheroe keyboardist Gérard Maimone. They released one single on RCA and made an album’s worth of material, released four decades later by archivists Simplex Records.

Graham played on the 1972 self-titled album by American singer/songwriter Tim Hardin. That same year, he joined Gary Wright‘s Wonderwheel for the soundtrack to Willy Bogner’s German ski comedy Benjamin. Graham followed Wright into the reformed Spooky Tooth for the 1973/74 albums You Broke My Heart So…I Busted Your Jaw and Mirror. In 1975, he split honors with ex-King Crimson drummer Ian Wallace on Pump Iron!, the debut solo album by Ten Years After guitarist/frontman Alvin Lee. After a brief involvement in the punk scene circa 1978 (Front, Neo), Graham partook in early ’80s projects with Traffic alumni Jim Capaldi and Rosko Gee (Zahara, Zen Attack).