Love Sculpture was a Welsh blues-rock powertrio, best known for the songs “In the Land of the Few” and the 1968 instrumental “Sabre Dance.” They released two albums on Parlophone: Blues Helping and Forms and Feelings. Guitarist David Edmunds launched a solo career and later teamed with Nick Lowe in Rockpile.

Love Sculpture had its roots in The Human Beans, a psych-rock trio that released one single in 1967. The core of the band — guitarist/singer Dave Edmunds, bassist John David Williams, and drummer Bob “Congo” Jones — first teamed years earlier in The Raiders, a rockabilly trio that played the Cardiff circuit.

Edmunds (b. 1944) first performed at age 10 in a piano duo with his older brother, Geoff. During his mid-teens, Dave shifted through numerous bands (The Stompers, The Heartbeats, The 99ers, Crick Feather’s Hill-Bill’s) and finally formed his own group, The Raiders, in 1961. Members came and went before the lineup stabilized with David and Jones.

Before The Raiders could land a deal, Edmunds joined The Image, a Welsh beat group that issued three 1965–66 Parlophone singles (“Come to the Party,” “I Can’t Stop Myself,” “I Hear Your Voice Again”), followed by two on the German label Hit-Ton Schallplatten, including a cover of “Red Rubber Ball,” the Paul Simon co-write made famous by American popsters The Cyrkle.

After leaving The Image, Edmunds formed The Human Beans with Williams, Jones, and second guitarist Mickey Gee. Their one single, “Morning Dew (Take Me for a Walk)” (b/w “It’s a Wonder”), appeared on Columbia in 1967. The a-side, written by North American folksters Bonnie Dobson and Tim Rose, was later covered by Nazareth. The b-side, composed by Stax writers Isaac Hayes and David Porter, was recorded the prior year by US soul duo Sam & Dave.

In early 1968, Edmunds, David, and Jones reconfigured as a powertrio under a new name, Love Sculpture. Their first single, “River to Another Day” (b/w “Brand New Woman”), appeared that February on Parlophone. The a-side was co-written by brothers Charles and Kingsley Ward, the team behind Rockfield Studios. Edmunds wrote the b-side himself under the pseudonym Crick Feather. It was recorded months later by New Zealand popsters The Simple Image on their 1968 Regal release Spinning, Spinning, Spinning. 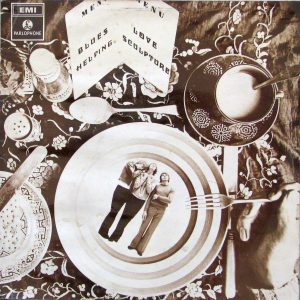 In September 1968, Love Sculpture released their second single, a cover of the Willie Dixon standard “Wang-Dang-Doodle,” backed with their take on the 1961 Freddie King instrumental “The Stumble.” Both songs appear on their debut album Blues Helping, released the following month with eight additional covers, including songs by Ray Charles (“I Believe to My Soul,” “Come Back Baby”), B.B. King (“3 O’ Clock Blues”), and Elmore James (“So Unkind”). The title track, which closes the album, is the only group-written number.

Blues Helping was recorded at Abbey Road Studios and co-produced by Kingsley Ward, who co-founded Rockfield Studios in Monmouth, Wales, with his brother Charles; and Malcolm Jones, who soon co-founded Harvest, a progressive subsidiary of EMI.

One month after Blues Helping, Love Sculpture issued a non-album single: “Sabre Dance,” a revved-up reworking of the movement in the final act of Aram Khachaturian’s 1942 ballet Gayane. The flipside, “Think of Love,” is an Edmunds original. “Sabre Dance” reached #5 on the UK singles chart. Their interpretation of the piece, inspired by the classical adaptations by Keith Emerson in The Nice, prompted the Dutch classical-rock band Ekseption to cover “Sabre Dance” on their 1969 debut album.

Love Sculpture’s version of “On the Road Again” — the 1953 Floyd Jones staple recently made famous by American blues-rockers Canned Heat — appears on the 1969 Italian Columbia comp International Groups with cuts by The Hollies, Deep Purple, Wallace Collection, and Wind in the Willows. “Stumble” and “3 O’ Clock Blues” appear on the Japanese Odeon comp Heavy – This Is the British Scene with tracks by Manfred Mann, The Pretty Things, the Yardbirds, and the Jeff Beck Group. 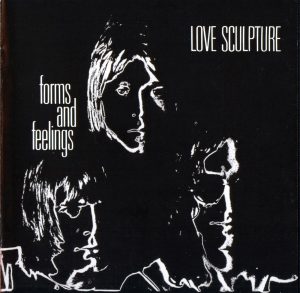 In September 1969, Love Sculpture returned with “Seagull,” a cover of the ecological ballad written and first released that year by Paul Korda. It was backed by an arrangement of “Farandole” by 19th century French Romantic composer Georges Bizet.

Both songs appear on Forms and Feelings, released in October 1969 on Parlophone. The team of Mike Finesilver and Peter Ker (Crazy World of Arthur Brown, Elli) co-wrote three of the songs: “Nobody’s Talking,” “Why (How-Now),” and “People People.” They co-produced the album with Edmunds. Collectively, they wrote the opening anthem “In The Land of the Few,” which became Love Sculpture’s fifth single in February 1970. The album climaxes with an 11-minute re-recording of “Sabre Dance.”

“Seagull” appears on the 1970 German SR International comp Tops of the Groups with cuts by the Beach Boys, Steppenwolf, and Humble Pie.

For their 1970 tour, Love Sculpture brought erstwhile Human Beans guitarist Mickey Gee aboard as a fourth member. Jones cleared out for drummer Terry Williams, a Swansea native (no relation to John David).

That May, they played Joint Meeting 1970, a three-day festival at the Eisstadion arena in Düsseldorf, Germany, with appearances by Amon Düül II, Steamhammer, the Edgar Broughton Band, Free, Taste, Colosseum, and Family. Love Sculpture played on the first day (May 16) along with Rare Bird and Heavy Jelly (with Jackie Lomax). Months later, Love Sculpture disbanded after a US tour.

Edmunds scored a transatlantic chart-topper in late 1970 with a cover of “I Hear You Knocking,” originally released in 1955 by the R&B duo Dave Bartholomew & Pearl King. The song’s retro-’50s rock arrangement indicated Edmunds’ direction as a solo artist, as exhibited on his 1971 Regal Zonophone release Rockpile, recorded with David and Williams, plus fellow Welshman Andy Fairweather-Low and Cochise steel guitarist B.J. Cole.

Rockpile was also the name of a band he later formed with bassist/singer Nick Lowe, who Edmunds befriended while producing Lowe’s prior band, Brinsley Schwarz. They toured as a group during the late ’70s while releasing solo albums. Their one joint effort, Seconds of Pleasure, appeared in 1980. Edmunds charted in 1983 with the synthpop single “Slipping Away,” produced by Jeff Lynne of Electric Light Orchestra.

Gee also went the retro ’50s route with stints in Shakin’ Stevens and the Sunsets, Memphis Bend, and Geraint Watkins & the Dominators. He played on Steven’s ’80s albums and joined Bill Wyman’s retro Ted act, Willie and the Poor Boys.

Williams joined Welsh rockers Man for their 1971 self-titled third album and remained through their 1976 release Welsh Connection. During the late ’70s, he played on solo albums by Edmunds and Lowe and joined them in Rockpile. After further credits with The Motors and The Force, he join the mid-’80s lineup of Dire Straits.

Alan Tarney
Alan Tarney (born Nov. 19, 1945) is an English-born musician and songwriter who first emerged in t...
Machine
The Swinging Soul Machine was a Dutch brass-rock-soul band that released the album Through The Eye...
Deep Feeling
Deep Feeling was an English studio band that released multiple singles of orchestral pop on Page O...
Richard Clapton
Richard Clapton (born May 18, 1949) is an Australian singer-songwriter from Sydney who released ei...
Lou Rawls
Lou Rawls (Dec. 1, 1933 — Jan. 6, 2006) was an American soul singer from Chicago who began in gosp...