Locomotive was an English brass-rock/psych band that was active with multiple lineups between 1966 and 1970. Based in Birmingham, they initially drew from Jamaican ska/bluebeat on three non-album singles.

In 1969, they recorded the album We Are Everything You See, released after the departure of keyboardist and bandleader Norman Haines. Bassist Mick Hincks and drummer Bob Lamb regrouped as The Dog That Bit People.

Locomotive evolved from the Kansas City Seven, a Birmingham jazz septet formed in 1965 by trumpeter Jim Simpson. The initial lineup included saxophonist Chris Wood (later Traffic) and drummer Mike Kellie (later Art/Spooky Tooth). In 1966, the band renamed itself The Locomotive with an emphasis on soul and R&B. The lineup at this stage featured bassist Joe Ellis, drummer “Mooney” Mazzone, and saxophonists Bill Madge and John Barry.

In 1967, The Locomotive welcomed singer and keyboardist Norman Haines, whose experience as a record clerk in Smethwick exposed him to ska music, popular among the area’s West Indies population. He penned their first a-side, “Broken Heart,” issued on the CBS soul-psych subsidiary Direction (Elmer Gantry’s Velvet Opera, The Chamber Brothers). Its flipside, a cover of the Dandy Livingston rocksteady hit “Rudy a Message to You,” was later popularized by The Specials. 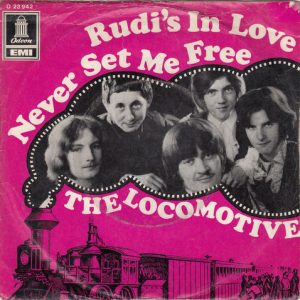 In 1968, Simpson stepped aside to act as their manager while Ellis and Mazzone cleared out for bassist Mick Hincks and drummer Bob Lamb. The band signed to Parlophone as Locomotive and issued a second ska single, the Haines original “Rudi’s In Love” (b/w “Never Set Me Free”), which hit #25 on the UK Singles Chart. When the label balked at their proposed third single, “Rudi the Red Nosed Reindeer” (b/w “White Christmas”), Simpson released it on his newly formed Big Bear Records. For contractual reasons, Locomotive disguised itself on this release as Steam Shovel.

We Are Everything You See

Locomotive, augmented by trumpeter Mick Taylor, entered Abbey Road Studios and recorded an album during the winter of 1968–69. The first release from these sessions, “Mr. Armageddon” (b/w “There’s Got to Be a Way”), appeared in January 1969. Parlophone withheld the album in favor of a followup single, “I’m Never Gonna Let You Go” (b/w “You Must Be Joking”), released that August. The a-side was written by American songwriter George Fischoff (Kiki Dee, Cherry People). Soon after, Haines left Locomotive to front his own band (after turning down an offer to join Simpson’s other client, Black Sabbath). 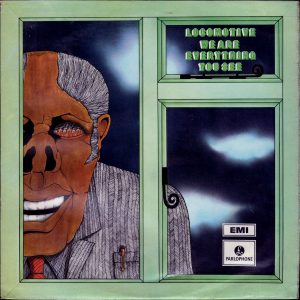 The album, We Are Everything You See, finally appeared in February 1970 on Parlophone. Side one contains “Mr. Armageddon” and “You Must Be Joking,” plus two further Haines originals (“Lay Me Down Gently,” “Nobody Asked You to Come”) and contributions by Taylor (“Now Is the End – The End Is When”) and Tea and Symphony multi-instrumentalist Nigel Phillips (“Overture”).

Side two contains four proper songs: three originals — “A Day in Shining Armour” (Haines/Phillips), “Rain” (Hincks), and “Times of Light and Darkness” (Haines) — and a cover medley of two songs by avant-psychsters The United States of America (“Coming Down/Love Song for the Dead Che”). The four songs are interspersed with “The Loves of Augustus Abbey,” an interlude in three parts.

We Are Everything You See was co-produced by Gus Dudgeon (Audience, Elton John, Magna Carta, Spring) with engineers Tony Hall (Tubby Hayes, Shape of the Rain, Mandy More, The Real Thing) and Jeff Jarratt (Masters Apprentices, Paul Brett). The cover illustration, credited to Rainbow Studios, depicts a suited man/primate hybrid peeking through a green-framed window with a crowd of people in his visible eye. Musical guests include trumpeter Henry Lowther and tenor saxophonists Chris Mercer, Dick Heckstall-Smith (then of Colosseum), and Lyn Dobson.

Concurrent to the album’s sessions, Hincks and Lamb played on another Dudgeon production, An Asylum for the Musically Insane by Phillip’s band (and fellow Brummies) Tea and Symphony.

Hincks and Lamb recruited singing guitarists John Caswell and Keith Millar, also a keyboardist and songwriter. In March 1970, the new four-piece Locomotive issued one post-album single, “Roll Over Mary” (b/w “Movin’ Down the Line”), both Millar originals. They subsequently picked a new name, The Dog That Bit People, and released a self-titled album in 1971 on Parlophone.

Hincks played on the 1972–74 albums Bleach and Rogues and Thieves by Brummie singer/songwriter Raymond Froggatt. Lamb joined a late-stage Idle Race and later surfaced in the Steve Gibbons Band (with Caswell) and its synthpop offshoot The System. He produced Caswell’s 1982 solo album Vineyards In Japan and helmed numerous recordings by UB40, Weapon of Peace, Stephen Duffy, and Lilac Time.

After leaving Locomotive, Haines formed the Norman Haines Band and issued the 1971 album Den of Iniquity. He subsequently left the music industry.

We Are Everything You See got its first reissue in 1987 on the short-lived vinyl-repress label Zap! (Forest, Tudor Lodge, The Raspberries) with the two missing 1969 sides (“There’s Got to Be a Way,” “I’m Never Gonna Let You Go”) added as bonus tracks. In 1995, Brummie archivists Shoestring Records combined the album and all their singles sides onto one CD (24 tracks in all). Subsequent CD issues on Eclectic Discs (2003) and Esoteric Recordings (2010) omit the early ska tracks but add the non-album ’69/’70 sides.