Killing Floor was an English hard-rock band that released a self-titled album on Spark in 1969, followed by Out of Uranus on Penny Farthing in 1970.

Killing Floor was formed in 1968 by singer/harpist Bill Thorndycraft and guitarist Mick Clarke, both formerly of unrecorded London blues-rockers The Loop. They placed an ad in Melody Maker that netted pianist Lou Martin, bassist Stuart McDonald, and drummer Bazz Smith. Their band name comes from the song “Killing Floor,” a 1965 single by American bluesman Howlin’ Wolf. After their first gig, ex-Radio London DJ John Edward got them signed to Spark Records. 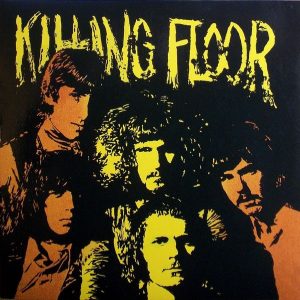 The band’s first album, Killing Floor, appeared in June 1969. It features six songs per-side, mostly co-composed by Clarke, McDonald, and Thorndycraft, including the tracks “Forget It,” “Try to Understand,” and “Nobody By My Side.” Martin contributed “Sunday Morning” and “Lou’s Blues.” Side one opens with a cover of Willie Dixon’s “Woman You Need Love.” The tracks “Wow Wow Wow (My Mind Can Ride Easy)” — listed by its parenthetical title on the album — and “Come Home Baby” were paired on a German 7″ with a sleeve bedecked in a raspberry speech balloon.

Killing Floor shows a passionate adherence to the band’s musical roots. “Woman You Need Love” is a high-octane boogie with honky-tonk piano, booming snare/cymbal drumming, fuzzy guitar licks, lightning leads and a slowed, rollicking mid-section. Wailing harmonica forwards the closed hit-hat downbeat on “Nobody By My Side,” a gruff blues-rocker grounded on a thick, distorted chordal bed. Midway, the song breaks into polka tempo for a harp solo. “Try to Understand” is a sprinting 12-bar blues (in A) flanked with dizzying piano and rapidfire drumrolls. “Forget It,” another 1-4-5 progression (in G), is a windmill of ivory runs and harmonica.

To promote the album, Killing Floor played high-profile gigs at London’s Marquee Club supporting Yes and The Nice. At the California Ballroom in Dunstable, they supported Chicken Shack, Jethro Tull, Ten Years After, and a late-period lineup of The Herd. They also played the opening slots on UK tours by American bluesmen Freddie King and Arthur “Big Boy” Crudup. On March 30, 1970, they played the Easter Festival at the Ernst Mercke Halle in Hamburg alongside Black Sabbath, Steamhammer, Groundhogs, and The Greatest Show on Earth. 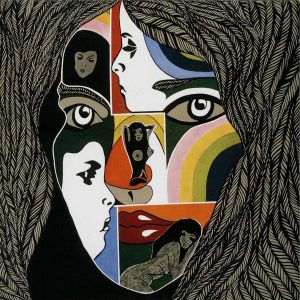 Killing Floor released their second album, Out of Uranus, in 1970 on Penny Farthing. The album features 10 originals, mostly by Clarke, McDonald, and Thorndycraft (jointly credited as “Freda Floor”), including “Fido Castrol,” “Soon There Will Be Everything,” “Sun Keeps Shining,” and “Acid Bean.” Smith co-wrote “Son of Wet” and “Where Nobody Ever Goes.” Paul Spencer Mac (aka Paul MacCallum) adds violin and effects.

The album displays sharpened counterpoint and instrumental focus. “Out of Uranus” explodes with searing, colliding guitars, stop/start bass interludes and a boiling percussive mid-section. “Fido Castro” starts on a clamped, syncopated rhythmic figure that cuts to a torrent of fret runs and tom rolls.

“Soon There Will Be Everything” is ushered by staccato guitar counterpoint over tapping cymbals, giving way to an ominous verse, a swelling Mellotron bridge and a jumping mid-section. “Sun Keeps Shining” is a trebly gallop where Smith speeds around Clarke’s pointed licks. “Acid Bean” sports a pronged, octave-darting guitar figure, paced with fluid basswork and eager drumming. “Son of Wet” has poking, jabbing fretwork that clears for a booming, marathon drum showcase.

Original vinyl copies of Out of Uranus sport a gatefold sleeve designed by Rick Breach, who did contemporary artwork for Black Widow, Catapilla, Warm Dust, Ben, Nirvana, and Gentle Giant (the UK version of Three Friends). The cover depicts leaves, rainbows, and hippy subjects (multi-persective) within the framework of a closeup female face.

Out of Uranus spawned two singles, “Call for the Politicians” (b/w “Acid Bean”) and “Milkman” (b/w “Where Nobody Ever Goes”), both housed in sleeves with variations of the album art. In 1972, Turkish label Yankı Plak pressed a 7″ of “Out of Uranus” (b/w “Sun Keeps Shining”).

In 1972, McDonald played in the short-lived Peace with (ex-Quatermass) drummer Mick Underwood and singer Paul Rodgers, then on furlough from Free. Martin joined the 1973–76 lineup of Rory Gallagher‘s backing band (with de’Ath). Clarke reappeared in pub-rockers SALT (with McDonald), which issued a 1978 maxi-single on RAW. He later fronted the Mike Clarke Band (with Martin). Smith resurfaced in post-punks Family Fodder, playing on their 1981/82 releases for indie labels Fresh and Jungle Records.

The original Killing Floor regrouped in 2002 for a string of European concert dates. They’ve since released the albums Zero Tolerance (2004) and Rock ‘n’ Roll Gone Mad (2012), the latter coinciding with their appearance at the Sweden Rock Festival with Motörhead and Blue Öyster Cult. Martin died in Bournemouth, Dorset, on August 17, 2012, aged 63.

Banten
Banten were a Dutch avant-jazz/rock band that released a self-titled album on BASF in 1972. Memb...
David Sylvian
David Sylvian — aka David Batt (born Feb. 23, 1958) — is an English musician, singer, and composer...
Samson
Samson was an English brass-psych band from Manchester that released the album Are You Samson on sma...
Allan Holdsworth
Allan Holdsworth (Aug. 6, 1946 — April 16, 2017) was an English guitarist from Bradford, West York...
Nazz
The Nazz was an American psych-rock band from Philadelphia that released the 1968–69 albums Nazz ...