Khan was an English space-rock band that released the album Space Shanty on Deram in 1972. This was the second recorded band with guitarist Steve Hillage and keyboardist Dave Stewart, who interacted earlier in Arzachel.

Stewart played in Khan between stints in Egg. He then unleashed a sequence of jazz-rock projects (Hatfield and the North, National Health, The Ghoulies) and played in Bruford. Hillage joined Gong for three albums and launched a prolific solo career.

Hillage (b. 1951) first played in Uriel, a blues-rock band he co-founded in 1968 with musicians at the City of London School, including keyboardist Dave Stewart. Before they could reach a studio, Hillage left to attend the University of Kent in Canterbury. Stewart and the rhythm section became Egg, an organ trio that signed with Deram in early 1969.

Weeks later, they got summoned by a different label to make a psychedelic rock album. Hillage returned for the sessions that yielded the 1969 release Arzachel. The trio then cut two albums as Egg while Hillage resumed his studies.

In Canterbury, Hillage befriended the local acts Caravan and Spirogyra. He soon amassed a batch of songs and started jamming as Khan with Greenwood and ex-Delivery drummer Pip Pyle.

Greenwood, a product of the R&B/beat boom, hailed from the Crazy World of Arthur Brown. Under the name Sean Nicholas, he played on parts of their 1968 eponymous album (but not the hit “Fire,” which uses bass pedals played by organist Vincent Crane). After their intended second album got vaulted by their label, Crazy World broke up in the summer of 1969 when Crane and drummer Carl Palmer formed Atomic Rooster and Arthur Brown formed Kingdom Come.

In 1970, Greenwood cut an album in California with keyboardist Dick Henningham and drummer Eric Peachey, a longtime associate. Peachey played with Greenwood in a sequence of mid-’60s mod-soul bands. Recently, he drummed for Dr. K’s Blues Band, which issued a self-titled album in 1969 on Spark.

When Pyle departed Khan after their initial rehearsals, Greenwood roped in Peachey and Henningham. (Pyle joined Gong for eight months and played on Banana Moon, the 1971 solo album by Gong frontman Daevid Allen.) Caravan’s management secured Khan a deal with Gruggy Woof Productions for an album on Decca’s Deram division. Just as recordings commenced in November 1971, Henningham quit. Hillage summoned Stewart, who was now between gigs due to Deram’s refusal to handle a third Egg album. 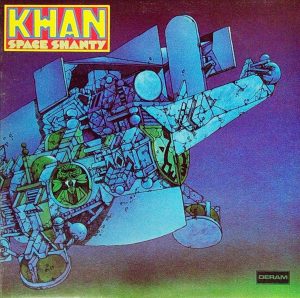 Khan released Space Shanty in May 1972 on Deram (UK, NZ), Brain (Germany), Pink Elephant (Netherlands), and Kingdom Records (France). The album contains three songs per side, mostly in the 6–9-minute range, all composed by Hillage apart from the Greenwood co-write “Mixed Up Man of the Mountains,” a soulful, mid-tempo hard rock number in B major with staccato guitar, swirling organ, and belted vocals. The song parts for a fluid, jazzy sequence of legato scales, arpeggios and tradeoffs, then resumes with a harmonized descent and rockier set of licks.

Space Shanty was produced by Neil Slaven, an Egg champion who compelled Deram to release their second album, The Polite Force, which he also produced. His other credits include albums by Chicken Shack (Imagination Lady), Henry Lowther, Miller Anderson, Pink Fairies, Savoy Brown, Trapeze, and the collective works of the Keef Hartley Band.

By the time Space Shanty hit shelves, Stewart had cleared for Canadian keyboardist Val Stevens, formerly of soul-rockers Grant Smith & The Power, which issued the 1968 covers album Keep On Running and scored a hit with the title track, originally by the Spencer Davis Group.

Khan did a brief European tour, including a May 11, 1972, show at the Châpiteau in Moustier-sur-Sambre, Belgium, with Patto and the Lagger Blues Machine. After a June leg of shows supporting Caravan, Stevens and Greenwood quit. That year, the album Greenwood recorded in 1970 finally appeared as Cold Cuts on Kingdom Records.

Hillage called back Stewart to kick-start Khan. The new lineup featured bassist Nigel Griggs, once of The Cortinas, which issued the 1968 pop-psych classic “Phoebe’s Flower Shop.” That band morphed into Octopus (one of multiple bands bearing that name) and released the album Restless Night in 1971 on Penny Farthing.

Khan embarked on a new round of live dates and debuted new material, including the Hillage/Stewart composition “I Love It’s Holy Mystery.” However, Deram vetoed any further releases by the band, which ran aground in October 1972.

Steve Hillage joined Decadence, the live backing band of ex-Soft Machine frontman Kevin Ayers. He played on the singer’s 1973 album Bananamour. During double-bills in France with Gong, Hillage befriended Allen, who introduced the guitarist to Miquette Giraudy. Hillage joined Gong for their Radio Gnome Invisible trilogy, comprised of the 1973/74 albums Flying Teapot, Angel’s Egg, and You. He and Miquette became life partners.

In 1975, Hillage went solo with the Virgin release Fish Rising, which features Miquette and Stewart. The late-period Khan numbers were recycled into the 17-minute “Solar Musick Suite,” which consumes the bulk of side one. Hillage released eight further albums on Virgin through 1982 and produced albums by Nash the Slash, Positive Noise, Real Life, and Simple Minds.

Dave Stewart teamed with Pyle — who left Khan before Stewart joined and left Gong before Hillage joined — and another Delivery alumni, guitarist Phil Miller, in Hatfield and the North, which released two albums on Virgin in 1974/75. Between those albums, he reunited Egg for the 1974 release The Civil Surface, which features Hillage on one track.

During the late ’70s, Stewart cut two albums with National Health and three with Bruford. In 1981, he formed a synthpop duo with ex-Spirogyra and Hatfield singer Barbara Gaskin.

Nigel Griggs reateamed with his mate from Octopus, drummer Malcolm Green, in Split Enz, a New Zealand art rock band that moved to England in 1976 and lost their Kiwi rhythm section. Griggs stayed with the band for the duration of their run, starting with their 1977 third album Dizrythmia.