Kestrel was an English symphonic-rock band that released a self-titled album on Cube Records in 1975. Guitarist Dave Black promptly joined a resurrected Spiders from Mars for an eponymous album in 1976.

Kestrel came together in Newcastle upon Tyne when guitarist Dave Black and drummer David Whitaker teamed with singer Tom Knowles and bassist Fenwick Moir. Whitaker played in an earlier Tyneside act, Ginhouse, which issued a self-titled album on B & C in 1971. Their fifth member, keyboardist John Cook, was fresh off a one-album stint with soul-rockers Slack Alice. Earlier, he played on the 1971 Penny Farthing release Restless Night by Octopus. 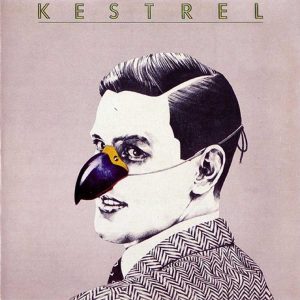 Kestrel released their eponymous album in 1975 on Cube (UK only). The album contains seven songs composed by Black, including “Last Request,” “Wind Cloud,” “Take It Away,” and “I Believe in You.” Cook wrote the penultimate track, “End of the Affair.” Each cut is within the four-minute range apart from the album opener, “The Acrobat,” and the two seven-minute songs that bookend side two, “In the War” and “August Carole.” The album is noted for its thick presence of Mellotron, which Cook plays along with organ and synthesizer.

Kestrel was produced at Essex Studios by John Worth, who worked on acclaimed Cube titles by Andrews (Writer of Songs) and Helms. The album’s engineer, John Rollo, worked on the 1972 Threshold release In the Realm of Asgærd by folk-psychters Asgærd. More recently, he engineered the calypso-funk album I See the Light by Batti Mamzelle, a group of Trinidadian musicians with one-time Dada co-singer Jimmy Chambers.

Kestrel came in a single sleeve that shows a man from a 1950s stock photo doctored with a beak mask (not of a kestrel). The back features a b&w illustration of a modernist coffee table where the beak has been placed. The sleeve design is credited to Arty Types, who also did the visuals on the Strawbs 1975 album Ghosts.

Cook played on one track (“Slip Away”) on Elastique, the 1975 debut album by Stretch. Between 1976 and 1979, he played on albums by Danny Kirwan, Kit Hain (ex-Marshall Hain), and a solo album by Stretch guitarist Kirby. In 1981, he surfaced in the soul-rock one-off Midnight Flyer with ex-Stone the Crows singer Maggie Bell. That same year, he played on hard-rock albums by Cozy Powell, Graham Bonnet, and Ozzy Osbourne. His keyboard work got wide exposure on “Naughty Naughty,” a 1984 hit by rock singer John Parr.

Black replaced Mick Ronson in the Spiders from Mars, the former backing band of David Bowie that regrouped to record as a separate entity. Their one autonomous album appeared in 1976 with a bright red cover on Pye Records. Black then reteamed with Knowles in the pop-vocal act Goldie, which issued four 1978/79 singles on Bronze. The first, “Making Up Again,” reached No. 7 on the UK Singles Chart and earned them a spot on Top of the Pops.

Kestrel has been reissued on CD more than 12 times since 1989. In 2013, it appeared as a double-CD with a second disc comprised of demos, alternate takes, and two unreleased tracks: “Part of the Machine” and “The Searcher.” The two-disc version has appeared on Belle Antique (Japan), Esoteric Recordings (UK), and Fly Records.

Phenomena
Phenomena were an English symphonic/hard-rock project headed by producer Tom Galley and his guitar...
The Housemartins
The Housemartins were an English pop-rock band from Kingston upon Hull that released two albums an...
Jack DeJohnette
Jack DeJohnette (born Aug. 9, 1942) is an American avant-jazz/funk drummer, pianist, and composer...
The Notations
The Notations were an American soul group from Chicago. Members: Clifford Curry, LaSalle Matthe...
The Raincoats
The Raincoats were an English avant-pop/folk band from London that released three albums, interspe...