Kaleidoscope was an English pop-psych band that released two albums on Fontana: Tangerine Dream (1967) and Faintly Blowing (1969). In 1970, they issued From Home to Home on Vertigo as Fairfield Parlour. Their proposed fourth album (a double) was recorded in 1970/71 but vaulted until 1991, when it appeared as White Faced Lady.

In February 1965, The Sidekicks played the Starlite Ballroom in Greenford as the opening act for Van Morrison‘s Them. On April 5, they opened for The Who at the Lakeside Club in Hendon, where Peter Daltrey lent his tambourine to Who frontman Roger Daltrey (no relation), who smashed it mid-performance. After an unsuccessful audition for Kinks producer Larry Page and a sequence of false starts, The Sidekicks renamed themselves The Key in November 1965.

During 1966, The Key developed a set of originals composed by Pumer (music) and Daltrey (lyrics). They demoed “You’re Not Mine,” “Holiday Maker,” and “Cold Sunday Morning 6:15,” but the tapes were confiscated when talks collapsed with the financier. After months without live work, they opened for The Mojos at Brunnel College that September. Their new stage act featured smoke bombs, blood capsules, and a poetry-reading girl. Late that year, their demo impressed music publisher Dick Leahy.

On January 2, 1967, the group signed to Fontana under a new name, Kaleidoscope, inspired by the burgeoning psychedelic movement. 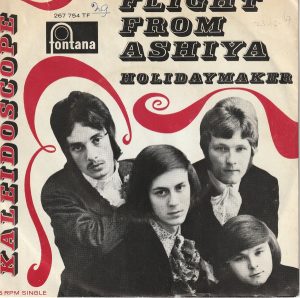 Kaleidoscope debuted with “Flight from Ashiya,” a lumbering waltz with droning bass and ringing guitar tones. The title comes from a 1964 Yul Brynner movie about a US Air Rescue Service mission from the Ashiya Air Base in Japan. However, the lyrics concern the impending crash of a commercial plane: “visions of childhood rush past my eyes, in seat number 30 somebody cries.” The song appeared as a single in September 1967, backed with the uptempo, brassy “Holidaymaker.” 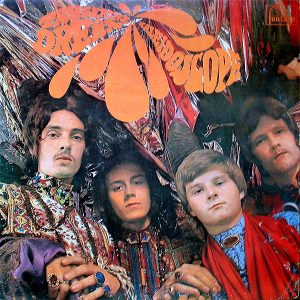 Both sides of the single appear on Kaleidoscope’s debut album, Tangerine Dream, released in November 1967 on Fontana. It features eleven Daltrey–Pumer originals, including “Dive Into Yesterday,” “Dear Nellie Goodrich,” “The Murder of Lewis Tollani,” “Please Excuse My Face,” “(Further Reflections) In the Room of Percussion,” and the band’s theme song.

Tangerine Dream sports a cover photo of Kaleidoscope in patterned psychedelic garb and accessories (beads, scarves) against a cellophane backdrop with orange bubble lettering. The back cover features liner notes by Daltrey, who offers a fantasy account of the band’s story, wherein the members (identified as Petre, Enak, Dios, and Santeeze) fish for musical notes in the Sea of Silk to write songs for a festival, arranged by King Kyzanzeer for the village of Now. 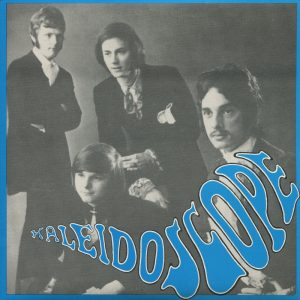 In late January 1968, Kaleidoscope issued their second single, the non-album “A Dream for Julie” (b/w “Please Excuse My Face”). In September, they released two non-album sides: “Jenny Artichoke” — inspired by Donovan‘s “Jennifer Juniper” — and “Just How Much You Are.”

The three 1968 non-album sides, along with a mono version of the first single, are included on CD pressings of Tangerine Dream, starting with the 1998 German reissue on Repertoire Records. 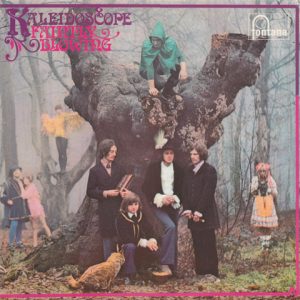 In March 1969, Kaleidoscope issued their fourth single, “Do It Again for Jeffrey,” backed with “Poem.” The b-side appears on Faintly Blowing, released the following month on Fontana. The albums features eleven additional Daltrey–Pumer originals, including “Love Song for Annie,” “Snap Dragon,” “A Story from Tom Bitz,” “Black Fjord,” “The Feathered Tiger,” and the title track.

Faintly Blowing sports a gatefold sleeve designed by Robin Nicol with photography by Johnny Clamp. It shows Kaleidoscope in a foggy forest with assorted characters from a Renaissance fair, including a green-clad elf (overhead) and a young woman in Alice in Wonderland garb. The inner-fold features a rust-tinted photo of the forest congregation, overlaid with Daltrey’s lyrics in white-type and the name+title in nouveau font.

BBC DJ David Symonds wrote the liner notes, where he goes on bizarre tangents before stating “Hear for yourself and fatten your cerebrum… Two flowers in a field could not be sweeter, nor breezes in the blue, higher than you… faintly blowing.” Symonds — who recently tried his hand at singing with the 1968 Philips single “Here Is the News” (b/w “Don’t Worry About a Thing”) — became Kaleidoscope’s new producer and manager.

In July 1969, Kaleidoscope issued the new a-side “Balloon,” backed with the Faintly Blowing track “If You So Wish.” 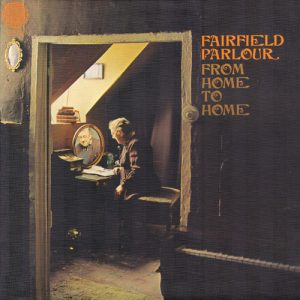 In April 1970, Kaleidoscope changed their name to Fairfield Parlour for the single “Bordeaux Rose” (b/w “Chalk On the Wall”), issued on the recently established post-psych label Vertigo. In July, they issued a maxi-single with four songs: “Just Another Day,” “Caraminda,” “I Am All the Animals,” and “Song for You.”

“Chalk” appears on From Home to Home, the group’s third album and their only one under the Fairfield Parlour name. It features eleven additional Daltrey–Pumer compositions, including “Emily,” “Sunnyside Cirkus,” “By Your Bedside,” “Soldier of the Flesh,” “In My Box,” and “The Glorious House of Arthur.” The album appeared in August 1970 on Vertigo.

From Home to Home, has a textured gatefold cover that shows an old man seated at a desk in an attic (front) with the band in an adjacent space (back). The design and photography are credited to Keef (aka Keith MacMillan), the artist behind most Vertigo album visuals of the period.

CD pressings of From Home to Home add “Bordeaux Rose,” the maxi-single, and the I Luv Wight single, plus the tracks “Baby, Stay for Tonight” and “Eye Witness.” “Baby” appeared on the flipside of a 1976 reissue of “Bordeaux.” 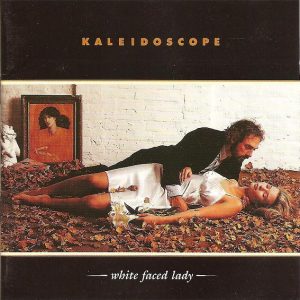 Kaleidoscope self-financed their fourth album, recorded at Morgan with Symonds during late 1970 and early 1971. Despite the promise of a deal for the finished product, the offer collapsed and the album was shelved until 1991, when the band self-pressed it as a 60-minute conceptual double-album, White Faced Lady.

The album features 18 Daltrey–Pumer numbers, including “White-Faced Lady,” “Nursey, Nursey,” “Picture With Conversation,” “Song from Jon,” “Standing,” and “The Locket.” The songs chart the story of Angel, a frosty-skinned misfit girl who rises to fame as an actress and later meets a tragic end. Track three, “Angel’s Song: Dear Elvis Presley…,” is a call-out to the icon. Pumer handled string arrangements, as heard on “Overture” and “Epitaph.”

Kaleidoscope gave their final performance of the era in 1972 in Bremen, Germany. While there, Bridgman engineered Ausschuss, the second album by Kraut rockers Eulenspygel. He plays percussion on two tracks: “Teufelskreis” and the 22-minute “Abfall.”

Nothing was heard from the band until the 1991 release of White Faced Lady on Kaleidoscope Record Company.

In 1995, Daltrey emerged as a solo artist with the CDs English Roses and Dream On. In the 2000s, he issued six discs on Chelsea Records; three in collaboration with American musician Damien Youth.

In 2003, archivists Circle issued Please Listen to the Pictures, comprised of the group’s 1967—71 BBC radio sessions as Kaleidoscope and Fairfield Parlour.

The surviving members of Kaleidoscope regrouped in 2013 for live shows. Pumer died in September 2020.