Jodo was an English hard-rock/blues band that released the album Guts on Decca in 1970. That same year, two members appeared on the MCA release Green Bullfrog, an impromptu jam session with members of Deep Purple.

Kimber was the namesake frontman of Bill Kimber & The Couriers, a London beat combo that performed extensively in South Africa, where they issued the 1964 covers album Shakin’ Up a Storm on Renown. As William E., he issued the harmony ballads “Lazy Life” and “Crazy How Love Slips Away” on Polydor with backing by Gordon Haskell. On Parlophone, he cut three 1968 singles as William E. Kimber.

Greenwood and Taylor were the rhythm section of Jasper, a blues-psych quintet that released the 1969 album Liberation on Spark Records.

Lawrence produced Jodo at the recommendation of Blackmore, who roped Alexander and Jordan into the Green Bullfrog project. 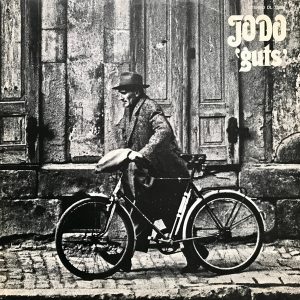 Jodo released Guts in late 1970 on Decca. It features 10 originals: three co-written by Alexander and Kimber (“Nightmare,” “Rat Race,” “It’s No Good”) and five co-credited to Taylor, including “One Night Stand,” “I’m Still Trying,” “Seventeen,” and “There’s Still Time.” Jordan co-wrote “What’s Your Number,” an uptempo soul-rocker on side one. The penultimate “Pushing” was written earlier with input from David James.

Musically, Guts furrows heavy blues-rock terrain with the sonic quaintness of Elias Hulk, the precision and counterpoint of Killing Floor, and the gritty professionalism of Rumplestiltskin.

Guts was initially a US-only release. In 1971, the album appeared in New Zealand on MCA. The sleeve on both issues — credited to photographer Bruno Schreck and graphic designer Virginia Clark — features a b&w image of a middle-aged man in a hat and trench coat, walking his bike along an old cobblestone street.

Taylor joined Little Free Rock, which cut a second album in 1971 without a release option. The vaulted album (nine songs) is included on the 1991 archival CD Time Is of No Consequence.

Greenwood joined brass-rockers Trifle, which issued the 1971 album First Meeting but disbanded after the sudden death of singer George Bean. He later joined ex-Tomorrow singer Keith West and alumni of Family and Quiver for the 1975 rustic rock one-off Moonrider.

Jordan released a surname-sake solo album on Capitol in 1972. Lawrence produced the album and co-wrote most of the songs with arranger Del Newman (Cat Stevens, Gordon Giltrap, Carly Simon, Ten Years After). That same year, Jordan joined the Les Humphries Singers for a four-year stint.

Guts was reissued on CD in 2007 by German archivists Lion Records, which also excavated post-psych titles from the US (Banchee, Boomerang, Euclid, Tin House) and Japan (Food Brain, Flower Travellin’ Band). In 2013, bootleggers Subway Records reissued the album on vinyl.

Pazop
Pazop were a Belgian avant-jazz/rock band that was active during the early 1970s. In 1972, the ban...
Esperanto
Esperanto were a multi-national art-rock/flamenco ensemble, formed in Brussels by violinist Raymon...
I-Level
I-Level were an English synth-funk trio from London that released two albums with accompanying sin...
The Four Seasons
The Four Seasons are an American pop-rock band that first rose to fame in the early 1960s with a s...
Wham!
Wham! were an English pop-soul duo from London that released four 1982/83 singles on Columbia/Inne...