Jenghiz Khan were a Belgian hard-rock/psych band that released the album Well Cut on Barclay in 1970. Bassist/singer Pierre Rapsat concurrently cut an album with Laurelie and issued a slew of singles with the Tenderfoot Kids.

Jenghiz Khan assembled at the turn of the 1970s around singer/bassist Pierre Rapsat (1948–2002). It was one of several projects he had going at the time. He also recorded an album with psych-rockers Laurelie in 1970 and cut seven 1969–71 singles with popsters the Tenderfoot Kids. 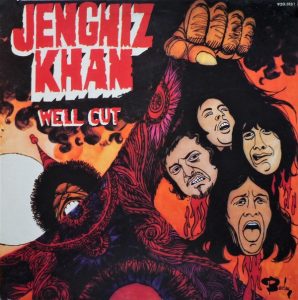 The lyrics on Well Cut are credited to journalist Piero Kenroll, listed here only by his first name. Compositional credits are split between guitarist François George (aka Friswa) and keyboardist Tim Brean. The recording was overseen by Recreation producer Eric Vion, Rapsat’s cohort from the Tenderfoot Kids. Original copies credit the bassist as Peter Raepsaet.

After Jenghiz Khan folded, Rapsat recorded as a solo artist, releasing 17 albums over the next quarter-century. Meanwhile, Friswa cut four singles over the span of the 1970s in solo and combo form. In 1981, the guitarist cut an electro-pop single — “N’Human” / “Last Chance Phonecall” — with assistance from Kenroll (aka Ay).