Jasper was an English blues-psych band that released the album Liberation on Spark Records in 1969. Half its members drifted soon afterward into Jodo and Trifle.

Jasper formed in 1967 as Union Blues. All five members — singer Nick Payne, guitarist Steve Radford, bassist Jon Taylor, drummer Chico Greenwood, and keyboardist Alan Fealdman — were all around twenty in 1969 when they morphed into Jasper, the name of a reddish-brown gemstone.

Along with Killing Floor, Jasper was one of the first and only serious post-psych acts signed to Spark Records, a recently established outlet for MOR pop and schlager singles. They recorded their album with producer Alvin Springtime. 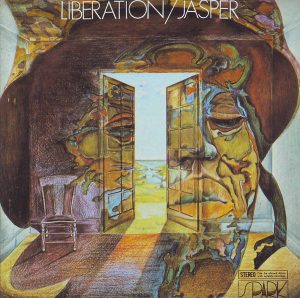 Jasper released Liberation in 1969 on Spark. Each side is framed with a variation of the titular theme: a cinematic instrumental in C minor with string and brass arrangements by Henry Lowther.

Fealdman composed the theme along with “Shelagh,” a minimalist blues dirge with cocktail guitar licks; and “The Beard,” a soul-jazz instrumental with fluttering Tull-like flute and swirling organ. Taylor and Payne co-wrote “Confusion,” a sparse two-chord R&B cut with snaky fuzztone and tribal drum patterns.

Liberation was engineered by Paul Holland, who did likewise for Michel Polnareff‘s 1971 release Polnareff’s and joined Rare Bird for their 1972/73 albums Epic Forest and Somebody’s Watching.

Greenwood and Taylor joined Jodo, a hard-rock/soul band that released the album Guts on Decca in 1970. Taylor proceeded to a record-less stint in Little Free Rock while Greenwood re-teamed with Fealdman in brass-rockers Trifle, which issued First Meeting on Dawn in 1971. Greenwood later surfaced in the 1975 one-off Moonrider with alumni of Family, Tomorrow, and Quiver. He later joined Pretty Things frontman Phil May in the Fallen Angels.

Fealdman resurfaced in FBI, a soul-funk ensemble that issued a self-titled album in 1976 on Tony Visconti’s Good Earth label. He joined Sniff ‘n’ the Tears for their 1978 debut album Fickle Heart.

Radford grouped with members of French rockers Choc in the band Aeroplane, which released the single “September In the Rain” on the Dutch Pink Elephant label in 1971.

Liberation was first reissued in 1996 on See For Miles Records Ltd. The CD reappeared in 2007 on Air Mail Archive (Japan, Russia). In 2019, French bootleggers Absinthe Records reissued the album on vinyl along with titles by Mogul Thrash, Andwellas Dream, The Trip, Waterloo, Horse, Fantasy, and Strawberry Path.

Jane Kennaway
Jane Kennaway is an English New Wave vocalist and songwriter who released four shortplayers betwee...
Clannad
Clannad are a Celtic Irish folk-rock/New Age collective that was initially active as a recording e...
Green Lyte Sunday
Green Lyte Sunday was an American psych-rock band from Dayton that released a self-titled album o...
Trader Horne
Trader Horne was an English/Irish folk-psych duo that released a standalone single and the album M...
Dave Davies
Dave Davies (born Feb. 3, 1947) is an English guitarist, songwriter, and singer who played in The ...