Jade was an English folk-rock trio that released the album Fly On Strangewings on DJM in 1970.

Jade formed in Westminster in 1970 when singing guitarists Marianne Segal and Dave Waite, a folk duo since the mid-1960s, teamed with bassist and keyboardist Rod Edwards, one-half of the pop duo Edwards Hand (formerly Picadilly Line). 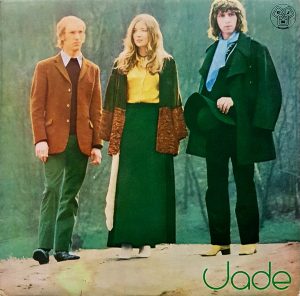 Jade released Fly On Strangewings in August 1970 on DJM. It contains 12 Segal originals, including “Five of Us,” “Reflection On a Harbour Wall,” “Mrs Adams,” and “Raven.”

Fly On Strangewings also features Mogul Thrash guitarist James Litherland on “Amongst Anenomies,” “Five of Us,” and “Reflections On a Harbour Wall.” With Thrash bandmate Micheal Rosen as a fellow guest on acoustic guitar, Litherland played lead electric on “Bad Magic” and “Away From the Family.”

The UK DJM release of Fly On Strangewings shows the trio standing still on an uphill dirt path to a forest. Segal, dressed in modest hippie attire, is flanked by a casual Waite (left) and a Regency styled Edwards (right). The inner-spread has the lyrics printed in white over a green-tinted collage of group pics. Photographer Barrie Wentzell captured these images; he also notched photographic credits on 1970 titles by Trapeze, Jody Grind (Far Canal), Elton John (Tumbleweed Connection), and Yes (the Howe-lineup shot on the US version of Time and a Word).

In the US, the trio was billed as Marianne Segal and Silver Jade; possibly to avoid confusion with the Cincinnati psych-pop band Jade, which released the album Faces of Jade on General American Records in 1970.

“Alan’s Song” was issued as a single on DJM (UK, US), Supreme Records (Belgium), and Hansa International (Germany), backed with “Amongst Anenomies.”

Segal and Waite are among a host of names on Songfall, the 1972 third solo album by Phillip Goodhand-Tait. In 1980, Segal resurfaced as Marianne Chase with the dance single “Love Amnesia” (b/w “Ghosts of Love“) on Double D Records. Both sides were written and produced by Eugene Moule, who also worked with Rikki Sylvan, Jon Anderson (Animation, 1982), and Zed.

In 1990, Segal issued the cassette album November with backing by journeyman folk drummer Dave Mattacks (Fairport Convention, Dr. Strangely Strange, Incredible String Band, Nick Drake, Spirogyra, Shelagh McDonald). She returned in 2007 with The Gathering, a collaboration with 21st century acid-folksters Circulus, having guested on their 2005 disc The Lick On the Tip of an Envelope Yet to Be Sent.

Fly On Strangewings made its first CD appearance in 2003 on the UK folk-psych specialty label Lightning Tree, which also reissued albums by Edwards Hand, Andwellas Dream, and Mighty Baby. This reissue includes the Wetton demos as bonus tracks.

To honor the rediscovery of their music, Jade regrouped for a one-off performance in November 2004. That same year, Lightning Tree released Paper Flowers, a 22-track CD of Segal/Waite demos (pre-Jade) recorded circa 1967–69.

In 2017, UK archivists Cherry Tree compiled Fly On Strangewings, Paper Flowers, and the 1970/71 demos onto a three-CD set with Kiss of the Buddha, comprised of 19 unreleased demo and master solo recordings by Segal, 15 of them dating from the ’70s.