Isotope was an English jazz-rock band that released three albums on Gull between 1974 and 1976. Guitarist Gary Boyle formed the band with veteran jazz bassist Jeff Clyne, who left after the first album and formed Turning Point. The second album, Illusion, features the signature fuzz bass of Hugh Hopper (ex-Soft Machine).

Boyle (b. 1941, Patna, India) originated in The Echoes, the backing band of singer Dusty Springfield. He joined between the completion and release of her 1965 second album Ev’rything’s Coming Up Dusty. In 1966, he joined Steampacket, where he replaced his Echoes predecessor Vic Briggs, who joined The Animals. With Boyle’s arrival, Steampacket became Trinity and issued the 1967 album Open on Marmalade Records (as Julie Driscoll, Brian Auger and the Trinity). Without Driscoll, they made the 1970 RCA album Befour, then Auger formed Oblivion Express. Boyle played on 1971/72 albums by Auger, the Keith Tippett Group, Mike Westbrook Orchestra, Norma Winstone, and Python Lee Jackson.

Clyne (b. 1937, London) started in the English jazz scene of the late 1950s, when he played with saxophonists Tubby Hayes and Ronnie Scott in the Jazz Couriers. He played on more than twenty jazz and vocal albums during the 1960s, including 1969 titles by Amalgam, Gordon Beck Trio, and the Don Rendell / Ian Carr Quintet. In 1970, he joined Carr’s Nucleus and played on their first three albums: Nucleus, Solar Plexus, and We’ll Talk About It Later. Clyne backed Driscoll on the singer’s 1971 solo album 1969, which features her husband Keith Tippett, who included Clyne in the 50-piece experimental big band Centipede for the double-album Septober Energy. Clyne also played on 1971/72 albums by Michael Gibbs, Neil Ardley (A Symphony of Amaranths) and ex-Affinity frontwoman Linda Hoyle (Pieces of Me).

In 1973, as Isotope gigged the UK jazz circuit, Boyle played on albums by Ann Odell (A Little Taste), Lynsey De Paul, and Stomu Yamash’ta‘s East Wind (Freedom Is Frightening). Clyne cut a live disc with Amalgam and sat in with the folk groups Richmond and Giles Farnaby’s Dream Band. He also played double-bass on the 1973 Deram release The “Not Forgotten” Association by ex-Battered Ornaments and Piblokto! frontman (and Jack Bruce lyricist) Pete Brown. 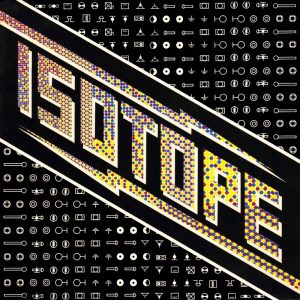 Isotope released their self-titled debut album in May 1974 on Gull (UK, Europe, NZ). Miller composed the five numbers on side one, which bookends with “Then There Were Four” and “Bite on This.” His “Upward Curve” opens side two, which ends with Boyle’s lone writing contribution, “Honkey Donkey.”

“Bite on This” descends on wah-wah licks with Boyle double-tracked over martial drum patterns. “Retracing My Steps” is a slow, shadowy cut with muted rhythmic interplay. Other tracks range from funky (“Do the Business”) and becalmed (“Sunshine Park”) to noodly and dense (“Oh Little Fat Man”). The penultimate “Windmills and Waterfalls” is a light, serene cut in the ECM vein with subtle piano and acoustic filigree.

Sessions took place at Advision Studios, London, in October 1973. Isotope co-produced the album with Tim Sharman, whose small list of credits include the UK Andromeda (a spinoff of freakbeat legends The Attack) and rustic-rockers Daddy Longlegs. The engineer on Isotope, Gary Martin, also worked on Freedom Is Frightening plus 1973/74 albums by David Essex, Gentle Giant (In a Glass House, The Power and the Glory), Herbie Mann, Soft Machine (Six), and ex-Softs bassist Hugh Hopper, a fellow East Wind player.

Isotope features liner notes by Steve Lake, a Melody Maker journalist who identifies Isotope as one of “only two bands [to] have ever achieved… a balance between rock energy and musical intelligence.” He singles out Morris as “the only English drummer… that can play the Billy Cobham superfast boogaloo thing.”

Given the album’s recording date, Isotope is possibly the first album by a UK-based act that bears the audible influence of the first two Mahavishnu Orchestra albums: The Inner Mounting Flame (1971) and Birds of Fire (January 1973). (The style’s third leading archetype, Hymn of the Seventh Galaxy by Return to Forever, hit shelves the same month Isotope recorded their debut.)

Isotope promoted the album with shows in France, Germany, and Scandinavia. By mid-year, the group broke in half due to tensions between Boyle and Clyne, who split with Miller to form Turning Point, which issued the 1977/78 Gull titles Creatures of the Night and Silent Promises. Meanwhile, Boyle and Morris played on the 1974 East Wind album One By One alongside Hopper, who they roped into a new Isotope lineup with keyboardist Laurence Scott. This lineup did a June–July UK tour, followed by August shows in Germany and the Netherlands. 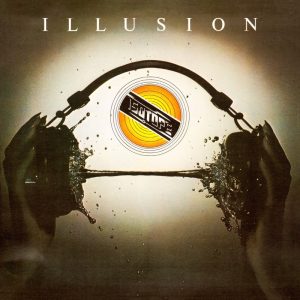 Isotope’s second album, Illusion, appeared in December 1974 on Gull. Boyle contributed four songs, including the side openers “Illusion” and “Frog.” Hopper wrote five numbers, including the inner-core of side two: “Sliding Dogs, Lion Sandwich,” “Golden Section” and “Lily Kong.” Morris and Boyle co-wrote the centerpiece of side one, “Spanish Sun.” Scott contributed “Temper Tantrum,” the filigree whirlwind that closes the album.

“Frog” leaps in with a jerky 10/8 pattern (6/4 + 4/4), which cuts to an even meter, marked by Boyle’s scaling leads over Hopper’s smoldering fuzz-bass ostinato (in G minor), upswept throughout by Miller’s brisk fills.

On “Spanish Sun” (7:48), Boyle juggles sustained leads and lightning cadenzas over a dark, desolate rhythmless stretch; underlined with Scott’s milky, glistening Fender tones. Morris asserts himself at 4:10 with subtle drums and ride cymbals that gradually spur Scott, then Boyle along to the finish.

Scott whips out a Clavinet on “Rangoon Creeper,” a funky mid-tempo track that cuts midway to speedier passages. “E Dorian” is a fast, ensemblic cut that Hopper gives the fuzzy wraparound; it fades on backward cymbals. “Lily Kong” crawls through sonic murk (in A), cuts to an upward refrain and rides out with urgency. “Marin County Girl” is a quiet piano–acoustic number.

Illusion was produced by Poli Palmer, a longtime multi-instrumentalist in Family and its spinoff, Streetwalkers. Martin engineered Illusion just ahead of Free Hand, the 1975 seventh album by Gentle Giant.

Gull secured a distribution deal via Motown in the US, where Illusion appeared in 1975. That spring, Isotope did a well-received stateside tour, followed by a European jaunt with a newly available De Souza. That fall, they toured Britain with auxiliary drummer Jeff Seopardie, an eventual participant in the multi-national jazz-funk group Pacific Eardrum. 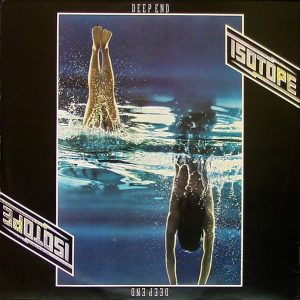 Isotope released their third album, Deep End, in 1976 on Gull. Side one features a track apiece by Boyle (“Mr. M’s Picture”), Roberts (“Crunch Cake”), Kronberger (“Another Side”), and Morris (“Black Sand”). Side two contains “Fonebone” and the Scott leftover “Pipe Dream,” plus Boyle’s “Attila” and the lengthy, closing title track.

“Deep End” (8:22) emerges from glistening chimes and cymbal smoke. It forms a tight, staccato bass pattern (in A7) that repeats unabated through pummeling drum fills. A desolate stretch allows the piano to find its groove, which runs freely and nimbly over the resumed pattern. Later, Boyle overlays the pattern with chordal shards and oozing runs.

“Pipe Dream” (6:27) is a mid-tempo funk workout (ala “Sorceress”), framed by a two-note bassline (B♭–A♭–B♭) with modest runs up and down the Fender keyboard. Boyle offers tight rhythmic accompaniment but doesn’t overtake the piece until 4:03, when the track morphs into a speedy, blistering showcase of pyrotechnics.

“Attila” is a medium-uptempo showcase of sparkling Fender and fuzzy Gibson runs over a pocketed bass groove. “Crunch Cake” spins on a bass pattern (in G7 minor), driven by a rattling hi-hat beat with fluid Fender and tight, thematic guitar parts. “Another Side” is an ECM-style spotlight of piano block chords, underpinned with acoustic filigree, female vocalizing, and two-note contrabass (roots and thirds over a modulating key center).

The credits list three assistant engineers, including two (Geoff Leach, Neil Ross) whose names also appear on Wind and Wuthering, the second album of 1976 by Genesis. A third assistant, Stephen W. Tayler, worked on 1976/77 albums by Kayak (Starlight Dancer), Walden (Garden of Love Light), and Shakti. All three assistants worked on No Second Chance, the 1977 sophomore effort by Charlie.

Deep End sports cover photography by Phil Jude, who also did visuals for 1976/77 albums by Automatic Fine Tuning, Ardley (Kaleidoscope of Rainbows), Colosseum II (Electric Savage), and Patrick Moraz (The Story of i).

Gary Boyle cut a solo album, the 1977 Gull release The Dancer. It features backing by Lumley, Kronberger, Pert, Seopardie, Shone, and (on one cut) keyboardist Rod Argent. Boyle followed this with 1978’s Electric Glide, where he duets with guitarist Gary Moore on two tracks. His third album, Step Out!, appeared on Pick Up Records in 1980.

Frank Roberts is one of five keyboardists (along with Bayeté Todd Cochran of Automatic Man) credited on the 1976 debut album by Liverpudlian soul-funksters The Real Thing. He plays on three cuts (“The Lonely Sea and the Sky,” “Crumble,” “Spanish Knee”) on Hopper Tunity Box, the 1977 second solo album by Hugh Hopper. Roberts also played on recordings by Dudu Pukwana and Robert Wyatt, including the singer’s remake of the Chic anthem “At Last I Am Free.”

Dan K. Brown played on the 1982 Poljazz release Hysterical Woman by Stinky Winkles. That same year, he joined Geoff Serle’s Research for the album Laws of Motion, released on the German avant label View. He supplemented The Fixx on one track (“The Sign of Fire”) on their 1983 second album Reach the Beach and subsequently joined the band.