Home was an English rustic art-rock band from London, best remembered for the 1972 epic “Lady of the Birds” and the 1973 concept album The Alchemist. They released three albums on CBS.

Home formed in 1970 when bassist/singer Cliff Williams (b. 1949) and guitarist/singer Laurie Wisefield (b. 1952) teamed with singer/guitarist Mick Stubbs and drummer Mick Cook.

Williams and Wisefield were fresh off a stint in Sugar, an unsigned rock band. Stubbs hailed from beatsters The Blue Rondos, which issued two 1964/65 singles on Pye.

In 1971, Home signed to CBS with ex-Man keyboardist Clive John as an unofficial fifth member. 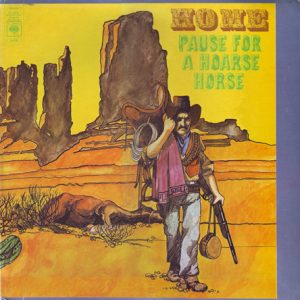 Home released their first album, Pause for a Hoarse Horse, in August 1971 on CBS (UK, Netherlands) and Epic (US, Canada). It contains 11 tracks, nine composed by Stubbs, including “Red E. Lewis and the Red Caps,” “Bad Days,” “Family,” “Moses,” “Mother,” and the title track. Side one concludes with the group-written “In My Time.” The penultimate short, “Welwyn Garden City Blues,” is a Stubbs/Wisefield co-write.

Pause for a Hoarse Horse was produced by Mel Baister and Bee Gees conductor Bill Shepherd. The gatefold cover illustration depicts a frontiersman walking from a perished horse in Monument Valley near tall cacti.

Home, along with Stone the Crows, supported Led Zeppelin at the second Electric Magic Show at the Wembley Empire Pool on November 20, 1971. In the following months, they opened for Faces and labelmates Argent and Jeff Beck, respectively touring behind Ring of Hands and Rough and Ready. 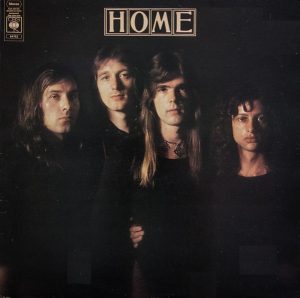 Home’s self-titled second album appeared in 1972 on CBS in the UK, Italy, Netherlands, and New Zealand. Stubbs composed three songs on the first side (“Knave,” “Rise Up,” “Dear Lord”) and two on the second (“Baby Friend of Mine,” “Western Front”). He co-wrote the centerpiece of side one, “Fancy Lady, Hollywood Child,” with lyricist David Skillen, the former vocalist of Aardvark who played a greater role on the next Home album. Home is bookended by two group-written numbers: “Dreamer” and the nine-minute “Lady of the Birds.”

Home sports a single sleeve with a black-clad middle shot of the band by photographer Denis Waugh, also credited with 1972 album visuals for Johnny Nash and Mark-Almond. The denim-clad full shot (back) is credited to Bruce Rae, who also captured images of Rick Wakeman (The Six Wives of Henry VIII) and Joe Jackson (I’m the Man).

“Lady of the Birds” appears on the 1973 Germany CBS comp Poster Press Vol. 1 with tracks by Brian Auger, Chi Coltrane, Sly and the Family Stone, and select acts from the earlier Dutch comp.

Home made converts during a two-night opening slot for Mott the Hoople in October 1972 at London’s Rainbow Theatre. The following March, they opened for Slade at the Wembley Empire Pool. 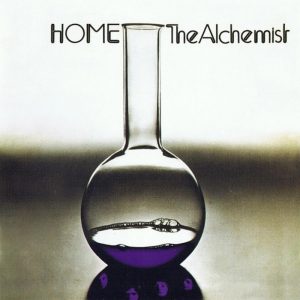 Home released their third album, The Alchemist, in July 1973 on CBS (UK, Netherlands, Oceania). It’s a concept album based on the 1960 “fantastic realism” novel Morning of the Magicians (aka Le Matin des magiciens) by French author Louis Pauwels. The album consists of two six-part song suites composed by the band with lyrics by Skillen, who explains the story in the liner notes.

The Alchemist is housed in a gatefold sleeve with an illustrated 12-panel plot summary for each track. It tells the story of two boys from Corwall who befriend an old man (“Schooldays”). One of the boys revisits the dying man, who shares information that changes the youngster’s life (“The Old Dying Man”). The boy proceeds to live in the old man’s house (“Time Passes By”). When he warns the townfolk of an impending disaster, they turns on him (“The Old Man Calling”), only to suffer the fate (“The Disaster”).

The boy, suddenly an old man himself (“The Sun’s Revenge”), goes back into town with his friend (“A Secret to Keep”). He’s embraced by the populace (“The Brass Band Played,” “Rejoicing”) but disaster occurs a second time. The next day, the townfolk hunt down the old man, who falls impaled into his friend’s arm (“The Death of the Alchemist”). In the final panel, the friend undergoes the same aging process (“The Alchemist”).

The Alchemist was produced by Anthony with assistance from Stone and engineers Ted Sharp (The Peddlers, Nutz, Thin Lizzy, Barclay James Harvest) and Pat Moran (Budgie, CMU, Gypsy, Skin Alley). Moran, the former singer of Spring, handled the sessions at Rockfield Studios in Monmouth, Wales. The remaining sessions took place at Trident near the time of Anthony’s work on For Your Pleasure by Roxy Music and the debut album by Queen.

Art director Rosław Szaybo oversaw the visual packaging of The Alchemist, which includes the beaker cover image by photographer John Brown, the inner-fold art by illustrator William Rankin, and the wire-font typography by Hundred Percent Studio.

In March 1974, Al Stewart enlisted Home as his backing band for the US leg of his tour behind Past, Present and Future. This prompted Stubbs departure from the group, which disbanded at the end of the May–June tour. Recordings for a proposed fourth album went unreleased.

Wisefield joined Wishbone Ash in time for their 1974 album There’s the Rub. He stayed with the band until their 1984 release Raw to the Bone. During the late ’80s and early ’90s, he served as a backing player for Tina Turner and Roger Chapman.

Williams joined Bandit, a soul-funk-rock supergroup with guitarist James Litherland (Colosseum, Mogul Thrash) and Scottish singer Jim Diamond. They released one album in 1976 on Arista. In 1978, he joined Aussie rockers AC/DC for a four-decade run.

Cook joined the Groundhogs and played on their 1976 albums Crosscut Saw and Black Diamond.

Stubbs continued as a songwriter. In 1979, Lulu recorded the Skillen/Stubbs song “I Love to Boogie” for a single on Elton John‘s Rocket Records label.