Herbie Hancock (born April 12, 1940) is an American jazz keyboardist who has been musically active since the late 1950s.

Hancock was born in Chicago on April 12, 1940, the middle child of government meat inspector Wayman Edward Hancock and secretary Winnie Belle. Herbie was named after singer and actor Herb Jeffries. At age seven, he started piano lessons and was soon recognized as a child prodigy. On February 5, 1952, at age 11, he played the first movement of Mozart’s Piano Concerto No. 26 in D Major, K. 537 (Coronation) at a young people’s concert with the Chicago Symphony Orchestra.

Hancock was an autodidact through much of his teens as he trained his ear to the harmonic concepts of pianist/arrangers Maurice Ravel, Clare Fischer, Bill Evans, Gil Evans, and Chris Anderson. In 1960, he briefly studied with neoromantic composer Vittorio Giannini.

In 1961, Hancock made his recording debut on the albums Royal Flush and Out of this World by trumpeter Donald Byrd, the latter credited to the Pepper Adams Donald Byrd Quintet. His reputation grew quickly and on May 28, 1962, Hancock recorded his first album at Van Gelder Studio, Englewood Cliffs, New Jersey.

“Watermelon Man,” with its distinct brass refrain, became a jazz standard with more than 200 versions recorded during the ensuing decades. Soon after the original, Cuban percussionist Mongo Santamaría scored a Billboard Top 10 hit with a Latinized interpretation of the piece. Hancock himself would rearrange the tune in jazz-funk form for his 1973 release Head Hunters.

On March 19, 1963, Hancock recorded his second album, My Point of View, released the following September. The set consists of five originals, including “King Cobra,” “Blind Man, Blind Man,” and “The Pleasure Is Mine.” For this release, Hancock leads a sextet consisting of Byrd, tenor saxist Hank Mobley, trombonist Grachan Moncur III, bassist Chuck Israels, and drummer Tony Williams. Guitarist Grant Green plays on “Blind Man” and the album-closer “And What If I Don’t.” This marks one of the earliest recorded appearances of Williams, aged 17 at the time of the session.

That May, Hancock and Williams partook in a New York session that yielded three tracks (“Seven Steps to Heaven,” “So Near, So Far,” and “Joshua”) for Seven Steps to Heaven, the 1963 Columbia release by Miles Davis. Hancock also played on 1963 Blue Note albums by Kenny Dorham (Una Mas (One More Time)) and Grant Green (Feelin’ the Spirit), as well as the Riverside Records release Swamp Seed by Jimmy Heath and Brass.

Before My Point of View hit shelves, Hancock held a session on August 30, 1963, with bassist Paul Chambers, drummer Willie Bobo, and percussionist Osvaldo “Chihuahua” Martinez. The fruit of this session, Inventions & Dimensions, appeared in early 1964. It features five Hancock originals, including the percussive rattling “Succotash,” the ivory-scaling ballad “Mimosa,” and the 11-minute walking bassline strut “Triangle.” While predominantly rooted in post-bop and modal jazz, the presence of Bobo and Martinez lends a Latin flavor to these numbers. In 1974, the album was re-released as Succotash with the sides reversed. 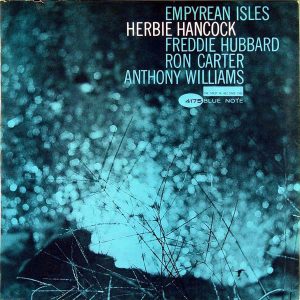 Rhythmically, the four Empyrean Isles tracks range from buoyant and galloping on “One Finger Snap,” dominated by Hubbard’s fluttering trumpet; to light and swinging on “Oliloqui Valley,” where Williams bombards Hancock’s tinkly piano runs. Hancock and Hubbard forge an interlocking riff across the syncopated precision of “Cantaloupe Island,” another much-covered jazz standard. On “The Egg,” Hubbard blows dissonance over Hancock’s blocky 6/4 figure and Williams’ persistent snare-rolls.

During 1964, Hancock also played on albums by Mobley (No Room for Squares), Sonny Rollins (Now’s The Time!), and the debut album by Williams (Life Time). As a member of the Miles Davis Quintet, Hancock appears on the 1964 Columbia release Miles Davis In Europe. 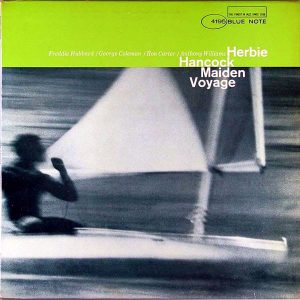 On March 17, 1965, Hancock held his fifth session at Van Gelder, this time with Hubbard, Carter, Williams, and tenor saxist George Coleman. The resulting Maiden Voyage appeared that year with five originals, including “The Eye of the Hurricane,” “Dolphin Dance,” and the much-covered title track. This was the last in his consecutive run of Lion-produced Blue Note titles, though he would cut two more albums for the label in the later ’60s.

By this time, Hancock’s role as a sideman proliferated. In 1965 alone, he appeared on Blue Note titles by Byrd (I’m Tryin’ to Get Home (Brass With Voices)), Mobley (The Turnaround), Stanley Turrentine (Joyride), Jackie McLean (It’s Time!), and Grachan Moncur III (Some Other Stuff). On Columbia, he played on that year’s E.S.P. by Miles Davis and Bob Brookmeyer and Friends ‎by trombonist Bob Brookmeyer.