Heaven & Earth were an American soul group from Chicago that released the album I Can’t Seem to Forget You on GEC in 1976, followed by two albums on Mercury in 1978/79 and a fourth on WMOT in 1981. 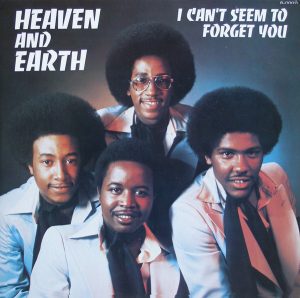 Heaven & Earth were formed by teenage brothers Dwight and James Dukes in 1974. They issued their first single, “I Can’t Seem to Forget You” (b/w “Promises”), in 1975 on 20th Century-subsidiary GEC. The a-side became the title-track of their debut album, released on said label in 1976. It features eight additional numbers, including “The Message,” “The Window Lady,” “Let Me Back In,” and “Now That I’ve Got You, I’ll Be Flying High.” The album was produced by manager Clarence Johnson (The Lovelites, The Chi-Lites, Starvue). Most of the songs were written by the team of Jerline Shelton and Maurice Commander.

In a controversial move, lead vocalist Michael Brown was cut from the lineup in 1977. The band signed to Mercury and released the 1978/79 albums Heaven and Earth and Fantasy, both co-produced by Johnson with arrangements by jazz pianist Floyd Morris. The albums yielded two singles apiece. The group’s final album, That’s Love, appeared on Larry Lavin’s WMOT Records in 1981.