Gun was an English psych-rock band from Redbridge that released two albums on CBS/Epic between 1968 and 1969. The guitar/bass/vocal team of brothers Paul and Adrian Gurvitz subsequently co-led the band Three Man Army and its followup The Baker Gurvitz Army during the early-to-mid 1970s.

Gun had its roots in mod-rockers The Knack, an evolution of The Londoners, formed in 1963 by guitarists Paul Gurvitz and Brian Morris.

It all started in 1963 at an Ilford hair salon called Paul Anthony, run by hairdresser Paul Gurvitz (b. 1944), who also played guitar. One of his customers, Brian Morris, turned out to be a guitarist and singer. They formed The Londoners and used the salon as rehearsal space.

Paul’s father, Sam Gurvitz, had industry ties as a former road manager for The Shadows. He linked The Londoners up with his current client, American rockabilly singer Gene Vincent. They served as Vincent’s backing band for a round of gigs at Germany’s Star Club. While there, they cut covers of Elvis Presley (“That’s My Desire”) and Sam Cooke (“Bring It On Home To Me”) for the German market.

Back in London, the band changed their name to The Knack, inspired by the 1965 Richard Lester mod movie The Knack …and How to Get It. The lineup now consisted of bassist Gearie Kenworthy, drummer Topper Clay, and Morris and Gurvitz on guitar and vocals. During this period, Gurvitz modified his surname to Curtis, which he thought was more marketable. They signed with Decca and teamed with producer Larry Page (The Kinks, The Clique, The Troggs).

After Decca dropped The Knack, Sam got them signed to Pye-subsidiary Piccadilly, where they issued three singles in 1966, starting with “Did You Ever Have to Make Up Your Mind,” a cover of the recent Lovin’ Spoonful hit (b/w “Red Hearts”). They followed that with “Stop (Before You Get Me Going),” which hit #22 on the Radio London chart (b/w “Younger Girl,” another Spoonful cover). That and its followup, “Save All My Love for Joey” (b/w “Take Your Love”), were issued in Australia on Astor.

In February 1967, The Knack issued their first self-penned single: “(The Man From the) Marriage Guidance and Advice Bureau,” a Morris original, backed with “Dolly Catcher Man,” credited to Curtis (Gurvitz).

Months later, Piccadilly floundered and The Knack, minus Morris and Clay, renamed itself The Gun with Gurvitz, Kenworthy, organist Tim Mycroft, and drummer Louie Farrell. They played London’s psychedelic haunts, including the famed UFO Club, where they supported Pink Floyd, Tomorrow, and The Crazy World of Arthur Brown. For a brief time, ex-Warriors singer Jon Anderson fronted Gun (en route to Mabel Greer’s Toyshop, which morphed into Yes).

In late 1967, The Gun cut an intended single, “Lights on the Wall.” With its light harmonies, crisp drum rolls, spiraling organ line, gruff low-end riff refrains, and kaleidoscopic fade-out, the song echoes the toytown pop-psych style of contemporaries The Move and The Idle Race. Despite its non-release, they made two appearances on the BBC music program Top Gear.

In early 1968, the band reconfigured once more as Gun, consisting of Farrell, Paul Gurvitz (on bass and vocals), and his guitarist brother Adrian Gurvitz (b. 1949), who also used the Curtis pseudonym. In this new formation, Gun was a powertrio in the mold of Cream and the Jimi Hendrix Experience. 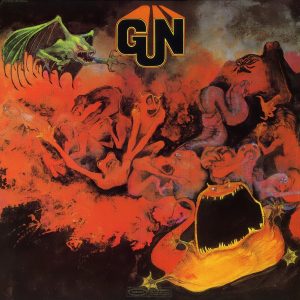 Gun released their self-titled debut album in 1968 on CBS (UK, Europe, Oceania). Side 1 contains five songs, mostly in the four-minute range, including “The Sad Saga of the Boy and the Bee” and “Yellow Cab Man.” Side 2 consists of three tracks, ending with the 12-minute “Take Off.” Adrian Gurvitz wrote everything (credited as A. Curtis) apart from “Yellow Cab,” a co-write with arranger Jimmy Parsons. When issued as a single that October, “Race with the Devil,” charted in several territories and prompted Epic to issue the album in North America. “Rupert’s Travels” appeared as the b-side of the non-album track “Drives You Mad,” a brisk, pounding rocker with a pronged, scaly, stinging guitar figure in A minor. 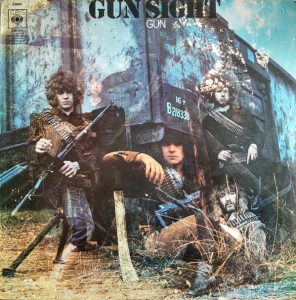 The trio’s second album, Gun Sight, appeared in November 1969. This time, Paul Gurvitz wrote all the songs (credited as Paul Curtis). Side 1 features four songs, bookended by “Head in the Clouds” and “Dreams and Screams.” The second side features four proper songs and two instrumental miniatures, “Lady Ink” (Pt. 1 and 2), that encase the folksy, acoustic “Oh Lady You.”

Gun Sight was produced by Goodison with arrangements by Zack Laurence, who also worked on Robin Gibb‘s 1970 solo album Robin’s Reign. Two singles came from the album: “Long Hair Wildman” (b/w “Drown Yourself in the River”) and “Hobo” (b/w the none-album “Don’t Look Back”).

Farrell jumped ship soon enough to play on the 1969 album Made In England by Bulldog Breed. He was briefly replaced by drummer Geoff Britton, who soon turned up in East of Eden. In 1970, Gun issued one further non-album a-side, “Runnin’ Wild.”

The brothers reclaimed the Gurvitz surname and briefly went their separate ways. Paul reunited with Morris, now called Brian Parrish, in the combo Parrish & Gurvitz. They recorded a self-titled album with drummer Mike Kellie, then in between stints in Spooky Tooth. It was produced by George Martin and released in 1971 on Regal Zonophone. The team recorded a second album with bassist Rick Willis (Cochise, Frampton’s Camel), and keyboardist Micky Gallagher (Skip Bifferty, ARC, Ian Dury & the Blockheads), but it went unreleased until paired with the first on a 2006 compilation CD.

Adrian joined the touring band of American drummer Buddy Miles. In 1971, he regrouped with Paul in Three Man Army, which released the album A Third of a Lifetime with Kellie. After playing on Buddy’s 1973 release Chapter VII, the brothers cut three further Three Man Army albums with ex-Jeff Beck/May Blitz drummer Tony Newman. When Newman left to tour with David Bowie and record with Boxer, the brothers formed Baker Gurvitz Army with drumming legend Ginger Baker (Graham Bond Organization, Cream, Air Force). They released three albums between 1974 and 1976: The Baker Gurvitz Army, Elysian Encounter, and Hearts on Fire. Concurrently, the brothers played on two albums by the Graham Edge Band, formed by the Moodies drummer.