Gryphon was an English Elizabethan symphonic folk and rock band that released four albums on Transatlantic, including the popular 1974 titles Midnight Mushrumps and Red Queen to Gryphon Three. With a revised lineup, they switched to Harvest for the 1977 album Treason.

Harvey (b. 1953, Enfield, Middlesex) took up the recorder at age four. As a teenager, he played clarinet in the British Youth Orchestra. While enrolled at the Royal College, he mastered flute, mandolin, keyboards, and the krumhorn: a bent woodwind of the Renaissance. He declined an invite by the London Philharmonic to join Musica Reservata, an ensemble devoted to early music.

In 1972, Harvey formed an acoustic partnership with Gulland, a reedist, keyboardist and fellow RCM alumni. They started a band with percussionist Dave Oberlé and 18-year-old guitarist Graeme Taylor.

Naming their act Gryphon — an alternate spelling of griffon: a mythological lion/eagle hybrid creature — they made their live debut at the Stone Parish Church in Aylesbury. In an early promo for the band, publicist Martin Smith wrote “Imagine Henry VIII in a rock ‘n’ roll band – think Gryphon.” 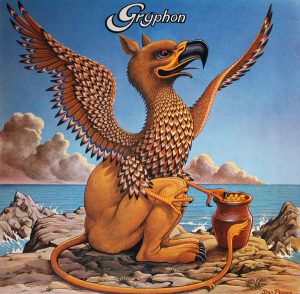 Gryphon released their self-titled debut album in June 1973 on Transatlantic Records, an established folk-specialty label. The album contains nine adaptations of Renaissance pieces from anonymous sources, arranged by Taylor (“Three Jolly Butchers”), Gulland (“Sir Gavin Grimbold”), and the entire band (“Kemp’s Jig,” “The Unquiet Grave,” “Estampie,” “The Astrologer”). One number, “Pastime With Good Company,” is credited to Henry VIII. Four of the numbers are under two minutes, including the 90-second Taylor/Harvey cut “Touch and Go.” Side two contains the Taylor original “Crossing the Stiles” and the group-written “Juniper Suite.”

Gulland and Harvey both play krumhorn. Taylor’s arsenal consists of harpsichord, organ, and guitar. Oberlé handles glockenspiel in addition to drums and percussion. Harvey himself plays a list of instruments, including classical guitar, mandolin, recorder, and harmonium.

Gryphon appeared in the UK and Japan in a gatefold sleeve with a cover illustration by Dan Pearce. It shows a griffon perched on a jetty, dipping into a pot of nuts. The inner-spread features credits, song notes, and a sepia group-rehearsal pic by label photographer Roger Perry. In Australia, the album appeared in a single sleeve with deeper colors.

Transatlantic accompanied the release of Gryphon with “Glastonbury Carol,” a white-label promo single written by the band, apocryphally for a Glastonbury Fayre festival that occurred before they existed. 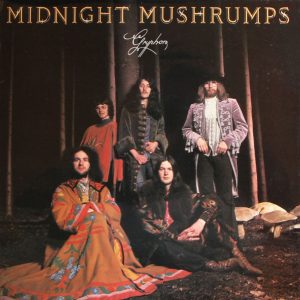 Side one consists of the nineteen-minute title piece, composed by Harvey. The flipside contains five numbers in the 3–5-minute range: two Taylor originals (“The Last Flash of Gaberdine Tailor,” “Dubbel Dutch”), Gulland’s self-referential “Gulland Rock,” the group-written “Ethelion,” and the band-arranged traditional “The Ploughboy’s Dream.”

For the Midnight Mushrumps cover, Gryphon are pictured in neo-Renaissance hippie attire by Clive Boursnell. Initial copies came with a sticker, an eight page booklet, and a six-fold poster.

“The Ploughboy’s Dream” appears with the earlier “Pastime With Good Company” on Transatlantic Cable, a 1974 two-LP comp with tracks by Unicorn, Carolanne Pegg, several aforementioned labelmates, and the psych-era cut “Granny Takes a Trip” by the Purple Gang.

Just as the album hit shelves, Gryphon provided music for a stage production of Shakespeare’s The Tempest at the National Theatre in London, directed by Peter Hall. The title Midnight Mushrumps derives from a phrase in the play.

Gryphon befriended Rick Wakeman, who lobbied for their release in America and linked them with Yes manager Brian Lane. They recorded their third album at Chipping Norton in August 1974. 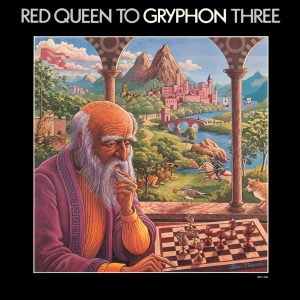 Red Queen to Gryphon Three appeared that December on Transatlantic (UK, Japan, NZ) and Bell Records (US). It features two lengthy instrumentals per side, including “Opening Move” (9:42) and “Checkmate” (9:50), both composed by the core quartet. Taylor and Gulland co-composed “Second Spasm” (8:15); Nestor collaborated with the pair on “Lament” (10:45).

Pearce illustrated the cover: an old man looking over a chess board, seated in a temple overlooking a scenic backdrop. The griffon from the 1973 album appears in the center background. The image is alternately framed in blue (Transatlantic) and black (Bell). The back contains tinted performance shots of each member.

Gryphon toured the UK and North America as an opening act for Yes, who they joined on stage for encores on select dates. On November 20, 1974, they played to an audience of 20,000 at New York’s Madison Square Garden. Their set comprised four numbers: “Midnight Mushrumps,” “Ethelion,” “Dubbel Dutch,” and “Checkmate.” On December 2, the two bands played with John McLaughlin and the Mahavishnu Orchestra at the Houston Astrodome.

Concurrent to the Red Queen sessions, Harvey recorded Divisions On a Ground (An Introduction to the Recorder And Its Music), and album of Baroque pieces by Handel, Vivaldi, Godfrey Finger, Jacob van Eyck, and Jean Baptiste Loeillet. Skeaping engineered the album, which features Harvey on recorder accompanied by harpsichord and a five-piece string section, including cellist Catherine Finnis (Centipede). Divisions appeared on Transatlantic in 1975 (UK only).

Harvey also appeared on 1974 folk-rock titles by the duo’s Richard & Linda Thompson (with Gulland) and Ashley Hutchings & John Kirkpatrick, both on Island Records.

Prior to the fourth album, Nestor cleared out for ex-Quincicasm bassist and flutist Malcolm Bennett. 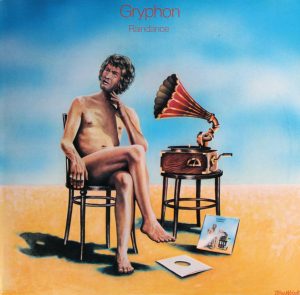 Gryphon released Raindance in late 1975 on Transatlantic (UK, Oceania, Germany). The album was largely composed by Harvey, who wrote the title track and the 16-minute “(Ein Klein) Heldenleben” that consumes most of side two, plus the interlude “Ormolu” and the side openers “Down the Dog” and “Wallbanger.” Taylor contributed “Fontinental Version,” “Don’t Say Go,” and “Le Cabrioleur est Dans le Mouchoir.” Side one contains their only modern pop cover: The Beatles‘ 1968 ballad “Mother Nature’s Son.”

The cover shows a nude man seated in the barren outdoors with his head ajar as an adjacent gramophone plays a record whose cover replicates the image. On the back, rain pours from the blue sky on the now-hairless man with the original griffon seen afar. It was illustrated by Tony Wright, the artist behind ’70s-era covers for numerous Island acts (Bob Marley, Ian Gillan Band, John Martyn, Kevin Ayers, Third World, Traffic).

In Canada, Raindance appeared in 1979 on the new wave label Bomb Records with an alternate cover that depicts pirouetting ballerina legs in orange tights over a blue puddle.

Also in 1975, Oberlé, Taylor, and Bennett backed Yes guitarist Steve Howe on the track “The Nature of the Sea” from his debut solo album Beginnings, which also features Bennett on “Pleasure Stole the Night” alongside ex-Yes drummer Bill Bruford.

Taylor and Bennett left Gryphon and formed Precious Little with drummer Paul Aitken. That group, minus Bennett, morphed into pop-punks The Banned, which reached the UK Singles Chart (#36, 1977) with a cover of the garage-rock nugget “Little Girl,” originally a 1966 hit for the Syndicate of Sound. Taylor also played on 1976–78 albums by the folk-rock supergroup Albion Band. 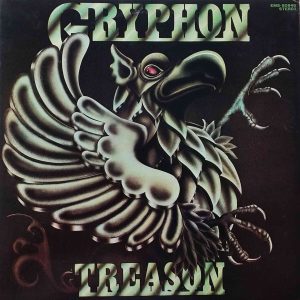 Gryphon’s fifth album, Treason, appeared on Harvest in April 1977. The band employed lyricist Tim Sebastion, who co-wrote four songs with Harvey — “Spring Song,” “Round & Round,” “Falero Lady,” “Fall of the Leaf” — plus one apiece with Gulland (“Flash in the Pantry”) and Foster (“Major Disaster”). Harvey sole-composed “Snakes and Ladders,” a quirky instrumental on side two.

“Flash In the Pantry” was engineered by Be-Bop Deluxe producer John Leckie, who proliferated on contemporary titles by Anthony Moore, Doctors of Madness, Magazine, Roy Harper, and XTC. “Fall of the Leaf” was recorded at Abbey Road Studio I.

Treason sports an image of a metallic, leafy griffon illustrated by Pat Elliott Shircore. Original copies contain a mint inner-sleeve with lyrics printed in white. Harvest issued a four-minute edit of “Spring Song” on 7″ (b/w “The Fall of the Leaf”).

Harvey played on ‘Raok Dilestra – Avant D’accoster, the 1977 concept album by Alan Stivell. Since that time, he’s appeared on dozens of multi-artist releases on the library labels ASV and KPM. As a backing musician, he’s played on albums by Hans Zimmer, Gerry Rafferty, Gordon Giltrap, John Williams, Kate Bush, Sweet, Winds of Change, and Zaine Griff. In 1991, he collaborated with Elvis Costello on music for the Channel Four drama series G.B.H.

Taylor created music for a 1977 National Theatre staging of the medieval play The Mysteries and played on 1978 albums by Lucio Battisti and Mandy Morton & Spriguns (Magic Lady). He later surfaced in folksters Home Service, which released three albums on three different labels between 1984 and 1986.

Gulland played bassoon, krumhorn, and flute on the 1977 album L’Habit de Plumes by French folk violinist René Werneer ‎(YS). He then joined French folksters Malicorne for a two-album stint in 1979/80. During the ’80s, his name appeared on titles by Panchito + Hi-Rockers and Billy Squier.

Oberlé helped launch the fortnightly publication Kerrang!, an offshoot of Sounds dedicated to the NWOBHM scene.

Bennett played on “All Quiet On the Western Avenue” by reggae-rocker Johnny G and the 1982 soundtrack album The Draughtsman’s Contract by Michael Nyman.

Baird surfaced in The Jags, a new wave band that issued two 1980/81 albums on Island. In 1985, he drummed on the Celtic folk release The Wellpark Suite by musician Billy Jackson (Contraband, Ossian).

In 2015, Taylor, Gulland, and Oberlé reformed Gryphon, initially with Harvey and Davie. The reunited band self-released the discs ReInvention (2018) and Get Out Of My Father’s Car! (2020).