Greenslade was an English symphonic-rock supergroup comprised of ex-members of Colosseum, Fields, and Web/Samurai. They released four albums on Warner Bros. between 1973 and 1975. Their first two, Greenslade and Bedside Manners Are Extra, feature gatefold cover art by Yes/Uriah Heep/Osibisa illustrator Roger Dean.

Reeves first interacted with Greenslade in The Wes Minster Five, an R&B/beat group that also featured drummer Jon Hiseman. Minster Five issued three 1964 singles on Manhattan and Carnival and backed singer Maynell Wilson. During 1965/66, Reeves played on albums by Sounds Orchestral, Davy Graham, and the Mike Taylor Quartet while Greenslade did stints in The New Jazz Orchestra and Chris Farlowe & The Thunderbirds.

In 1967, Reeves replaced Andy Fraser in John Mayall’s Bluesbreakers, where he reconnected with Hiseman. The pair broke-off with fellow Bluesbreaker, reedist Dick Heckstall-Smith, and formed brass-rockers Colosseum, where they called in Greenslade and guitarist/singer James Litherland for the 1969 albums Those Who Are About to Die Salute You and Valentyne Suite. Upon Farlowe’s entrance, Reeves left to work with John Martyn and Sandy Denny while Greenslade remained for the 1970/71 Colosseum albums Daughter of Time and Live. He then played piano on one track (“Crabs”) on A Story Ended, the 1972 solo album by Heckstall-Smith.

Reeves also worked as a producer, starting with the 1967 Polydor release Take a New Look at The Beatles by the London Jazz Four. Between his time with Colosseum and Greenslade, he produced 1970 albums by the Scandinavian bands Day of Phoenix and Made in Sweden, both on Sonet; and 1971 titles by the UK folk acts Open Road and the Woods Band, both for the Greenwich Gramophone Company.

Lawson was a member of Web, a soul-jazz-psych ensemble whose members hailed from the Bournemouth R&B scene along with future members of King Crimson. Lawson joined for their 1970 third album I Spider and stayed as they morphed into Samurai for a 1971 self-titled album on the Greenwich Gramophone label.

McCulloch played in psych-rockers the Shy Limbs with singer/bassist Greg Lake, an eventual co-founder of King Crimson. After that band’s late 1969 debut album In the Court of the Crimson King, Lake teamed with Nice keyboardist Keith Emerson and Atomic Rooster drummer Carl Palmer in the super-trio Emerson Lake & Palmer. McCulloch, in turn, joined Crimson for their 1970 third album Lizard. He then teamed with ex-Rare Bird keyboardist Graham Field in Fields, which issued a 1971 self-titled album on CBS. 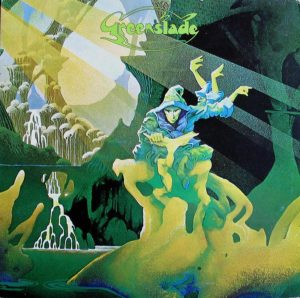 Greenslade released their self-titled debut album in February 1973 on Warner Bros. (UK, US, Oceania, Japan, Spain, Italy, ZA), Philips (France), and Brain/Metronome (Germany). Side one features two songs by Dave Greenslade (“An English Western,” “Drowning Man”) surrounded by two Lawson co-writes (“Feathered Friends,” “Temple Song”). Reeves helped them write “Mélange,” the instrumental that opens side two. Lawson’s organ rocker “What Are You Doin’ to Me” and Greenslade’s epic “Sundance” round out the set. 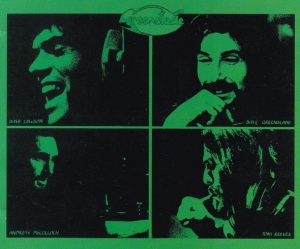 Greenslade sports a gatefold painting by artist Roger Dean, best known for his ongoing work with Yes, Osibisa, and the 1972 Uriah Heep albums Demons and Wizards and The Magician’s Birthday. On Greenslade, Dean introduces the group’s mascot: a hooded, multi-armed goblin, seen here perched on stunted branches in a sea cave with sunlight beaming down on the rugged interior, illuminating various shades of green. The green inner-spread features lyrics, credits, and ID pics of each member.

The Greenslade cover art is the same in each territory with slight color variations on Brain (duller) and Philips (yellower). However, Brain reissued the album in 1976, retitled with new art in accordance with their Gold Rock series (Birth Control, Captain Beefheart, Emergency, If, Scorpions). 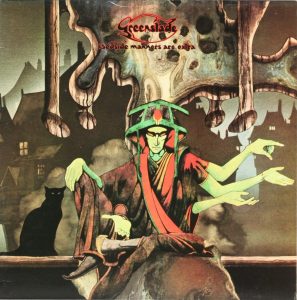 Sessions for the self-produced album took place at Morgan during July 1973 with Boback and Trevor White, an 18-year-old tape operator who later worked on albums by Automatic Fine Tuning, Gentle Giant, Mallard, and Jethro Tull (Songs from the Wood). Bedside Manners is White’s earliest credit.

Dean’s gatefold depicts the mascot perched on a ledge before a dark, foggy townscape with a black cat and fungi overhang. This time, the only colors present are the green skin, headpiece, and red robe of the mascot himself. The inner-spread has lyrics written out in green cursive under tinted performance pics of each member. The photographer, Fin Costello, also notched 1972/73 visual credits on albums by Argent, Nazareth, Tempest, and Trapeze. 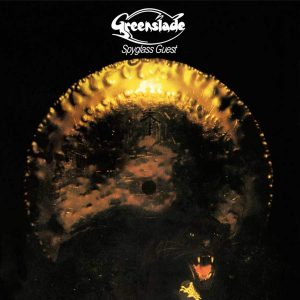 Dave Greenslade composed two numbers, including “Melancholic Race,” the only original recorded exclusively by the whole band. He co-wrote the album’s epic, “Joie De Vivre,” with lyricist Martin Hall, who’d written songs for Colin Scot and Luv Machine. It features violinist Graham Smith, then of String Driven Thing and later Van Der Graaf. At McCulloch’s suggestion, they lifted the album’s title from the line “Spyglass guest at the feast,” though Hall never explained its meaning.

Spyglass Guest concludes with the band’s only cover, “Theme for an Imaginary Western,” written by Jack Bruce and Pete Brown and originally found on Bruce’s 1969 debut solo album Songs for a Tailor. Dave Greenslade recorded the song earlier with Colosseum on Daughter of Time (Hiseman and Heckstall-Smith appear on the original).

Spyglass Guest was co-produced between the band and Jeremy Ensor, the former bassist of Principal Edwards Magic Theatre who added rain sounds to “Rainbow.” Gregg Jackman engineered the album with Morgan newbie Lindsay Kidd, a tech hand on For Girls Who Grow Plump In the Night by Caravan.

Despite the use of Dean’s logo, Spyglass Guest sports cover art by Keith MacMillan (aka Keef), the artist responsible for the album visuals of numerous acts on Vertigo (Affinity, Beggars Opera, Nirvana, Warhorse) and RCA/Neon (Fresh Maggots, Raw Material, Spring, Tonton Macoute). The cover shows a gong in the dark behind a black panther. The back displays three pics: Greenslade and McCulloch playing chess; Lawson writing at a desk; Reeves tending to a horse. The inner-spread features lyrics and studio pics. Their mascot is absent. 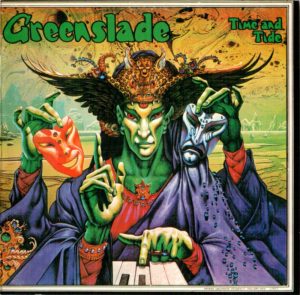 Dave Greenslade composed and lone-performed the titular sequence on harpsichord (“Time”) and Mellotron (“Tide”), helped only by the Treverva Male Voice Choir. Likewise, Lawson lone-performed his instrumental “Doldrums” on Fender Rhodes piano, harpsichord, and ARP (Solina String Ensemble), replete with gull effects. He recorded his other number, “Animal Farm,” as a trio piece, utilizing the Briley/McCulloch rhythm section without Greenslade.

Time and Tide was produced between the band, Ensor, and Gregg Jackman, who engineered the album with Kidd. Jackman also worked on albums that year by A Band Called “O”, Chris Squire (Fish Out of Water), and ex-Third World War frontman Terry Stamp.

The Greenslade mascot, as seen on Greenlade and Bedside Manners Are Extra, makes his reappearance on the Time and Tide cover, painted by Patrick Woodroffe. Here, the mascot (rendered with greater facial detail) sports a winged, leopard-print, multi-faced hybrid headpiece and a purple satin robe. He holds up comedy/tragedy masks while playing keyboard. Behind the member pics on the gatefold backside, Woodroffe renders further details of the mascot’s setting: a domed, yellowy arctic realm populated with gulls. The now-circleless nameplate is green and outlined with thicker bowls and softer edges.

The inner-spread features lyrics and a photo of Greenslade’s stage setup, which has a blowup of the Bedside mascot behind the Spyglass gong of McCulloch’s double-bass kit. The mascot also appears on a nearby keyboard.

Woodroffe — who also did album art for Budgie, Pallas, Ross, Strawbs, and Judas Priest (Sad Wings of Destiny) — would later do the elaborate booklet illustrations and text to The Pentateuch of the Cosmogony, his 1979 collaborative project with Dave Greenslade.

Greenslade disbanded in early 1976 over a dispute with their ill-equipped management company, which demanded a fortune in exchange for contract annulment.

Dave Greenslade made the 1976 concept album Cactus Choir, recorded with Reeves, drummer Simon Phillips, and ex-Rare Bird singer Steve Gould. It was co-produced by Greenslade, Jackman, and Rupert Hine and released on Warner Bros. with a Roger Dean cover that features the Greenslade mascot. Also that year, Greenslade appeared along with four other keyboardists (including Wlodek Gulgowski) on Electrocuted, the debut solo album by Swedish jazz-rock guitarist Lasse Wellander.

Greenslade and Reeves reassembled the band in 1977 for a string of live engagements. This iteration featured Hiseman, then doubling in Colosseum II; and singer/guitarist Mick Rogers, fresh off a six-album run with Manfred Mann’s Earth Band (and soon to form his own supergroup, Aviator, with alumni of Blodwyn Pig and Quantum Jump).

In 1979, Dave Greenslade wrote and performed the four sides of electronic instrumental music that comprise The Pentateuch of the Cosmogony, his collaborative project with writer and illustrator Patrick Woodroffe.

Tony Reeves played on 1975 albums by Chris De Burgh and (with McCulloch) the folk duo Lanzon & Husband. He joined Curved Air as bassist and keyboardist for their 1976 swan song Airborne, which contains the Reeves/Sonja Kristina co-write “Broken Lady.”

Dave Lawson played on 1976 albums by Stackridge and Tony Hazzard. He also backed composer Spike Milligan and the London Symphony Orchestra on a classical adaptation of the 1940 novella The Snow Goose by American author Paul Gallico, who died in 1976. (The prior year, Camel used that novella as the basis for an instrumental concept album, which prompted a lawsuit.)

During the late ’70s, Lawson did stints behind Roy Harper and Chris Rainbow. He then became an in-demand sessionist with credits on albums by Johnny Warman, Sally Oldfield (Water Bearer), Kate Bush (The Dreaming), Jon Anderson (Animation), and Yes (90125). In 1981, he backed Chris Squire and Alan White on their Atlantic single “Run With the Fox,” cut just after their aborted union with Jimmy Page in XYZ (ex–Yes and Led Zeppelin). As “Broken Fingers,” he played on the album Ivory by Nigerian soul-funk singer Kio Amachree.

Martin Briley played on the 1975 EMI release Back On My Feet Again by ex-Gracious frontman Sandy Davis. Over the ensuing 10-year period, he played on albums by Bonnie Tyler, Ellen Foley, Ian Hunter, and Julian Lennon. As a solo artist, Briley signed to Mercury for the 1981 release Fear of the Unknown, followed by two further albums and the 1983 hit “Salt In My Tears.” His songs have been recorded by Brock Walsh, Kenny Loggins, Pat Benetar, Night Ranger, and Kiwi rockers Dragon, among others.

In 2000, Dave Greenslade and Reeves reactivated Greenslade for the Mystic Records disc Large Afternoon. The mascot appears in his Bedside likeness, this time in an earthly setting of green grass and trees.