Gracious was an English symphonic/art-rock band that released a self-titled album on Vertigo in 1970, followed by This is…Gracious!! on Phillips in 1971. Each album contained one multi-movement sidelong suite and four short-to-medium-length songs and instrumentals. The band had already split by the time their second album hit the shelves. Drummer Tim Wheatley later surfaced in rustic-rockers Taggett.

In 1965, students Alan Cowderoy (guitar) and Paul ‘Sandy’ Davis (drums, vocals) assembled the beat group Satan’s Disciples — quickly shortened to The Disciples — which performed covers of the day’s pop hits for fellow Esther pupils. Other members passed through the lineup as the band outgrew the school circuit and progressed into blues and psych-rock. By 1968, the band included keyboardist Martin Kitcat, bassist Rick Laird, and drummer Robert Lipson, whose presence allowed Davis to concentrate on vocals. They changed their name to Gracious at the insistence of manager David Booth.

In 1968, Gracious toured with The Who and drew the interest of producer Norrie Paramor (Cliff Richard & The Shadows), who arranged a recording session with Tim Rice at the helm. The band recorded some early Davis/Kitcat originals, including a suite based on the four seasons. However, the only release to show for this liaison is the Polydor single “Beautiful” (b/w “Oh What a Lovely Rain”). When Laird left the band in 1969, roadie Tim Wheatley assumed the bass slot. 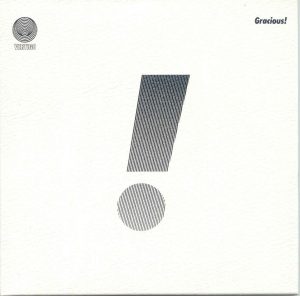 The slanted exclamation mark that graces the cover was affixed to the Gracious nameplate. The image is credited to Teenburger Designs (Cressida, Brinsley Schwarz, Red Dirt, Quintessence), the novice firm of Barney Bubbles. The inner-fold depicts a giant pink stripper crawling through marble walls.

Spirits soured in the Gracious camp when Vertigo rejected their second album. This is…Gracious!! was ultimately released on Philips in 1971 after the group disbanded. Side one features the four-part suite “Super Nova.” The original vinyl contained three songs in the five-to-seven-minute range on side two, including “Blue Skies and Alibis” and “Hold Me Down.” Painter/illustrator Roger Dean (Yes, Uriah Heep, Osibisa, Greenslade, Gentle Giant, Magna Carta) designed the cover, which features a stained-glass window variation of the exclamation mark.

CD issues of This is…Gracious!! add a missing middle section (1c) to the suite, bringing its playing time to 24:58. Another missing track, “Once In a Windy Day,” — omitted from vinyl due to time constraints — has also been added to the running order.

Davis issued two solo singles on United Artists in 1972, followed by a pair of 1973–75 albums on EMI. Kitcat appeared alongside members of Brand X on the 1975 Warner Bros. release The Eddie Howell Gramophone Record by singer/songwriter Eddie Howell. Wheatley surfaced in the Hollies-spinoff Taggett, which issued a self-titled album on U.A. in 1973.

Cowderoy later did the compiling work on best-of releases by Kraftwerk, Todd Rundgren, and The Sensational Alex Harvey Band. In 1977, Cowderoy assembled the Vertigo compilation New Wave, which features tracks by The Boomtown Rats, The Damned, Skyhooks, Talking Heads, and Richard Hell & The Voidoids.

Four songs from the 1968 Gracious sessions were unearthed on the 1994 Renaissance Records compilation Buried Treasures, which also includes cuts by Touch and Stray Dog. In 1996, Wheatley and Lipson resurrected Gracious for the CD Echoes on Centaur Discs.

Locomotive
Locomotive was an English brass-rock/psych band that was active with multiple lineups between 1966 a...
Godot
Godot were an English coldwave/synthpop combo from Liverpool that self-released a four-song EP in...
Woody Woodmansey’s U-boat
Woody Woodmansey’s U-boat were an English pop-rock band that released the album U-Boat on Bronze ...
Rodriguez
Rodriguez — aka Sixto Diaz Rodriguez (born July 10, 1942) — is an American singer/songwriter from ...
Paul Young
Paul Young (born Jan. 17, 1956) is an English soul-pop singer from Luton, Bedfordshire, who first ...
The Emotions
The Emotions were an American soul group from Chicago, formed in 1965 and initially a singles act ...
The Cortinas
The Cortinas were an English punk-rock band from Bristol that released two singles on Miles Copel...
The Three Degrees
The Three Degrees were an American soul group from Philadelphia, formed in 1963. After a string of...
Home
Home was an English rustic art-rock band from London, best remembered for the 1972 epic "Lady of t...
Love Unlimited
Love Unlimited was an American soul trio from Los Angeles comprised of sisters Glodean and Linda J...
Cymande
Cymande were a multi-national funk-psych band assembled in London, England, by Guyanese musicians ...
Elias Hulk
Elias Hulk was an English hard-rock-psych band from Bournemouth, Dorset, that released the album U...