Goliath was an English jazz-rock/soul band from Manchester that released a self-titled album on CBS in 1970. 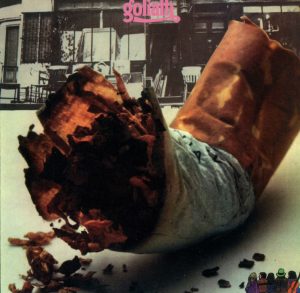 Goliath was released in 1970 on CBS (UK/Aus.) Eight of the nine songs are originals, including “Men”, “Prism,” “No More Trash,” and “Festival of Light.” Side one climaxes with the 10-minute “Hunters Song.” The frenetic opener, “Port and Lemon Lady,” was issued on 7″ (b/w “I Heard About a Friend“). The album’s one cover, “Maajun (A Taste of Tangier),” was written by folk artist Davy Graham.

Musically, the songs are characterized by staccato fretboard runs, angular rhythmic patterns, and the frontal presence of Rosbotham’s spicy woodwinds and Rothwell’s husky vocals. Though it would be their only album, Goliath’s signature style was subsequently echoed in the bands Catapilla and Fusion Orchestra.

Williamson resurfaced in Titanic for their 1975 fourth album Ballad of a Rock ‘N Roll Loser. In the 1990s, he cut two albums with blues-rockers The Skeleton Crew (not to be confused with Fred Frith‘s 1980s-era duo with Tom Cora). Rothwell cut a pair of 1972/73 singles on the Chapter 1 label.

Goliath was first reissued in 2004 by Spanish pirates Estrella Rockera. In 2012, the title was officially reissued by UK archivists Aurora (CD) and Sweet Dandelion (vinyl).

Lyn Collins
Lyn Collins (June 12, 1948 — March 13, 2005) was an American soul singer from Lexington, Tex. D...
Hampton Grease Band
Hampton Grease Band were an American jam-rock band from Atlanta that released the double-album Mus...
The Legendary Pink Dots
The Legendary Pink Dots were an English-Dutch goth-psych band that issued two cassette-albums on s...
The Transmitters
The Transmitters were an English post-punk band that released two singles and the album 24 Hours on ...
The Guess Who
The Guess Who is a Canadian rock band from Winnipeg, Manitoba, formed in 1965. The band achieved h...
Fludd
Fludd were a Canadian pop-rock band from Toronto that released a self-titled album on Warner Bros...
Pentangle
Pentangle was an English folk-rock band from London that released six albums on Transatlantic/Repr...
Heavy Metal Kids
The Heavy Metal Kids were an English hard-rock/pop band from London that released a self-titled al...
The Pretenders
The Pretenders are an English New Wave/rock band, formed in London in 1978 by American-expat Chris...
Melba Moore
Melba Moore (born Oct. 29, 1945) is an American R&B singer and actress who got her start in show...
The Spencer Davis Group
The Spencer Davis Group was an English R&B/beat band from Birmingham, fronted by teenage singer/...
Al Stewart
Al Stewart is a Scottish singer/songwriter who emerged from the British folk boom of the mid-1960s. ...