Ginhouse was an English rock trio from Newcastle upon Tyne that released a self-titled album on B & C and Philips in 1971. Along with contemporary titles by T2, Fuzzy Duck, Leaf Hound, Quatermass, and High Tide, the album has since become a collectible artifact of progressive hard rock.

They formed from the ashes of Household, a Newcastle club band with bassist Stewart Burlison and drummer David Whitaker. Guitarist Geoff Sharkey played in another Tyneside act, the Lusika State Group, when approached by the pair.

Sharkey took up guitar at age 10, inspired by Elvis Presley, The Shadows, and skiffle music. At age 12, he played in a local beat group, The Hipsters, who appeared on a TV segment with rising star Marianne Faithfull. After a sequence of bands (The Antics, The Heard), he found a steady Tyneside gig in the Lusika State Group, which included future members of Geordie. By age 16, he adopted the jazz chords and scales of Wes Montgomery and Kenny Burrell.

Burlison and Whitaker approached Sharkey at Newcastle’s Quay Club, a regular haunt for local musicians. They jammed to covers of Cream, Jimi Hendrix, and BB King. In reference to their penchant for blues and jazz, they named their band Ginhouse after the Fletcher Henderson standard “Gin House Blues,” originally popularized in the 1920s by Bessie Smith and recently cut by The Animals, Cuby + Blizzards, and Amen Corner.

Ginhouse gigged the Tyneside circuit as an opening act for Deep Purple, Jethro Tull, Free, Thin Lizzy, Black Sabbath, and the Aynsley Dunbar Retaliation. They rehearsed the Peter Green composition “Albatross” for an opening slot at The Mayfair, unaware that the slated headliner was the song’s originators, Fleetwood Mac. Further gigs included support slots for The Who (at Redcar Jazz Club) and two with up-and-comers Yes (at Maidstone College and Argus Butterfly in Peterlee) just after Steve Howe joined the band.

In 1970, Ginhouse won the Melody Maker Battle of the Band competition, an event sponsored by Newcastle University and held at London’s Lyceum Theatre with an appearance by David Bowie, who did an unaccompanied rendition of his recent hit “Space Oddity.” They passed on their prize deal with Decca for a recording offer by Air London. However, an offer came from B & C Records, a label linked to Charisma with a like-minded stable of acts (Atomic Rooster, Delivery, Hannibal, Steamhammer). 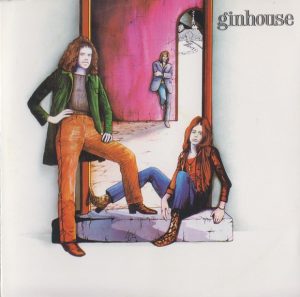 Ginhouse released their self-titled album in 1971 on B & C (UK) and Philips (Germany). It features nine Sharkey originals, including “Life,” “I Cannot Understand,” “The Journey,” “The House,” and “Sun in a Bottle.” The opening track, “Tyne God,” concerns the River God Tyne, a bronze statue mounted on the outer wall of Newcastle Civic Centre. Side two begins with a cover of the 1964 Beatles ballad “And I Love Her,” rearranged here as a melodramatic, tempo-fluctuating hard rock number.

Ginhouse was recorded at Abbey Road Studios with Swedish producer Anders Henriksson (Life, Quatermass, Baltik, Ablution), who added keyboards on select passages. Original copies are housed in a gatefold sleeve by designer Dave Field and sleeve artist Ian Latimer (Argent, Alan Bown, UFO, Barclay James Harvest). The cover illustration is based on a photo of the band at a derelict house by the Thames.

Management and money issues plagued Ginhouse, which returned to Newcastle and folded when Sharkey got an offer from drummer Mick Underwood (recently of Quatermass) to be in a new band with Paul Rodgers, then of a temporarily disbanded Free. Sharkey knew Underwood from his time in London, where he’d augmented Quatermass on select live dates. Their new band, Sammy, featured reedist Keith Gemmell (Audience, Stackridge) and keyboardist Mick Hodgkinson (Silverhead), but not Rodgers, who was now back in Free. Their lone album, Sammy, appeared in 1972 on Philips.

In the late 1980s, Whitaker resurfaced in partnership with musician Adrian Burch on a string of instrumental stage and screen recordings for De Wolfe Music.