Gas Mask was an American brass-rock band from N.Y.C. that released one album, Their First Album, on Tonsil Records in 1970.

Rava first recorded a decade earlier with titles on the Italian Cetra label. During the mid-1960s, he played on albums by Piero Umiliani and Steve Lacy. He also did a stint in Gato Barbieri‘s Italian quintet. After his appearance on the 1969 FMP release European Echoes by German trumpeter Manfred Schoof, Rava moved to Manhattan, where he caught wind of the burgeoning fusion of jazz and rock.

Osborne hailed from The Del-Aires, a surf-rock band from Paterson, NJ, that released four singles between 1961 and 1964 and appeared in the B-movie The Horror of Party Beach.

Grando played on 1969 albums by Earth Opera (The Great American Eagle Tragedy), Tom Paxton, and Steve Elliot. Just as Gas Mask got underway, he played on the 1970 Elektra release The American Revolution by David Peel & The Lower East Side.

Davidson played on the 1969 folk-rock album The Mother of Us All by the Steve Baron Quartet. 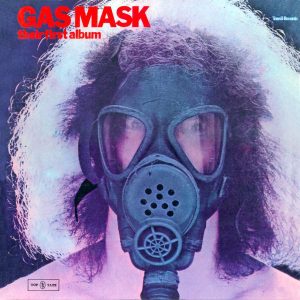 Gas Mask signed to the short-lived NY label Tonsil Records and released their singular album, ironically titled Their First Album, in 1970. It features 10 songs: two by Gross (“The Immigrant,” “The I Ching Thing”) and eight by Oliva, including “If You Just Think of Me,” “Just Like That,” “Thank You My Dear,” and “Watch Myself Grow Tall.”

“If You Just Think of Me” rides on a shaky groove in Gm/Cm with percolating bass, rippling organ, and a darting sax riff. Osborne’s gruff, soulful vocals command the staccato, angular refrain and major-seventh chorus.

A subdued bass in B heralds “Just Like That,” where emotive, stretched-vowel vocals soar amid cascading organ keys and trumpet overlays. Midway, sax/trumpet tradeoffs are undercut with loose tom rolls.

The band cuts loose on the two instrumentals. “The Immigrant” features a persistent bassline in E against an ascending brass/organ riff (C-D-E). It soon cuts to a mute trumpet solo.

“The I Ching Thing” begins with dark, faint, distant billowing sounds. One minute in, a shaky pattern in Cm/F forms with flute, muted trumpet, and chordal strikes. Things loosen in the middle with perforating flute, scaling bass, and roaming drums.

Their First Album was produced by Teo Macero, best known for his production work on jazz classics by Miles Davis (Kind of Blue, Sketches of Spain, Miles In the Sky), Charles Mingus (Mingus Ah Um), and Thelonious Monk (Criss-Cross). Original copies are housed in a gatefold sleeve with a lyric/photo inner-spread. The label bears Tonsil’s distinct open-mouth trademark against a red background.

The Gask Mask album was one of three released on Tonsil, which otherwise only handled the acts Canada Goose, Great Jones, and a field recording by actor Robert Redford (The Language and Music of the Wolves), plus a single by Joey Dee and the New Starliters. In France, the album was released on Musidisc as Pop No End and credited just to Bobby Osborne with generic, psychedelic gogo girl cover art.

Rava played on the 1971 experimental big band release Escalator Over the Hill by Carla Bley and Paul Haines. He then launched his career as a bandleader, starting with the 1972 Fonit Cetra International release Il Giro Del Giorno In 80 Mondi.

Grando played on a string of 1971–73 folk and country albums, including titles by David Bromberg, The Quinaimes Band, and Cat Mother. In 1974, he served as a touring musician on David Bowie‘s Diamond Dogs tour, as documented on David Live.

Strassburg partook in the soul-funk octet Gotham, which issued the 1972 album Pass the Butter. As Jimmy Strassburg, he played on High On You, the 1975 debut solo album by Sly Stone. He then played on the 1977 albums Home In the Country by (ex-Gotham saxophonist) Pee Wee Ellis and Light’n Up, Please! by David Liebman. In 1983, he played on the jazz-pop album So Nobody Else Can Hear by Jimmy Cobb with Freddie Hubbard and Gregory Hines.

Brooks played on the 1973 release This Is Marva Josie, recorded with Earl “Fatha” Hines and His Orchestra. Gross resurfaced in the mid-1980s on a pair of Gramavision titles by jazz drummer Bob Moses.

Jimmy Smith
Jimmy Smith — aka James Oscar Smith (Dec. 8, 1928 — Feb. 8, 2005) — was an American soul-jazz/fun...
The Savage Rose
The Savage Rose are a Danish art-rock/psych band from København, formed in 1967. The band's initia...
Roy Porter
Roy Porter (July 30, 1923 — Jan. 24, 1998) is an American jazz-funk drummer from Walsenburg, Colo...
Pearls Before Swine
Pearls Before Swine was an American folk-psych band from Melbourne, Fla., that released the 1967/68 ...
Robben Ford
Robben Ford (born Dec. 16, 1951) is an American jazz and blues guitarist from Woodlake, Calif. D...
Skylark
Skylark were a Canadian soul-pop band from Vancouver that released two albums on Capitol between ...
Bette Midler
Bette Midler (born Dec. 1, 1945) is an American singer and actress from Honolulu who rose to promi...
Centipede
Centipede was an English avant-garde jazz big-band led by pianist Keith Tippett for the 1971 RCA/Neo...
Anthony Phillips
Anthony Phillips (born Dec. 23, 1951) is an English multi-instrumentalist and composer with a career...
The Electric Flag
The Electric Flag was an American brass-rock band that debuted with a soundtrack recording for th...
Harry Nilsson
Harry Nilsson (June 15, 1941 — Jan. 15, 1994) was an American singer/songwriter from Brooklyn. ...
Cockney Rebel
Cockney Rebel was an English orchestral/art-pop band that released two albums on EMI in 1973 and 1...