Gandalf were an American psych-rock band from NYC that recorded a self-titled album in 1967 for Capitol, which belatedly issued the album in 1969. The band originally recorded as The Rahgoos and alternately cut a single for RCA as The Barracuda. 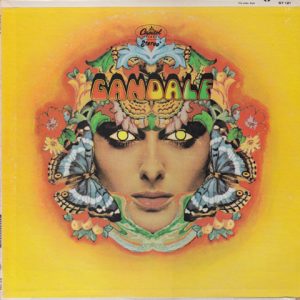 The self-titled Gandalf album consists of 10 songs, of which two (“Can You Travel In the Dark Alone” and “I Watch the Moon”) are band originals written by guitarist/singer Peter Sando. The remaining eight tracks include three compositions by singer/songwriter Tim Hardin (“Hang On to a Dream,” “Never Too Far,” and “You Upset the Grace of Living”), two by the songwriting team of Alan Gordon and Garry Bonner (“Tiffany Rings” and “Me About You”), one by the team of Evelyn Danzig and Jack Segal (“Scarlet Ribbons”), plus the Eden Ahbez standard “Nature Boy.”

A haunted Zombies-style mood pervades several key covers. The tender Blunstone-like vocals that overlay “Never Too Far” are lifted by a chorus marked with swelling organ and searing fuzz-tone leads. Twinkly Vox arpeggios and shivery hi-hat accent the lucid vocals on “Hang On To a Dream,” where somberness pervades through a music-hall chorus. Two minutes later, echoey vibes and glistening harpsichord enswirl the nursery melody of “Scarlet Ribbons.”

The band is most audacious on the originals. On “Can You Travel In the Dark Alone,” sitar opens out to harmony-laden verses flanked with vibraphone interjections and a recurrent, waving bass drone. Later, the booming sustains and scaling ascents that herald “I Watch the Moon” yield to poignant verses. Gradually, organ engulfs the track with jet engine sounds and churning precision.

Like Forever Amber, Gandalf were in a rare class of bands to evoke The Zombies, in particular the ominous melancholy of Odessey and Oracle.

Between the recording and release date of the Gandalf album, Sando sang on the Gordon & Bonner compositions “The Dance at St. Francis” and “Lady Fingers,” which comprised a 1968 RCA single credited to The Barracuda.

A collection of Gandalf outtakes, mostly from 1968, were issued on the 2007 CD Gandalf 2 by archivists Sundazed.