Along with Colosseum, Heaven, Brainchild, the Greatest Show on Earth, and the Keef Hartley Band, Galliard represented a UK wing of the brass-laden jazz-rock-soul sound, reflecting stateside contemporaries Blood Sweat & Tears, Chicago, the Sons of Champlin, and Ten Wheel Drive.

The pair first linked in the Winson Green combo The Castaways, a Shadows-inspired instrumental rock act that morphed into the R&B/beat group The King Bees. That band morphed into Craig, which issued two 1966 Fontana singles, including the psych-stormer “I Must Be Mad” with lightning drumrolls by a young Carl Palmer, who later found fame in The Crazy World of Arthur Brown, Atomic Rooster, ELP, and Asia.

After Craig folded, Brown and Pannell played in an Irish showband, which included bassist Andy Abbot, saxophonist John Smith, and trumpeter Dave Caswell. With a repertoire of Stax/Volt covers, they formed Immediate Pleasure and stabilized as a sextet with drummer Les Podraza, one of several English drummers (including John Bonham and Aynsley Dunbar) to have backed London-based American folkie Tim Rose.

As the band gigged and Brown composed a setlist of originals, two foreign influences informed their aesthetic: the burgeoning stateside brass-rock sound of Blood Sweat & Tears and Chicago Transit Authority; and the obscure, eclectic chamber-psych of Ars Nova. The latter group’s synthesis of Renaissance-like folk with brass arrangements inspired Brown to rename his band Galliard, the name of a 16th century folk dance. 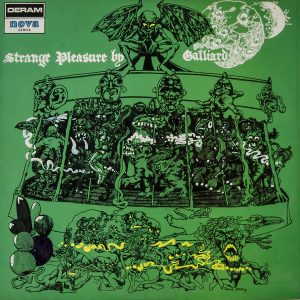 Galliard signed to Decca-subsidiary Deram and released their debut album, Strange Pleasure, in November 1969. It was the fourth album released in Deram’s Nova Series, right behind the debuts of Ashkan, Bulldog Breed, and Clark-Hutchinson. The album features eight Brown originals, including “Blood,” “Skillet,” “Children of the Sun,” and “I Wrapped Her In Ribbons,” the last of those paired on 7″ with the non-album “Hermit and the Knight.” Caswell contributed “Pastorale” and “Got to Make It.”

“Skillet” activates with a scratchy one-chord riff, anchored with scaling bass, flanked with striking brass, and bookended by a swelling ensemblic blast. “I Wanna Be Back Home” is a becalmed, harmony-laden folk tune with a tight, stately chorus, underlaid with backward cymbals. “Pastorale” cuts between brisk, galloping verses and subdued soliloquies, enveloped with a blasting intro/outro. “I Wrapped Her in Ribbons,” ostensibly a folk-pop/harmony tune, cuts to a jerky jazz middle in 6/8.

“Children of the Sun” moves from suspenseful verses to exploding choruses with ringing guitar lines, throbbing bass, and pounding drums for a melodramatic feel. On the equally intense “Got to Make It,” bobbing bass anchors the stop/start onslaught of cutting riffs, brass shots, and snare spray. The medieval-spirited “Frog Galliard” echoes the folk/brass arrangements of Ars Nova (and fellow Brummies The Move on their 1970 release Shazam, which features a cover of the Ars Nova track “Fields of People”).

“Blood” starts with a staccato guitar figure over an ominous, low bassline and martial drum pattern. After a sequence of tense verses and light refrains, a battle sequence unfolds, followed by a reflective passage that returns the song to form. “Hear the Colours” centers on a sparse, lyrical arrangement of remote bass and tambourine, cutting once to a syncopated jazz break, marked with soprano sax. “I Wanna Be Back Home” is a blues in F with thick, gutteral, low-end bass and harmonica, breaking twice for a piledriving brass burst.

Shortly into the new year, Smith cleared way for saxophonist Lyle Jenkins. In February 1970, Galliard commenced sessions for their second album with Wainman at Abbey Road Studio 2, where they laid a cut by Caswell (“Premonition“) and two by Brown (“New Dawn Breaking,” “In Your Minds Eye”) in the span of a month. Immediately afterwards, Caswell and Jenkins jumped ship to the Keef Hartley Band (and later Ashton, Gardner & Dyke).

Brown called in his pianist/arranger friend John Morton; the two co-composed “Open Up Your Mind” and “Somethings Going On.” To fill out the sound, they hired trombonist John Hughes, trumpeter Harry Beckett, and reedist Tony Roberts. 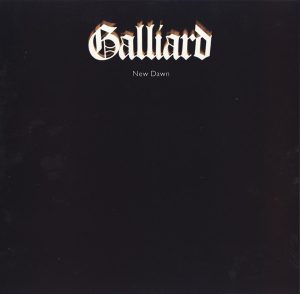 The resulting New Dawn appeared late in 1970 with the five aforementioned cuts plus three additional Brown originals: “Winter-Spring-Summer,” “And Smile Again,” and the nine-minute, sitar-laden “Ask for Nothing.” Anstey’s cover art places the Galliard nameplate in white Blackletter typface against a black background.

“In Your Mind’s Eyes” emerges like smoke from the dark; a tribal blast heralds a martial set of verses, followed by a swinging, radio-sung bridge and blaring, minor-key instrumental section. “And Smile Again” is folksy and plaintive; Brown, affecting an Ian Anderson-like tone, wraps vocal melodies around the accordion-laden, acoustic-plucked arrangement. The through-composed “Winter-Spring-Summer” shifts through a quiet flute theme, a harmonized singalong section, a bass-booming fanfare, and a trumpet-fluttering jazz sequence, which gradually accelerates toward the climax.

Galliard gigged constantly over the next year but soon shrunk to the quartet of Brown, Pannell, Abbott, and a sequence of drummers. Notable shows included the June 1970 Swedish Festival of The Midnight Sun and a November 1971 showcase for Zairean President Mobutu Sese Seko. In 1972, Wainman produced two Brown originals by the latter-day band, “I Belong to Yesterday” (b/w “Lonely Tonight”), released as Helicopter on small-press Maple Annie.

By this point, Brown embraced synthesizers and the newer funk sounds coming from the US. He formed the Brit-funk act Muscles, which issued multiple singles and a self-titled album during the mid-1970s. Pannell became the sound engineer for the Electric Light Orchestra. Since 2003, the two Galliard albums have been reissued multiple times by archivists Sunrise, Tapestry, and Esoteric.