Fusion Orchestra was an English symphonic/art-rock-soul band that released the album Skeleton in Armour in 1973 on EMI.

They sprung from a musical partnership between guitarists Colin Dawson and Stan Land, friends from childhood who formed a band in 1969 with drummer Dave Bell. To reflect their musical eclecticism, they chose the name Fusion Orchestra. Their first serious bassist was Mick Sluman, who they poached from one of their earliest opening acts, This Was (named after the first Jethro Tull album). Sluman pitched in on some of the earliest Dawson/Land originals, such as “Winter Nights” and “Outcast in Hell.”

In late 1970, they placed an ad in the Melody Maker for a serious singer. That October, Jill Saward (then 16) won the slot. She was a self-taught vocalist and flutist with classical keyboard training. Her earliest contributions to the band included co-writes on the live numbers “Desolation Railway Station” and “Greasy Jean, the Funfair Queen.”

In 1971, Fusion Orchestra signed with Mother Records, but a year transpired with no studio time. The contract was annulled and Sluman cleared out for bassist and harmonica player Dave Cowell. The lineup of Dawson, Land, Bell, Saward, and Cowell made its live debut in June 1972. For the three eldest members, it was their 175th performance.

Fusion Orchestra introduced more elaborate numbers into its repertoire, including “Sonata in Z,” “Have I Left the Gas On?” and “Talk to the Man In the Sky.” In concert, they utilized grand lighting and costume, including Saward’s lacy gowns and Cowell’s flag capes. Each member had a solo spotlight, among them Saward’s unaccompanied acoustic 12-string showpiece “Queen of Sheba.” Audience members started mimicking the band’s style of dress. After a high-profile showcase at London’s Marquee club in February 1973, the band signed with EMI. 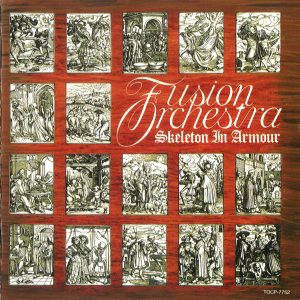 Fusion Orchestra released Skeleton in Armour in November 1973 on EMI. It features their three epic showpieces, “Sonata in Z” (11:45), “Have I Left the Gas On?” (8:37), and “Talk to the Man In the Sky” (11:54), all co-composed by Cowell, Dawson, and Saward. They developed the title-track (5:12) as sessions advanced; it features Saward on Hammond organ. At EMI’s insistence, she and Dawson co-wrote “When My Mamma’s Not at Home” (3:24) for intended single release. The album is bookended by the prelude/postlude “Fanfairy Suite for 1000 Trampits” (Part One and Two). Side B features two off-the-cuff miniatures, “OK Boys, Now’s Our Big Chance” and “Don’t Be Silly, Jilly.”

Original copies of Skeleton in Armour come in a gatefold sleeve that features 37 panels (32 medieval sketches, plus the five members) over a wooden background. It was conceived by Cowell and designed by Bell with the album title in Blackletter font. The inner-spread shows a sepia-tinged photo of the band in performance, overlaid with lyrics and credits (lettering by Dawson).

“When My Mamma’s Not at Home” was issued on 7″, backed with the non-album Cowell/Land “Nuthouse Rock”. The a-side features brass arranged by Andrew Pryce Jackman, a one-time member of psych-rockers The Syn, a precursor to Yes.

In December 1973, Cowell quit Fusion Orchestra after a show at Bristol’s Colston Hall. They debuted his replacement, bassist Paul Jennings, at a February 1974 performance at Doncaster College of Education, where they premiered three new numbers: “Beginning End,” “To a Child,” and the drum solo showcase “Lazoon.” For two months, the band included keyboardist Martin Slavinec as a sixth member.

Due to the 1973/74 fuel crisis and its impact on vinyl stock, EMI dropped some of its lesser-known acts, including Fusion Orchestra. In mid-1974, co-founder Land quit the band after more than 400 gigs. Andy Blamire, a longtime roadie, stepped in as their second guitarist.

Dawson, Saward, and Jennings collaborated on several new songs, including “Sister Reno” and “Make It Easy.” However, Dawson felt the band had undergone too many changes and quit in late 1974. His last show with the band took place on December 22 at the Marquee Club.

The remaining band (Seward, Jennings, Blamire, Bell) soldiered on for five more months with guitarist Alan Murphy, a one-time sideman of Long John Baldry. Their last performance occurred on May 4, 1975 at Barbarella’s in Birmingham.

Land, Bell, Sluman, and Dawson regrouped for a time in the unrecorded rock band Rampant Robot. Bell drummed for some years in Basil’s Balls-Up Band, which issued an undated single on a namesake self-press.

Saward cut singles under multiple names (Carol Kay, Connie Laverne, Dee Dee Martin, Desiderata, Diana Dee, Diana Foster, etc). As Ruth Swann, she did one of the earliest covers of “Tainted Love” — originally a 1964 b-side by American soulster Gloria Jones and later popularized by Soft Cell — for a 1975 single on Spark. She then assumed the name Brandy for the 1977 Polydor single “Ooh Ya.” In 1979, she cut an album with the five-woman disco act Citizen Gang. After cutting an album of disco cover medleys with the Europop harmony fourseome Enigma, she joined the jazz-funk combo Shakatak for a lengthy run.

Dawson returned in the late 2000s with Fusion Orchestra 2, which briefly included Cowell. In 2013, the band released Casting Shadows on Patchwork Studios (UK).

In 2018, UK archivists Secret Records Limited released Live at the Marquee 1974, a 62-minute document of Fusion Orchestra’s 12/22/74 show, their last with Dawson. It features the post-album numbers “Sister Reno,” “To a Child,” “Set in Rock,” “Beginning End” (11:10), and the drum solo showcase “Spinedance” (10:00). Also included are live renditions of the old favorites “Talk to the Man in the Sky” and “Skeleton in Armour,” plus covers of “Whole Lotta Shakin'” and The Beatles classic “Ticket to Ride.”

Crystal Circus
Crystal Circus were an American psych-rock band from Los Angeles that test-ran the album In Relati...
Red Summer
Red Summer were an English instrumental art-rock combo that issued the album Release on Rimshot Re...
Soft Cell
Soft Cell was an English electro/art-pop duo from Leeds that released three proper albums and asso...
Orang-Utan
Orang-Utan were an English hard-rock/psych band from London that released a self-titled album on B...
Charlee
Charlee were a Canadian blues-rock/psych band from Montréal that released a self-titled album on R...