Fun Boy Three were an English New Wave/pop-reggae trio from Coventry that released two albums on Chrysalis between 1982 and 1983. The three had previously recorded two albums as part of the two-tone/ska septet The Specials. On their first two singles, the three were joined by the up-and-coming girl group Bananarama.

Fun Boy Three commenced in July 1981 when singer Terry Hall, singer/percussionist Neville Staple, and singer/guitarist Lynval Golding left The Specials. During a performance on Top of the Pops to promote “Ghost Town” (U.K. #1), Hall announced the decision before a stunned Jerry Dammers, whose policies for the band didn’t sit well with the three. In their new configuration, the trio pursued a darker sound with minimal arrangements, low/echoey vocals, and an emphasis on jungle-style percussion.

Fun Boy Three debuted in late 1981 with the sardonically deadpan “The Lunatics (Have Taken Over the Asylum)” (b/w “Faith, Hope And Charity“), a U.K. #20 hit. For their next single, the three collaborated with Bananarama on the ’30-era standard “It Ain’t What You Do (It’s the Way That You Do It)” (b/w “The Funrama Theme”), released in January 1982 (U.K. #4). Hall contacted the trio after seeing a feature on them in an issue of The Face. To return the favor, FBT backed Bananarama on their second single “Really Saying Something” (U.K. #5), originally recorded in 1964 by minor Motown group The Velvelettes. All three a-sides have videos that were generously rotated on the fledgling U.S. cable network MTV. 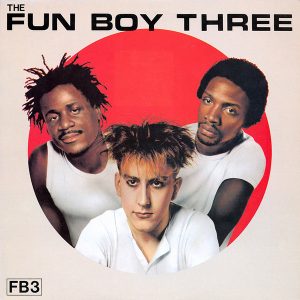 Their first album, The Fun Boy Three, was released in March 1982 on Chrysalis. It features 11 songs, including both sides of the first two singles. The back cover says “Co-Starring… Bananarama,” who feature on four songs, including “Sanctuary” and “Alone.” One further single, “The Telephone Always Rings,” followed the album’s release. The album was recorded at the Bridge Studios and co-produced between the group and Specials-producer Dave Jordan.

Fun Boy Three assembled a backing band consisting of female classical players — Annie Whitehead (trombone), Nicky Holland (piano), Caroline Lavelle (cello), and Nicky Parker (violin) — for a cover of Gershwin‘s “Summertime,” released in the late summer of 1982. The band, minus Parker, were retained for the next album. 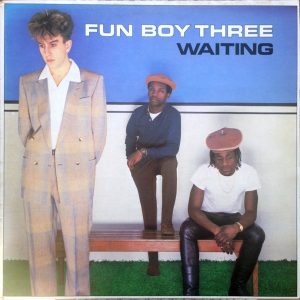 In February 1983, Fun Boy Three returned with Waiting, produced by David Byrne. It features 10 originals, including “We’re Having All the Fun,” “The Pressure of Life (Takes the Weight off the Body),” and “Well Fancy That!” The album yielded three singles: “The More I See (The Less I Believe),” “The Tunnel of Love” (U.K. #10), and “Our Lips Are Sealed” (U.K. #7), the last of those co-written with Jane Wiedlin of The Go-Go’s, whose version was a stateside hit the prior year. Additional musicians on the album include percussionist Geraldo D’Arbilly (Blue Rondo À La Turk, Animal Nightlife) and Specials cornetist Dick Cuthell.

Fun Boy Three disbanded in late 1983 after promotions wrapped for Waiting. Hall returned the following year in the sophisti-pop combo The Colourfield, which issued two albums on Chrysalis between 1985 and 1987. Golding and Staple joined the pop-reggae combo Sunday Best, which backed Selecter vocalist Pauline Black on the 1984 single “Pirates On the Airwaves.”

Robert Plant
Robert Plant (born Aug. 20, 1948) is an English vocalist and songwriter from West Bromwich who sho...
Donna Washington
Donna Washington is an American soul singer from Los Angeles. Discography: For The Sake Of L...
U8
U8 were an Austrian hard-rock/metal band from Nussdorf, Salzburg, that released the album Pegasus ...
Jet
Jet were an English art-rock/pop band that released a self-titled album on CBS in 1975. The band w...
Saxon
Saxon are an English hard-rock/metal band from Barnsley that released six albums and a live disc o...