Fruupp was an Irish symphonic-rock band that released four albums on Dawn between 1973 and 1975.

The band formed in 1971 when guitarist Vincent McCusker enlisted singer/bassist Peter Farrelly, keyboardist Stephen Houston, and drummer Martin Foye, all classically trained. That summer, they rehearsed in an old Belfast house, supposedly haunted by a ghost named Fruupp, hence their name. They were managed by Paul Charles, who doubled as their roadie and occasional lyricist.

Over the next two years, Fruupp embarked on a string of live performances, including dates with Budgie, Curved Air, Genesis, Graphite, Quiver, Slade, Stackridge, and Supertramp. They developed a body of material, mostly written by McCusker, including the popular showpieces “Be Glad” and “Steam Machine.” In March 1973, they made a demo tape that landed in the hands of Pye Records, which signed Fruupp to its Dawn division. 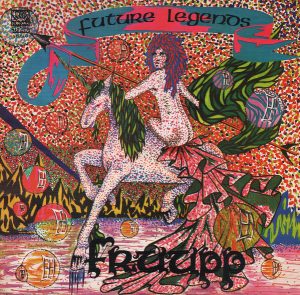 Fruupp released their debut album, Future Legends, in October 1973 on Dawn (UK). It features five McCusker originals in the 5–7-minute range, including “Song for a Thought,” “Decision,” and “Lord of the Incubus.” Charles contributed to “Graveyard Epistle,” the climactic epic of side one. A title-sake prelude/postlude bookends the album.

McCusker and Charles co-wrote “Graveyard Epistle” as a last-minute replacement for “On a Clear Day,” a band-favored piece that was blocked from inclusion by the estate of Gustav Holst, which objected to the song’s interpolation of “Jupiter” from Planet Suite (despite the fact that Manfred Mann’s Earth Band appropriated the same piece that year on their hit “Joybringer”). 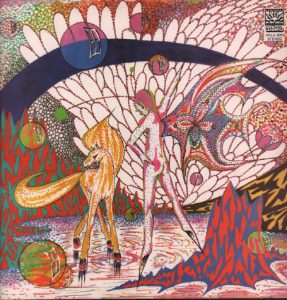 Farrelly painted the Future Legends gatefold: a psychedelic meadow with a nude hippie girl on the back of a pond-walking unicorn, surrounded by spherical objects (front), overlooking a pink fairy and gold pony (back), rendered primarily with dots. The bright green inner-spread features white-text credits and lyrics to two songs (“Lord of the Incubus,” “Olde Tyme Future“), plus the Charles poem “The Tramp and the Priest.” Photographer Marie O’Connell captured the oval image of the grass-seated quartet.

In 1974, Future Legends appeared in France (on Pye) and Japan. In 2009, Esoteric Recordings reissued the album with “On a Clear Day” added as a bonus ninth track. 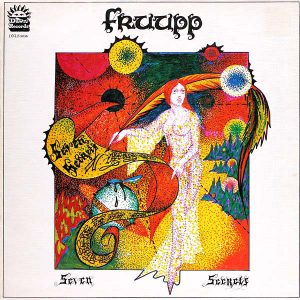 Fruupp’s second album, Seven Secrets, appeared in April 1974 on Dawn (UK, Japan). Houston contributed two numbers, “Faced With Shekinah” and “Elizabeth,” while McCusker and Charles co-wrote “Wise As Wisdom,” “White Eyes,” and “Three Spires.” McCusker himself composed the nine-minute “Garden Lady.” A titular postlude, “The Seventh Secret,” closes the album. That and the five-minute “Three Spires” are the only cuts short of the 7–9-minute range.

Seven Secrets was recorded at Escape Studios with producer David Lewis, the one-time mastermind of Andwella’s Dream who plays piano on “Spires.” Taverner engineered the album just prior to his work with the Kursaal Flyers, Nazareth, and Zzebra. Rennie once again conducted orchestral passages. 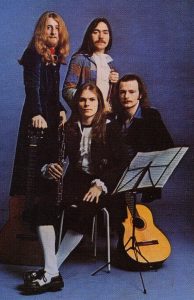 The Seven Secrets cover, painted by Farrelly, is a pointillist depiction of a raven-haired cosmic lady in a sheer flared gown, surrounded by floating spheres with a feather pen in hand, writing the title on paper unfurled from a black orb. The picture on back shows Fruupp posed in neo-Baroque hippie attire. The Planet Suite, a Charles short story, accompanies the photo. Lyrics appear on the lime green inner-sleeve. Original UK copies are pressed on translucent burgundy vinyl, which shows when held before light.

The Prince of Heaven’s Eyes 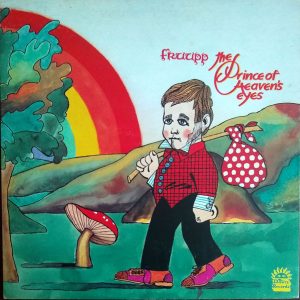 Fruupp issued their third album in 13 months, The Prince of Heaven’s Eyes, in November 1974 on Dawn (UK, Japan). This time, Houston composed the lion’s share, including all of side one plus “Seaward Sunset” and the 10-minute epic “The Perfect Wish.” McCusker contributed “Knowing You” and “Crystal Brook.”

Sessions took place during August and September 1974 at Morgan Studios, London, with engineer Roger Quested, whose credits went back to 1969/70 titles by Audience, Delivery, T2, Trapeze, and Trees. Most recently, he engineered albums by Esperanto and Camel. The Prince of Heaven’s Eyes is Fruupp’s only self-produced album.

Late in the sessions, all four members co-wrote “Prince of Heaven,” a short track about the album’s concept. It was withheld from the album but issued as a single (b/w “Jaunty Car”). Fruupp also plugged the album with “The Prince of Darkness” (b/w “Annie Austere”) and embarked on a fall tour.

The Prince of Heaven’s Eyes features a watercolor painting by Graham Marsh, who also illustrated a 1973 compilation album by Smokey Robinson & the Miracles. The gatefold shows a sad little boy walking with a bindle through a mushroom-laden, rainbow-illuminated valley.

“Prince of Heaven” and “Future Legends” appear on Has It Dawned On You?, a 1975 label comp with tracks by Gravy Train, Kilburn and the High Roads, Prelude, Quicksand, and Stray.

Despite Houston’s creative emergence, he left Fruupp in January 1975 to become a clergyman. 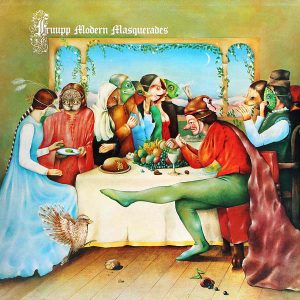 The album was engineered by Chris Kimsey (Peter Frampton, The Movies, Stray Dog, Ten Years After) with assistance from Dave Hutchins, whose short list of credits (Gonzalez, Heavy Metal Kids, Sharks) ballooned after his recent work on The Lamb Lies Down on Broadway by Genesis.

Artist Robert Howe illustrated the Modern Masquerades cover. It depicts a Renaissance banquet with revelers crowded around the food table in animal masks. A restless-legged jester appears to have dropped grapes on the floor, just as a housebird closes in on a slice of focaccia.

The back cover, photographed by Martyn Goddard, shows Fruupp grouped around a fireplace in a classic living room. Farrelly and Foye, both long-haired and mustachioed, sit foreground in vintage garb and velvet jackets. Mason and McCusker stand behind them in medium hair and conventional attire. This was the first credit for Goddard, whose photography soon appeared on albums and singles by Charlie, The Jam, Jigsaw, Léne Lovich, The Real Thing, and Trevor Rabin.

Pye issued a 7″ of the album’s shortest track, “Janet Planet” (b/w “Why”). Fruupp embarked on a December–February UK tour that included a show at the Friars Club in Aylesbury, taped for an intended live album. The tapes were later lost in a fire at their shared Peckham flat.

Mason is credited along with American composer Craig Pruess and his jazz-rock band, Visitor 2035, on Cain!, a self-released 1976 four-sided concept album with religious themes.

In 2007, American rapper Talib Kweli had a Billboard No. 2 hit with “Soon the New Day,” based on a sample of “Sheba’s Song.”