Fresh Maggots were an English folk-psych band from Nuneaton, Warwickshire, that released a self-titled album and a standalone single on RCA Victor, both in 1971.

Guitarist Leigh Dolphin and multi-instrumentalist Mick Burgoyne first met as children, then again as teenagers when they formed their writing partnership. They signed to RCA at age 19. 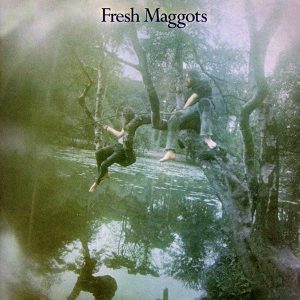 Fresh Maggots released their self-titled album in September 1971 on RCA Victor. It features 11 originals, most of them one/two-chord ruminations on might, war, death, and loss. Their sound features prominent use of fuzz-tone, enhanced with string-laden, drummer-less arrangements.

Half the tracks are orchestral tapestries, such as the double-plucked ballad “Rosemary Hill,” where glockenspiel and cello waves color the song’s Dm tonality. Symphonic backing, courtesy of arranger Brian Rogers, is heard in the plucked, strummed strings of “Spring” and the chamber strokes that outline “Who’s to Die.”

Fuzz-tone covers several tracks, notably the flute-laced “Dole Song” and double-strum enmeshed “Balloon Song.” They counter sizzling tones with brisk acoustics in the timely lament “Everyone’s Gone To War,” paused intermittently with poignant verses. A headier round of acoustic/fuzz interplay commences on “Frustration,” where volumes rise and fall amid poetic lines that ultimately yield to a string-soaring climax.

The sunny tin whistle ditty “And When She Laughs” serves as an upbeat, major-key break from the surrounding intensity.