Forty-Seven Times Its Own Weight were an American jazz-rock band from Austin that released the album Cumulo Nimbus on local-press Fable Records in 1975. 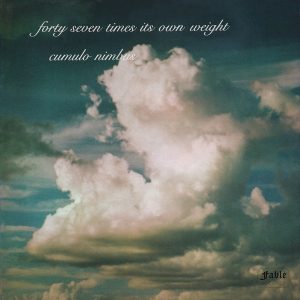 Along with Steam Heat and Starcrost, FSTIOW were one of only three Fable acts to issue albums during this period. All were produced by label-heads Mike Mordecai and Patrick Rockhill. The album art on Cumulo Nimbus is co-credited to Dallas musician Mike Morgan, also responsible for cover visuals on the eponymous 1976 Starcrost album.

Winters and saxophonist Paul Ostermayer concurrently played on Steam Heat’s singular album Austin Funk. Drummer John Treanor played percussion on the track “Minus Mufflers” on the eponymous 1975 album by fellow jazz-rockers Electromagnets. He later appeared on one album by second-period Fable act Beto and the Fairlanes.

In 2019, the FSTIOW tracks “March of the Goober Woobers” and “Cumulo Nimbus” were paired on 7″ by archivists Dynamite Cuts.

The Pointer Sisters
The Pointer Sisters were an American soul-pop group from Oakland, formed in 1969 by sisters Anita,...
Willis Jackson
Willis Jackson (April 25, 1932 – Oct. 25, 1987) was an American tenor saxophonist who released more ...
Stephen Bishop
Stephen Bishop (born Nov. 14, 1951) is an American singer/songwriter who debuted with the 1976 ABC...
Stevie Nicks
Stevie Nicks (born May 26, 1948) is an American singer and songwriter from Phoenix who first emerg...
Jack Bruce
Jack Bruce (1943— 2014) was a Scottish-born bassist, vocalist, and composer who played in a series...