The Fire Engines were a Scottish art-punk band from Edinburgh that released the album Lubricate Your Living Room on Bob Last’s Pop:Aural Music small-press in 1980. Just prior to the band, vocalist Davy Henderson cut an EP with Leicester combo the Disco Zombies. During the late 1980s, he recorded two albums with electro-posters Win alongside ex-Happy Family drummer Ian Stoddart. 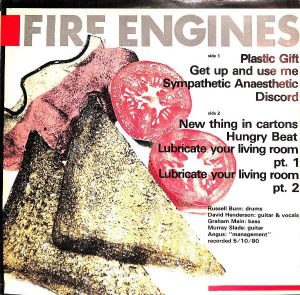 Lubricate Your Living Room was recorded on Oct. 5, 1980 and produced by Fast Product/Pop:Aural founder Bob Last, who also oversaw recordings by Gang of Four, The Mekons, and Drinking Electricity. The album consists of nine originals with a total running time of 29:30. The numbers are semi-improvisational and mostly instrumental.

“Hungry Beat” (4:31): Trebly, scratchy guitars entangle in B♭: one snaky and direct, the other scribbly and diffuse. The two overlay a loopy beat that accents two’s and double-fours. During the bridge, a throbbing bassline comes to the fore amid distant noises akin to subway sounds. The climax is hinted with rising guitar shards.

“Sympathetic Anaesthetic” (3:12): A crawling bassline entwines with a ringing, rupturous guitar tone that hoverers in A amid constant tonal overspills. A one-man tribal precision marks the beat. The guitar takes a wiggly, vibrato tone as the fadeout nears.

“Discord” (6:51): Contoured guitar interlocks with bobbing bass in B. The two are beset with discordant, secondary guitar amid a clickety drum pattern. Guitar-wise, the structure alternates between twin-lead verses and fractious chordal bridges, all in the same key. A dropout at 2:30 highlights the persistent, galloping bassline, which is soon flanked by alternately fractious/snaky guitar interjections. At around 4:00, the rupturous guitar interplay breaks for a duel of mirroring mono-notes that drone to the fadeout.

By forgoing vocals, Fire Engines maximized the instrumental experimentation of the 1980 UK small-press scene. Their knack for piercing leads, chordal dissonance, and alternately snappy/stumbling rhythmic components places them at the sonic midway between Manchester/Leeds post-punk (In Camera, A Certain Ratio, Gang of Four, Delta 5) and New York No Wave (James White/Contortions, Decoding Society).