Fields was an English organ-rock trio that released a self-titled album on CBS in 1971. They were formed by ex-Rare Bird organist Graham Field.

Graham Field (aka Graham Frederick Stansfield, May 3, 1940 — April 13, 2018) hailed from the organ-rock/psych combo Rare Bird, appearing on the band’s first two albums Rare Bird (1969) and As Your Mind Flies By (1970). He formed Fields at the insistence of Robert Fripp, who encouraged the organist — distraught over the initial breakup of Rare Bird and contemplating a return to his former profession, teaching — to try band life a second time.

Fields singer/guitarist/bassist Alan Barry had cut a string of 1969 singles with psych-rockers Shy Limbs and The Actress. Drummer Andy McCulloch played on 1970 albums by King Crimson (Lizard) and Manfred Mann Chapter Three (Volume Two). He was recommended to Field by Fripp. 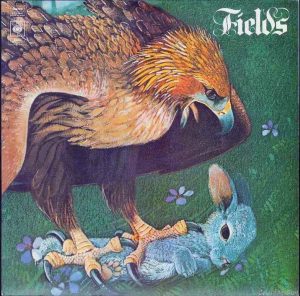 Fields was released in 1971 on CBS (U.K./Europe) and Epic (Canada, Japan). It features five songs per side in the 3–5-minute range, including “Over and Over Again,” “The Eagle,” “A Friend of Mine,” and “Three Minstrels,” the last two paired on the band’s lone 7″. Those and four other songs were written by Field, who split credits on “The Eagle” with Barry, who wrote the remaining two numbers.

The self-produced album was recorded at London’s I.B.C. Studios and engineered by Bryan Stott (Bee Gees, Titus Groan, Tony Hazzard). The gatefold cover was illustrated by one Colin Paynton.

Musically, Fields is dominated by thick Hammond organ-work and a strong bass presence, comparable to ELP‘s heavier moments. Barry plays a double-neck bass/guitar on the album.

Field initially planned to follow Fields with a double-album comprised of one record with long tracks and a second with short songs. A more conventionally formatted second album was recorded in 1972 but remained unreleased until 2015 when it was issued as Contrasts: Urban Roar to Country Peace by archivists Esoteric Recordings. The album features singer/bassist/guitarist Frank Farell in lieu of Barry.

Field produced and played harpsichord on the 1975 album Ancient Maps by singer/songwriter Bob Pegg. McCulloch joined the symphonic supergroup Greenslade, recording four albums with the band between 1973 and 1975. Barry resurfaced in King Harry, which released the album Divided We Stand on EMI in 1977.