F.B.I. was a nine-piece English funk band that released a self-titled album on Tony Visconti’s Good Earth label in 1976.

Fealdman first appeared in the blues-psych band Jasper, which cut the 1969 album Liberation on Spark Records. In 1970, he joined the brass-rock septet Trifle, which cut the 1971 album First Meeting on Dawn. In that band, he played alongside trumpeter Dick Cuthell, who enjoyed a prolific subsequent career (Nasty Pop, The Specials, The Selecter, Joan Armatrading, Chas Jankel, Level 42, etc).

Holder and Smith played on the 1975 albums Is Having a Wonderful Time by American bluesman Geoff Muldaur and Mind Your Own Business! by Irish folksters Henry McCullough. As F.B.I. got underway, Holder played on the 1976 albums Renowned by the Irish folk duo Gay & Terry Woods (once of Steeley Span) and Howlin Wind, the debut album by Graham Parker and the Rumour.

Meade played on the 1976 release Feel the Rhythm by long-running Jamaican reggae trio The Pioneers.

Jackson hailed from Carriacou, West Indies. Between 1968 and 1970, he cut four singles on UK indie Beacon as half of the soul-funk duo Root & Jenny Jackson. 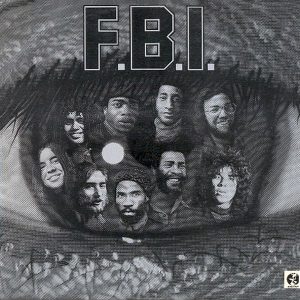 F.B.I. released their self-titled album on Good Earth in 1976. It features four songs per side: six originals and covers of Stevie Wonder (“Keep On Running“) and J.R. Bailey (“Love, Love, Love”). The others are credited between the band and select members, such as “Talking About Love” (Wilkinson/Holder), “Free Prison” (Black), “Bad Deal” (Jackson), and “Let Me Love You” (Wilkinson).

The band’s theme song, “F.B.I.” (Jackson/Pereira), starts the album. It was lifted as a 7″, backed with the Wilkinson/Holder “The Time Is Right to Leave the City.”

The cover art to F.B.I. is by illustrator Roger Lowe, who also did album visuals for Alvin Lee. It shows the nine members inside an eye. Thematically, this recalls the close-up eye visual of 1969–71 albums by Swinging Soul Machine, The Greatest Show On Earth (Horizons), and Supersister (To the Highe$t Bidder).

Holder and Lloyd locked horns on one track (“It’s Our Time”) on the 1977 album Message Man by Eddy Grant. Holder played on 1979–81 albums by the African artists Jake Sollo, Tom Youms, Kofi Ayivor, and Sonny Okosuns Ozziddi, plus the multi-national Black Slate. In 1982, he played on Pelican West by Haircut One Hundred. He also appears on one track (“Preachin’ Genocide”) on Grant’s 1980 fourth solo album Love In Exile, which features Meade on the track “Use It or Lose It.”

Fealdman played on the 1977 album Golden Flight by Japanese singer Momoe Yamaguchi. He then joined Sniff ‘n’ the Tears for their 1978 first album Fickle Heart. In the ’90s, he surfaced behind ex-Moon vocalist Noel McCalla.

Jackson cut the 1991 funk album Freestyle with Unfinished Business. Their self-named track appears on the b-side of a 1992 archival F.B.I. single that pairs “Talking About Love” with the long-vaulted “Get That Ball.” The last of those has since been added as a ninth track on CD versions of F.B.I., as issued on Kongo Dance (1992) and Soul Brother Records (2001). In 2011, Big Break Records ‎reissued F.B.I. with the addition of “Tell the Truth” and two live numbers, “Zilch” and the 13-minute “Lead Us.”

Rory Gallagher
Rory Gallagher (March 2, 1948 — June 14, 1995) was an Irish blues-rock/hard-rock guitarist who was...
Frob
Frob were a German instrumental quartet that was active during the mid-1970s. Formed in 1973, the ba...
Garfield
Garfield were a Canadian art-rock band fronted by namesake musician/songwriter Garfield French. Th...
Return to Forever
Return to Forever was an American jazz-rock supergroup that evolved from a namesake 1972 solo albu...
Noel Pointer
Noel Pointer (Dec. 26, 1954 — Dec. 19, 1994) was an American jazz-funk violinist, composer, and pr...
Happy the Man
Happy the Man are an American symphonic-rock band that released two albums on Arista in 1977 and 197...
Carla Bley
Carla Bley — aka Lovella May Borg (born May 11, 1936) — is an American jazz pianist and composer f...
Tømrerclaus
Tømrerclaus — aka Claus Clement Pedersen (born Nov. 21, 1945) — is a Danish cellist from Århus, Jy...
Walter Jackson
Walter Jackson (March 19, 1938 — June 20, 1983) was an American soul singer from Pensacola, Fla. ...
Strapps
Strapps were an English hard-rock band that released three albums on Harvest between 1976 and 1978...
Melodia
Мелодия (Melodia) are a Russian jazz-funk big band from Moscow, started in 1973. The band released...
Meal Ticket
Meal Ticket were an English rustic-rock band that released the album Code of the Road on EMI Inter...