Fay Ray was a Welsh post-punk band that released the album Contact You on WEA in 1982.

The name Fay Ray is a play on 1930s Canadian actress Fay Wray, best known as the heroine in the 1933 monster-adventure King Kong.

Fay Ray debuted with the single “Family Affairs” (b/w “Didn’t Have To Say That”). It was produced by Nigel Gray (Siouxsie & the Banshees, The Police, Godley & Creme, Hazel O’Connor, The Planets, Wishbone Ash) and released in 1980 on his exclusive Surrey Sound Records label. 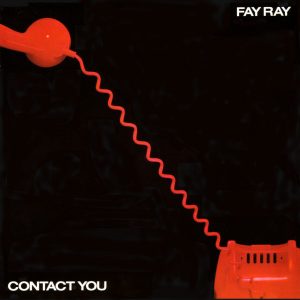 In 1981, Fay Ray recorded tracks with Gray for what would become their singular album, Contact You. It was released in 1982 on WEA (UK, NZ, NDL, Germany) and Elektra (US).

Contact You features ten songs, including the aforementioned a-side plus “(Waiting for the) Heatwave,” “Love Is Strange,” “Wargames,” “Cold as Steel,” and a re-recorded “Different Morning.” “Heatwave” was issued as a single, backed with the non-album “I Wish.” The recording was engineered by Pete Buhlmann (Bruford, The Passions, Gary Numan, Eurogliders) and mixed by Martin “Thing” Moss (Greenslade, The Enid, Jethro Tull).

The album cover for Contact You was illustrated by the firm A.D. Design, which also did album art for Van der Graaf Generator (World Record), Patrick Moraz (Out In the Sun), Steve Hackett (Please Don’t Touch!), Brand X (Masques), and Bow Wow Wow (When The Going Gets Tough, The Tough Get Going).

Fay Ray recorded material for a second album that never materialized. Contact You was first reissued in 2018 on the reformed band’s eponymous press with five bonus tracks.

Judie Tzuke
Judie Tzuke (born April 3, 1956) is an English vocalist and songwriter from London who released th...
Bedjabetch
Bedjabetch were a French jazz-rock band that released the album Subrepticement on self-press A.W.A...
Cultural Noise
Cultural Noise were an Austrian electronic trio that released the album Aphorisms Insane in 1980 o...
Level 42
Level 42 were an English jazz-funk band from the Isle of Wight that released seven studio albums a...
Stevie Nicks
Stevie Nicks (born May 26, 1948) is an American singer and songwriter from Phoenix who first emerg...