Redding (1945–2003), known at large as the active bassist in the Jimi Hendrix Experience, formed Fat Mattress as a band where he could sing, play guitar, and record his own material. He knew Leverton and Landon from the early ’60s band scene in South East Kent. Leverton and Dillon both played in the backing band of singer Engelbert Humperdinck.

Just prior to Redding’s time in the Experience, he and Leverton (b. 1946, Dover) cut three 1966 Piccadilly singles in The Loving Kind.

Fat Mattress played its first major live shows as the opening act for the Jimi Hendrix Experience on a US tour, on which Redding played with both bands each night. 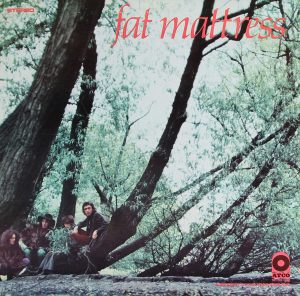 Fat Mattress released their self-titled debut album on Polydor on August 15, 1969. It features 10 originals: four by Landon/Redding (“I Don’t Mind,” “Petrol Pump Assistant,” “Mr. Moonshine,” “How Can I Live”), three by Landon/Leverton (“All Night Drinker,” “Bright New Way,” “Magic Forest”), two sole-composed by Redding (“Everything’s Blue,” “Walking Through a Garden”), and one by Landon alone (“She Came in the Morning”).

Fat Mattress was self-produced over the prior winter with engineer George Chkiantz (Family, Hawkwind, High Tide, Day of Phoenix). Experience colleague Mitch Mitchell plays drums on “How Can I Live,” which also features Hendrix himself on percussion. Traffic reedist Chris Wood plays flute on “All Night Drinker.” The original Polydor pressing came in a four-fold sleeve. Stateside, the album appeared on ATCO in a single sleeve with the cover image shifted upward.

In late 1969, sessions commenced for the second Fat Mattress album. Midway through, tensions arose between Redding and Leverton. Redding cleared out for guitarist Steve Hammond, best known for writing “Gemini,” recorded in 1968 by Eric Burdon & the New Animals and later cut by Quatermass and Odin. They welcomed a fifth member, keyboardist Mick Weaver (aka Wynder K. Frog), whose presence allowed Leverton to focus on bass. 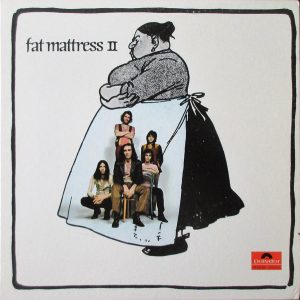 The resulting Fat Mattress II appeared on Polydor (UK) and ATCO (US) in 1970. Redding plays on six of the 11 tracks and co-wrote the last three (“Highway,” “At the Ball,” “People”) with Landon, who sole-composed “She.” The remaining tracks are Landon/Leverton originals, including “Roamin,” “The Storm,” “Leafy Lane,” “Childhood Dream,” and the pre-released a-side “Naturally.”

Like its predecessor, Fat Mattress II was self-produced with engineer Chkiantz. “Highway” was issued as a single, backed with Hammond’s “Black Sheep of the Family,” covered that same year on the self-titled album by Quatermass. (Deep Purple guitarist Ritchie Blackmore was so partial to “Black Sheep” that he broke off and formed Rainbow to cover the song.)

Fat Mattress dissolved during sessions for a long-vaulted third album. Its contents — “Margarita,” “Cold Wall of Stone,” “Words,” “Long Red” (a Mountain cover), “Future Days,” and the 17-minute “The River” — appear on the 2009 CD reissue of Fat Mattress II on Esoteric Recordings. Esoteric also reissued Fat Mattress with the addition of their non-album sides and four unearthed tracks: “Little Girl in White,” “Eric the Red,” “Hall of Kings,” and “Which Way to Go.”

Redding moved to Los Angeles and formed the rock trio Road with ex-Rare Earth guitarist Rod Richards. In 1972, they issued a self-titled album, which features Redding on bass and vocals. He then moved to Ireland and formed the Noel Redding Band with multi-instrumentalist David Clarke (aka Dave Carlsen) and guitarist Eric Bell, an original member of Thin Lizzy. They cut two 1975/76 albums on RCA.

Dillon played on Bright City, the 1971 solo album by Scottish guitarist and songwriter Miller Anderson (Keef Hartley Band, Dog Soldier, Broken Glass). In 1972, he played on the first album by rustic-rockers Tranquility and the second album by comedy folkster Mike Absalom. He then joined Anderson’s blues-rock combo Hemlock for a 1973 album on Deram. During the mid-’70s, Dillon did a two-album stint in Savoy Brown, where he reunited with Leverton. In 1980, Dillon surfaced in hard-rockers Lion with vocalist Gary Farr and keyboardist John Sinclair (Heavy Metal Kids, The Babys, Uriah Heep).

Leverton joined blues rockers Juicy Lucy for their 1971 third album Get a Whiff a This. He then played alongside keyboardist Zoot Money on the 1972 Epic release Riding on the Crest of a Slump, the first of two albums by Ellis, the namesake vehicle of ex-Love Affair vocalist Steve Ellis. Later on, he played on albums by Marianne Faithfull, Jim Capaldi, Sam Brown, and ex-Spooky Tooth guitarist Henry McCullough. In the ’90s, Leverton recorded and toured with a reformed Caravan.

Landon moved to Germany, where he released a 1975 self-titled solo album on Nova, produced by Achim Reichel. During the late ’70s, he cut several albums with retro-’50s rockers Rudolf Rock & Die Schocker.

Concurrent to his time in Fat Mattress, Hammond played on the 1970 album From Here to Mama Rosa by The Hill, fronted by Chris Farlowe. That too contains a version of “Black Sheep,” plus five songs co-written with Hill bassist Bruce Waddell. Hammond then produced and played on two 1971–73 jazz-rock albums by trombonist Chris Barber. During the late ’70s, Hammond co-wrote several songs for rustic-rockers Meal Ticket.