Family evolved from R&B/beat group The Farinas, formed in 1962 Leicester by guitarist John “Charlie” Whitney and saxophonist Jim King. They issued one single, “You’d Better Stop” (b/w “I Like It Like That”), on Fontana in 1964. Bassist Ric Grech (1946–1990) joined the band in 1965. The following year, Roger Chapman became their vocalist. During a brief period where they gigged as The Roaring Sixties, American producer Kim Fowley suggested they rename themselves The Family because of their suited, mafioso-like image.

As psychedelia took hold on the London club circuit, the newly renamed Family became regulars at The Marquee and the 100 Club. They cut their first single, the Chapman/Whitney-penned “Scene Through the Eye of a Lens” (b/w “Gypsy Woman“), with producer Jimmy Miller (Traffic, Spooky Tooth) and musical guest Steve Winwood. It was released on Liberty in October 1967, just before drummer Rob Townsend joined the lineup. Weeks later, Family became the first UK act signed to Reprise Records. That December, they commenced work on their debut album at London’s Olympic Studios.

On July 19, 1968, Family released their debut album Music in a Doll’s House. It features 12 proper songs, plus three interludes (“Variations on a Theme…”) and a hidden postlude of “God Save the Queen.” Chapman and Whitney wrote all the songs apart from the Dave Mason-penned singalong “Never Like This” and the violin-strewn “Hey Mr. Policeman,” co-written by Grech.

Musically, Doll’s House mines the schizophrenic end of the psych spectrum, from the shivering “Voyage” to the droning “Peace of Mind” and the echoey “Winter,” all marked by flare-ups, pauses, and explosions in the vocal and instrumental departments. Panning is used for a haunting effect on “See Through Windows,” with its blurred harmonies and fade-in/fade-out instruments. Chapman’s distinct, vibrato-laden voice takes center on the yelping opening notes of “The Chase.” The bluesy “Old Songs New Songs” features jazz backing during its climactic section by the Tubby Hayes group, conducted by an 18-year-old Mike Batt (uncredited).

Mason, who adds Mellotron on select numbers, produced Doll’s House with help on two tracks (“The Breeze” and “Peace of Mind”) from Miller, who was slated to produce the whole album but was tied by commitments to The Rolling Stones and sessions for their work-in-progress, Beggars Banquet. Family returned favors by backing Mason on his 1968 solo b-side “Little Woman.” Doll’s House was engineered by Traffic/Hendrix studio-hand Eddie Kramer with assistance from Olympic’s George Chkiantz (Fat Mattress, Soft Machine, High Tide). The cover was designed by one Peter Duval.

In November 1968, Family issued the single “Second Generation Woman,” a driving fuzz-rocker reminiscent of “Paperback Writer.” It was was their first song written entirely by Grech (b/w the Chapman–Whitney folk-psych ballad “Home Town”). The a-side appears, along with two further Grech compositions (“How-Hi-the-Li” and “Face in the Cloud”) on the band’s second album Family Entertainment, recorded that winter and released in March 1969. 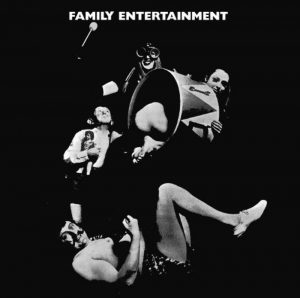 Family Entertainment features 11 originals, five by Chapman–Whitney, including the acoustic strum-along “Observations From a Hill,” the banjo-picking “Dim,” and the declamatory opener “The Weaver’s Answer,” which became their signature song. Chapman takes his acidic vocal delivery to its raspy, wavering extreme on the flute-spiced gallop “Hung Up Down.” Grech joined the pair in writing “Emotions,” a percussive romp marked with steelpan and an elongated wordless vocal coda.

With their second album in the UK Top 10, Family undertook their first tour of the states, where a microphone mishap at Bill Graham’s Fillmore West put them on bad terms with the promoter. Mid-tour, Grech left the band to join Winwood and Cream alumni Eric Clapton and Ginger Baker in the supergroup Blind Faith. His replacement in Family was multi-instrumentalist John Weider, most recently of Eric Burdon’s “New” Animals. Like Grech, he played bass and violin.

Returning to the UK, Family were one of the opening acts for The Stones in the Park, a free concert held by The Rolling Stones in London’s Hyde Park on July 5, 1969. The following month, Family played the first Isle of Wight Festival. Their set was on Saturday the 30th alongside performances by Blodwyn Pig, Joe Cocker, Battered Ornaments, Blonde On Blonde, Free, The Who, the Edgar Broughton Band, and King Crimson.

In October 1969, Family issued their first Weider-era single, the rustic ballad “No Mule’s Fool” (b/w the raunchy “Good Friend of Mine”). Soon after its release, King left the band for oft-disputed reasons. He was replaced by multi-instrumentalist John “Poli” Palmer, a brief Blossom Toe who’d recently partaken in the multi-national folk-rock project Eclection. 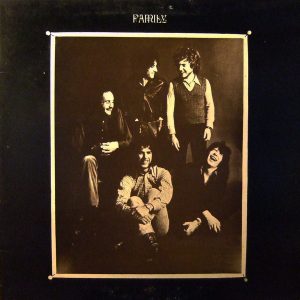 Late that year, Family recorded its third album, A Song for Me, released on January 23, 1970. It features seven Chapman–Whitney co-writes, including “Love Is a Sleeper,” “Some Poor Soul” and the jazz-vibe miniature “Hey – Let It Rock,” which segues into the sprinting twang rocker “The Cat and the Rat.” One track, “Wheels,” was co-written during the Grech era. Whitney and Weider co-wrote the instrumental “93’s O.K. J.” The nine-minute title track is a band composition.

“Love Is..” features an organ part by George Bruno (aka Zoot Money). A Song for Me was housed in a gatefold sleeve with a sepia-tinged band photo by Bill Holden. The self-produced effort was engineered by Chkiantz. The album reached #4 on the UK chart.

In May 1970, Family issued the non-album single “Today,” a rhythmless five-minute ballad with calm Chappo vocals and slide/acoustic interplay. It was backed with “Song for Lots.” 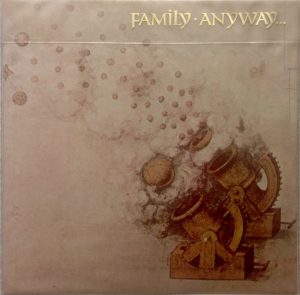 On July 26, 1970, Family held a show at Fairfield Halls, Croydon, where they performed a set that featured, among other things, four new Chapman–Whitney originals: “Good News – Bad News,” “Willow Tree,” “Holding the Compass,” and “Strange Band,” the last of those featuring an additional co-write by Robin Williamson of the Incredible String Band. These songs comprised side 1 of their fourth album, Anyway, released in November 1970. Side 2 contains four new studio tracks recorded that summer at Olympic Studios: three by Chapman–Whitney (“Part of the Load” “Lives and Ladies” and “Anyway”) and the Palmer–Whitney–Weider composition “Normans.”

Anyway features vibraphone (Palmer) on four tracks and violin (Weider) on three. As with its predecessor, the album was band-produced and engineered by Chkiantz. It reached #7 on the UK chart. The sleeve design, credited to Hamish & Gustav (Death Walks Behind You), appropriates a Leonardo Da Vinci illustration titled “Mortars With Explosive Projectiles.”

In March 1971, Family issued the rarities and outtakes compilation Old Songs New Songs, including a remixed “Home Town” with added vibraphone. That June, Weider jumped ship to Stud, a jam-rock trio formed by the rhythm section of Taste. Family replaced him with bassist John Wetton, recently of brass-rockers Mogul Thrash.

In July 1971, Family issued the standalone single “In My Own Time,” a gruff, mid-tempo blues-rocker with Cocker-esque caterwauling and a piping organ solo. The b-side, “Seasons,” is a fingerpicking country/folk number. Both songs are Chapman–Whitney originals. The single reached No. 4 on the UK Singles Chart. 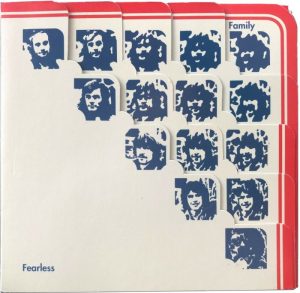 Family’s fifth album, Fearless, appeared in November 1971 on Reprise (UK, Europe, Oceania) and UA (North America). It features six Chapman–Whitney originals, including “Sat’d’y Barfly,” “Blind,” “Spanish Tide,” and “Save Some for Thee.” Palmer contributed “Larf and Sing” and the miniature “Crinkley Grin” and collaborated with the pair on “Burning Bridges” and “Take Your Partners.”

Fearless is the first of three Family albums with cover art by John Kosh, the designer of 1971 album visuals for Curved Air (Second Album), Mary Hopkin, McGuinness Flint, Paladin, and The Who (Who’s Next). Original copies have a rounded top-right corner and four diagonal fold-outs, one for each staircase in the blue/white photo-grid. The liner notes state “This album is dedicated to all the people who have pulled strokes for or against us, for they shall be called fearless”.

Fearless reached No. 14 on the UK Albums Chart. United Artists paired “Larf & Sing” and “Between Blue and Me” on 7″ in the US, where Fearless became Family’s first album to reach the Billboard 200 (No. 177). 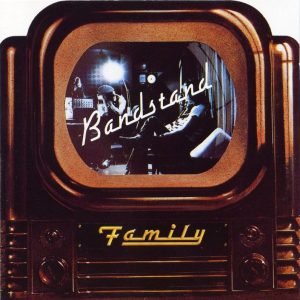 In September 1972, Family released Bandstand, a nine-song set with seven Chapman–Whitney originals, including “Ready to Go,” “Top of the Hill,” “My Friend the Sun,” and “Bolero Babe.” This is their second of two albums with Wetton, who collaborated with the pair on “Coronation,” a vibes/electric piano number with subdued, loungy verses and a rising chorus. Palmer and Chapman wrote “Dark Eyes,” a dark, rhythmless, harmony-laden miniature composed of piano, acoustic guitar, and flute.

Bandstand sports a gatefold cover, die-cut in the shape of a 1940s television set. The screen portion cuts to a fish-eyed studio pic on the inner-gate. Kosh designed the cover with photography by Peter Howe.

Just prior to the album’s release, Wetton departed for King Crimson. Family replaced him on bass with musician Jim Cregan, the guitarist in Stud along with Wetton’s predecessor in Family, John Weider.

Reprise issued “Burlesque” as a single, backed with the non-album Chapman–Whitney number “The Rockin’ R’s.” In December, Reprise paired the Bandstand tracks “My Friend the Sun” and “Glove” onto a single. “Burlesque” hit No. 13 on the UK Singles Chart while Bandstand reached No. 15 on the UK Album Chart.

Family promoted Bandstand with their third tour of the US, where the album reached No. 183 on the Billboard 200. They opened for Elton John on select dates, including two nights in October 1972 at the Community Theatre in Berkeley, California.

At the close of the tour, Family replaced Palmer with keyboardist Tony Ashton, fresh off a four-album run in the soul-rock trio Ashton Gardner & Dyke. 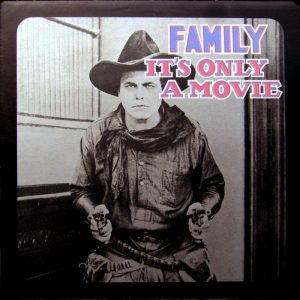 Family moved to WEA-subsidiary Raft Records for their May 1973 single “Boom Bang,” an open-cadence mid-tempo number with wailing high harmonies, ringing guitar tones, and a Spectorian whole-note kick drum. That and the exclusive b-side, “Stop This Car,” were co-produced by Chkiantz. This would be his last credit with the band.

Their seventh and final album, It’s Only a Movie, appeared in September 1973 on Raft (UK) and UA (North America). It features “Boom Bang” and seven additional Chapman–Whitney originals, including “Buffet Tea for Two,” “Sweet Desiree,” the instrumental “Banger,” and the title track. Cregan collaborated with the pair on the closing track, “Check Out.”

Family self-produced the album during the summer of 1973 at Olympic and AIR Studios, London, and Knowle Hall, Somerset. Medicine Head’s Peter Hope-Evans plays harmonica on “Leroy.”

It’s Only a Movie is housed in a single sleeve with a b&w photo of a Wild West gunslinger (front) and performance shots of each member (back). Original copies come with an insert card, The Banger, that gives mock instructions on how to make a banging sound, backed with a mock advertisement for a “New Single Action Frontier and Peacemaker” shotgun (“Regular price $16.00.”)

Advertisements for It’s Only a Movie announced it as Family’s farewell album, as the band decided to end things that fall. A final single accompanied this release: “Sweet Desiree,” backed with Cregan’s non-album “Drink to You.”

Family played their final concert on October 13, 1973, at Leicester Polytechnic.

Along with Julie Tippetts and Mike Patto, Roger Chapman sang backing vocals on two tracks (“Mighty Mystic Lady,” “We Need the Money Too”) on the 1973 Epic release Why Not?, the second of two albums by Ellis, the eponymous band of ex-Love Affair frontman Steve Ellis.

Propinquity
Propinquity were an American folk-psych band from Boulder, Colo., that released a self-titled alb...
Bobbi Humphrey
Bobbi Humphrey (born April 25, 1950) is an American jazz-funk flutist from Marlin, Tex. Bobbi ...
Apryl Fool
Apryl Fool were a Japanese psych-rock band from Tokyo that released a self-titled album on Columb...
Thin Lizzy
Thin Lizzy was an Irish rock band that released twelve studio albums between 1971 and 1983. They sta...
The Graham Bond Organization
The Graham Bond Organization were an English R&B/beat combo that released two albums on Columbia...