Eyes of Blue were a Welsh psych-rock-soul band that released two singles as “The Eyes of Blue” on Deram, followed by the 1968/69 Mercury albums Crossroads of Time and In Fields of Ardath. A name-change to Big Sleep produced the 1971 Pegasus release Bluebell Wood.

Keyboardist Phil Ryan became an on/off member of Man and its spinoff The Neutrons. Drummer John Weathers joined Gentle Giant for an eight-album run, starting with their 1972 fourth release Octopus.

They formed in Neath circa 1964 as The Mustangs, an R&B covers band that gigged the South Wales club circuit with a fluctuating lineup. By 1966, multi-instrumentalist and co-founder Ritchie Francis secured a stable lineup with singer Wyndham Rees, guitarist Ray Williams, drummer John Weathers, and two ex-members of Port Talbot rivals The Smokestacks: keyboardist Phil Ryan and singer Gary Pickford-Hopkins. 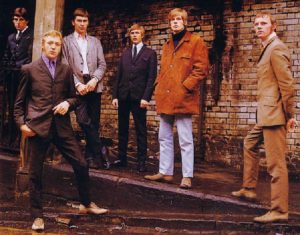 Weathers grew up in Swansea and started drumming as a teenager, just before he fled to Liverpool at the outset of the beat boom. With a sudden demand for rock drummers, he filtered through numerous Merseyside bands. After two years, he returned to South Wales as an in-demand, professional drummer. He passed through a couple of local acts (The Vikings, Brothers Grimm) and joined The Eyes of Blue just before their winning entry in the national Melody Maker ‘Beat Contest.’

The Eyes of Blue won a contract with Decca that yielded two singles on sublabel Deram comprised of soul-pop covers:

A. “Up and Down” (Nov. 1966) — Jolly harmonized singalong in A♭ with vibes and a four-down Motown beat. Written by “Black Is Black” songwriter Michelle Grainger and collaborators Steve Wadey and Tony Hayes, the team behind the 1966 Pye single “What Does She Want?” (b/w “Clock”) as Hayes and Wadey.
B. “Heart Trouble” — Flowing 4/4 beat number in G with soulful lead vocals amid ghostly, elongated backing vowels and a tambourine-driven chorus. Written by George Clinton and Sidney Barnes and originally recorded by The Parliaments.

Walker produced both singles along with numerous other Decca/Deram beat and pop-psych acts (The Fortunes, The Mockingbirds, The Virgin Sleep, Amen Corner). After the Decca contract expired, Eyes of Blue (without the definite article) signed to Mercury and recorded their debut album with producer Lou Reizner. 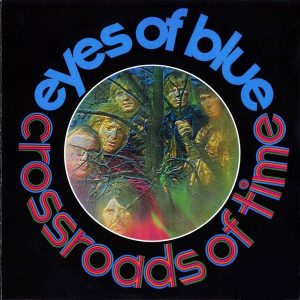 Eyes of Blues released their first album, Crossroads of Time, in September 1968 on Mercury in the UK, Netherlands, North America, and Japan. The album’s 11 numbers include six Francis originals: “Never Care,” “I’ll Be Your Friend,” “Prodigal Son,” and the closing trifecta of “I Wonder Why,” “World of Emotion,” and “Inspiration for a New Day.”

Crossroads of Time, features liner notes by Graham Bond, who declared Eyes of Blue “one of the high spots of the current Renaissance of the arts taking place in Europe.” Bond claimed to have written the songs “Crossroads of Time” and “Love Is the Law,” though the album’s credits (back and labels) attribute both compositions to his singer, Diane Stewart. The album also contains covers of The Beatles (“Yesterday”), Love (“7+7 Is”), and a Francis-arranged adaptation of Handel’s “Largo.”

Sessions took place at London’s Chappell Studios between March and July 1968. Reizner produced the album at the same time as Expressway to Your Skull by the Buddy Miles Express. He linked Eyes of Blue with American musician and songwriter Buzz Linhart, who they backed on the 1969 Philips release Buzzy, recorded in October 1968 at Rockfield Studios, a converted farmhouse in Monmouthshire, Wales. 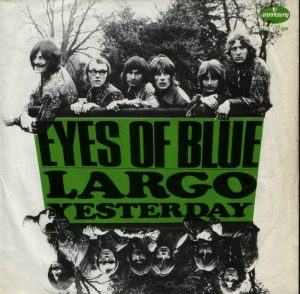 Mercury issued “Largo” as a single, backed with “Yesterday” (UK, Belgium) and “Crossroads of Time” (France). “Largo” appears on the 1969 French Fontana comp Top of the Pops with cuts by Aphrodite’s Child, Jerry Butler, Dusty Springfield, Manfred Mann, The Equals, and Jethro Tull. “Crossroads” appears on the German Mercury comp A Psychedelic Trip to Underground with tracks by the American acts Blue Cheer, Daughters of Albion, Linn County, Pearls Before Swine, The McCoys, and H.P. Lovecraft.

In early 1969, Reizner played Eyes of Blue to Quincy Jones, who was working in London on film scores, including The Toy-Grabbers. Impressed with their musical range, he hired them to provide songs for the film. One, the Francis original “Merry Go Round,” is the lead-off track on their second album, In Fields of Ardath, released in June 1969. 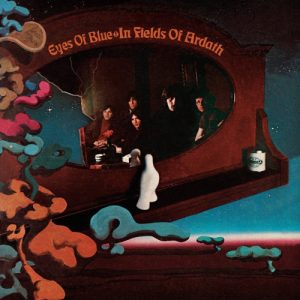 Jones wrote liner notes for the album, which also contains the Francis numbers “Little Bird” and “Chances,” plus two from Pickford-Hopkins (“The Light We See,” “After the War”) and one by Weathers (“Ardath”). Ryan composed “Extra Hour” and co-wrote “Door (The Child That Is Born On the Sabbath Day)” with new bassist Ray Bennett. The album also features the Bond composition “Spanish Blues” and the Django Reinhardt number “Souvenirs.”

That same year, Eyes of Blue issued the non-album “Apache ’69,” a psychedelic take on the early Ventures rock instrumental with soupy organ and legato guitar runs. (The appended title was also used on a cover by psych-rockers Velvett Fogg.) It was backed by “Q III,” a Deep Purple-style instrumental credited to L. Glas, short for Lygaid Glas, the Welsh translation of Eyes of Blue. The original UK pressing of the single (MF 1080, Feb. 1969) gives the band a pseudonym, The Imposters.

In 1970, Eyes of Blue appeared in the British drama film Connecting Rooms starring Bette Davis and Michael Redgrave. The band wrapped then reformed months later (without Rees) as Big Sleep.

Weathers got involved with Strawberry Dust, a Rhondda rock quartet with singer Gareth “Morty” Mortimer and guitarist Graham Headley Williams. He brought them to the attention of Reizner, who signed them to Mercury. Their Weathers-produced album, Women and Children First, appeared in July 1970 under the name Ancient Grease. It features 10 bluesy hard-rock numbers, including seven composed or co-written by Weathers, who’d stockpiled material that he didn’t find suitable for Eyes of Blue. He and Pickford-Hopkins (who co-wrote two cuts) guest on the album, which also features Ryan’s “Where the Snow Lies Forever.” Morty and Headley Williams later formed Racing Cars. 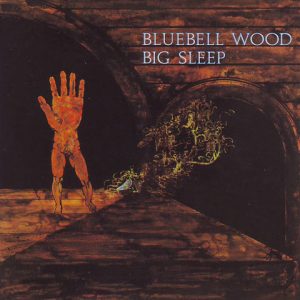 Side one contains two songs apiece by Francis (“Aunty James,” “Saint & Sceptic”) and Weathers (“Death of a Hope,” “Free Life”), plus  Hopkins’ “Odd Song.” The Francis-composed flipside features the 11-minute title track and two shorter numbers, “Watching Love Grow” and “When the Sun Was Out.”

Bluebell Wood was engineered John Timperley (Cream, The Herd). The gatefold cover is credited to Steve Thomas Associates (Amazing Blondel, Rumpelstiltskin). It depicts a dark corridor setting with a hand-headed figure (front) and a dismembered leg-headed figure (back). The inner-spread shows each member pictured per square on a checkered cube. Reizner produced the album just after his role on Gasoline Alley, the breakthrough release by Rod Stewart.

“When the Sun Was Out” first appeared in France and Spain as the b-side of a 1970 press of “Largo” on Philips.

In early 1971, Pickford-Hopkins and Weathers (along with Headley Williams) joined the formative lineup of Wild Turkey, assembled by ex-Tull bassist Glenn Cornick. Pickford-Hopkins sang and played acoustic guitar on the band’s first album, Battle Hymn. In 1973, he sang on most of You & Me, the solo album by Ten Years After keyboardist Chick Churchill. During 1974/75, Pickford-Hopkins co-sang on the Rick Wakeman albums Journey to the Centre of the Earth and The Myths and Legends of King Arthur and the Knights of the Round Table. His last appearance for many years was a 1977 live album by the Good Times Roll Band, led by bassist Tetsu Yamauchi (Samurai, Free, Faces).

Weathers and Headley Williams moved to Graham Bond’s band Magick, though only Weathers appears on the 1971 album We Put Our Magick On You. Amid recording commitments with Big Sleep, Weathers toured with the Grease Band. In early 1972, he joined Gentle Giant in time for their fourth album Octopus. He served as their drummer and malletist for the duration of their career (up through 1980).

Ryan did string arrangements on Caetano Veloso’s eponymous third album and joined Welsh mainstays Man for their 1972/73 albums Be Good to Yourself at Least Once a Day and Back Into the Future. After a mid-’70s spell in The Neutrons, he rejoined Man for their 1976 swan song The Welsh Connection. In 1978, he reunited with Weathers and Rees in the small-press rock one-off Faded Glory.

Ray Williams played on Pete Brown’s 1973 poetry album The “Not Forgotten” Association and The Neutrons’ 1975 second album Tales From the Blue Cocoons. As Taff Williams, he played on late ’70s albums by Ian Gomm, Digby Richards, and Bonnie Tyler.

Dogfeet
Dogfeet were an English hard-rock/psych band from Shrewsbury, Shropshire, that released a self-tit...
Johnnie Taylor
Johnnie Taylor (May 5, 1934 — May 31, 2000) was an American soul singer from Crawfordsville, Ark.,...
Giants
Giants were an American Latin-funk supergroup that came together in 1971 for an all-star jam. Reco...
Jasper
Jasper was an English blues-psych band that released the album Liberation on Spark Records in 1969. ...
The Boston Tea Party
The Boston Tea Party were an American psych-rock/garage band from Burbank, Calif., that released a...