Ethos was an American Midwest symphonic-rock band that released the 1976/77 albums Ardour and Open Up on Capitol. A collection of their early demos later appeared on the CD Relics.

They formed as Atlantis in Fort Wayne, Indiana, in 1973 when keyboardist Michael Ponczek, drummer Mark Richards, and singer/guitarist Wil Sharpe teamed with bassist Dan Owen. The members came from assorted local garage acts (The Senturies, The Herd) and grouped over a shared affinity for the nascent UK symphonic-rock sound (Yes, Genesis, King Crimson). They eventually changed their name to Ethos.

Ethos gained a Midwest following and served as a local liaison for Genesis, at the time a cult-level act with an audience suitable for flyover cities like Fort Wayne. A photo taken of Genesis during the US leg of their Lamb Lies Down on Broadway tour shows then-frontman Peter Gabriel wearing an Ethos t-shirt. 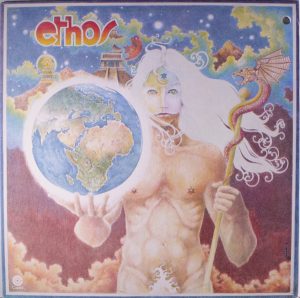 Ethos released their debut album, Ardour, in March 1976 on Capitol. It features eight originals, all composed by Sharpe, starting with a lyricized version of “Intrepid Traveler.” The material ranges from melodramatic rockers (“Space Brothers,” “Longdancer”) to oceany epics (“Atlanteans,” “The Dimension Man,” “E’Mocean”) with occasional bouts of folksiness (“Everyman”). On the riff-laden, stop/start “Spirit of Music,” Sharpe jettisons mid-’60s nostalgia from the standpoint of a daring, audacious rock deity.

Ethos promoted Ardour with shows across the US, including dates at Maine’s Bangor Auditorium (4/16/76) and the Santa Monica Civic Auditorium (6/11/76). They group-wrote a new epic, “Memories,” before Duncan Hammond left the band. That October, the four-piece Ethos entered Sound City, Los Angeles, to record their second album. 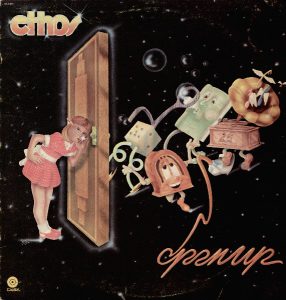 Ethos released their second album, Open Up, in 1977 on Capitol. Side A is bookended by the old staple “Pimp City” and the aforementioned “Memories.” Sharpe composed the bulk of side B: “The Players (of the Game),” “Marathon II,” and “Sedona.” The album wraps on the Stephenson/Richards epic “Close Your Eyes.” With Sharpe, they co-wrote “Start Anew.”

Stephenson stayed in LA, the base of ex-Yes guitarist Peter Banks and his partner, singer Sydney Foxx. He played on the third proposed album of their soul-rock band Empire, recorded in 1978/79. Along with the two prior Empire albums, it was finally released in the mid-’90s as Mark III on One Way Records.

Ardour first appeared on CD in 1993 courtesy of Capitol Japan, which reissued both Ethos titles in 2009. The 1973/74 recordings are compiled on the 62-minute CD Relics, released in 2000 by archivists Black Moon Productions.