Vincent was fresh off a three-album stint with Wallace Collection, a chamber-psych sextet that made two albums and a soundtrack in 1969/70. He recorded a solo album of chamber-folk, Metronomics, conceived as a promotional tie-in with Izarra liquor. It spawned the sweeping single “I Ain’t Got No Time,” co-written by flutist and singer Dirk Bogaert (Waterloo, Pazop, Cos, Abraxis).

Libert was a music theory major and pianist in local “off Broadway” productions when Vincent pitched the idea of a rock band with integrated strings. They commended rehearsals with guitarist Edouard Meinbach and the Italo–Belgian Malison brothers: Gino (bass) and Tony (drums). They jammed for a year and cut a demo at Cathy Studio, owned by French–Lebanese singer Marc Aryan.

Vincent, Libert, and the Malison’s crossed over to England, where they handed the demo to London-based Australian producer Dave Mackay, the producer of Wallace Collection’s Laughing Cavalier album and numerous Aussie acts, including Adelaide beat legends The Twilights. Mackay linked the band with ex-Twilights singer Glenn Shorrock, who was also residing in the UK after a recent stint in rustic-rockers Axiom. Another recruit, guitarist Brian Holloway, hailed from Melbourne garage rockers Somebody’s Image (with Russell Morris) and recently cut a single with Captain Australia and the Honky Tonk.

Esperanto doubled to 12 members with the integration of an Australasian female singing trio and a three-piece section of English string players: violinist Godfrey Salmon (Collegium Sagittarii), cellist Timothy Kraemer (Matthews Southern Comfort), and violist Tony Harris (Phillip Goodhand-Tait). The singers performed as Bones, comprised of Australians Brigette Du Doit, Janice Slater, and New Zealander Joy Yates. Some of these people met for the first time during their initial rehearsal at a farm in Cornwall.

Mackay took the band to Morgan Studios in London for their first session. They recorded two songs, “Publicity” and “Roses,” both composed by Vincent with lyrics by Libert. After talks with Polydor collapsed, they signed a three-album deal with A&M, which issued the two songs as a promo single in June 1973. 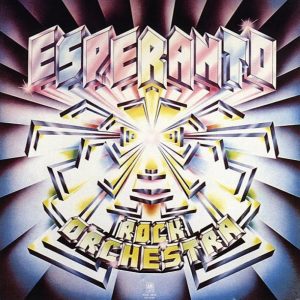 Esperanto released their first album, Rock Orchestra, in 1973 on A&M. Vincent composed six numbers: three with lyrics by Libert (“Never Again,” “Perhaps One Day,” “Roses”); three with words by Shorrock (“On Down the Road,” “City,” “Move Away”). Shorrock wrote “Statue of Liberty,” a song he’d later rerecord with the Little River Band.

Esperanto retreated to a castle in Wales, where they demoed material for a second album. The haunted atmosphere inspired a new track, “The Castle,” composed by Vincent with lyrics by Libert and Shorrock. They submitted an acetate to A&M, which rejected the material and asked Sinfield to offer them guidance. He agreed to produce the band’s next album.

Shorrock returned to Australia and surfaced the following year in the supergroup Little River Band, formed by ex-members of Aussie legends Mississippi and Zoot. In 1975, they released their self-titled debut album with a cover of “Statue of Liberty,” rendered in the style of Little Feat with horns, picked guitar, and a funkier rhythmic structure.

Sinfield enlisted singer Keith Christmas, a folk musician who released three albums between 1969 and 1972. His guitar work features on Shelagh McDonald‘s two albums and the second self-titled release by David Bowie. In early 1974, he was making a new album (his fourth) on Manticore, produced by Sinfield.

Holloway and the Bones singers performed on the second album but left by the time of its release, cutting Esperanto down to an octet. 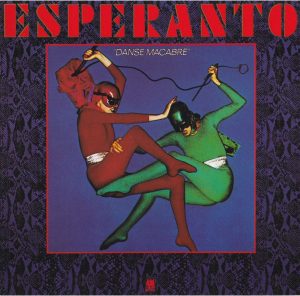 Esperanto released Danse Macabre in the spring of 1974 on A&M. The album contains “The Castle” and five additional proper songs: four composed by Vincent with help from Libert (“The Journey”), Sharrock (“The Prisoner”), and both (“The Cloister”). He collaborated with the Malisan brothers on “The Duel,” a vocalized wordless piece with a striking 6/8 cello theme. Holloway wrote “The Decision,” a funky mid-tempo cut with shivery strings and fuzzy guitar breaks.

Danse Macabre wraps with a title-sake postlude based on a theme by French Romantic composer Charles-Camille Saint-Saëns. On French copies, the track was withheld due to objections from the composer’s estate.

Sinfield declined the producer’s role on an upcoming Supertramp album (Crime of the Century) to work on Danse Macabre, which was engineered by Mike Cooper (Sweet Slag, Atomic Rooster) and Andy Hendriksen, whose list of credits includes albums by Arcadium (Breathe Awhile), Darryl Way’s Wolf, Fire, Jonesy, The Kinks (Arthur), Paul Brett Sage (self titled), Pink Fairies, Roxy Music (self titled), Stud, Woody Kern (Awful Disclosures of Maria Monk), Writing On the Wall (Power of the Picts), and English-translated versions of albums by the Italian bands PFM and Banco. For

Esperanto toured the album with support by the French band Magma, then promoting Köhntarkösz, their second A&M release and fourth album overall.

The original US release of Danse Macabre (cat# SP-3624) appeared in the A&M catalog just after Buddha and the Chocolate Box, the eighth studio album by Cat Stevens. In the UK, A&M issued “Danse Macabre” as a single, backed with “The Castle.”

Meanwhile, Esperanto placed “singers wanted” ads in Melody Maker that lassoed in Roger Meakin and Kim Moore, both fresh to the music scene. The two singers renewed the band’s octet configuration with Vincent, Libert, Kraemer, Salmon, and the Malisan’s. Harris — who played on Thin Lizzy‘s 1973 release Vagabonds of the Western World — left Esperanto for the New Symphonia, which backed Caravan on their 1974 live album. 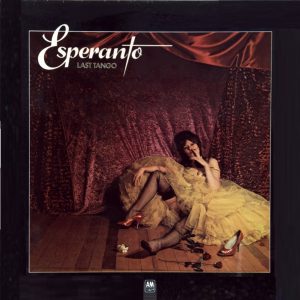 Esperanto’s third album, Last Tango, appeared in 1975 on A&M. Meakin wrote lyrics to four songs: the epic “Still Life” and the shorter numbers “Painted Lady,” “Obsession,” and the title track, the last with additional input from Libert. Vincent composed the music to all four songs, plus the 12-minute opus “The Rape,” co-credited to one Daniels.

The album opens with a 7:43 rendition of the much-covered Lennon–McCartney classic “Eleanor Rigby,” one of the first rock songs to incorporate chamber arrangements, as expanded on by Esperanto.

Last Tango sports cover art by designer Fabio Nicoli, who did 1975/76 covers for A&M releases by Gino Vannelli (Gist of the Gemini), Hudson–Ford, Hummingbird (We Can’t Go On Meeting Like This), Joan Armatrading, Nutz, and Supertramp (Crisis? What Crisis?). The photographer on the last of those, Paul Wakefield, also took the front and back cover shots on Last Tango, which shows a drunken woman in a yellow petticoat with a cigarette in hand; sunk down on the floor of an empty ballroom; garters exposed; one stockinged foot extended free from her red satin pumps. On back, she stares into the lens while held in dancer’s embrace by a slick-haired, tuxedo-clad gentleman.

This time, the group seemed to have found its musical and personnel equilibrium and the tour which followed was very successful. They played at numerous famous festivals, including Reading, Newcastle and Bilzen among other engagements. The band also had a residence at the Marquee: an Esperanto concert was automatically programmed every 10 to 15 days in the famous London club for several months. The European tours were also quite successful, with memorable concerts at the Paradiso in Amsterdam and at the Festival de Montreux (Switzerland), with PFM.

Although the band seemed to have found its cruising speed and success was obviously on the horizon (they were still in complete ignorance of sales figures), A&M did not renew their contract. Esperanto band members were flabbergasted as they knew their music had real appeal, particularly given the growing success of their concerts.

Gloria Gaynor
Gloria Gaynor (born Sept. 7, 1949) is an American soul singer from Newark, NJ. Discography: ...
Stephanie Mills
Stephanie Mills (born March 22, 1957) is an American R&B singer and actress who released her fir...
Bipsautru
Bipsautru were a Québécois folk-psych duo that self-released the album Chu Content... in 1978. M...
Kush
Kush were an Australian brass-rock/soul band that released the album Snow White and the Eight Stra...
Small Wonder
Small Wonder were a Canadian art-rock/pop band that released two albums on Columbia between 1976 ...