Epidermis was a German symphonic/art-rock band that released the album Genius of Original Force on Kerston in 1977. Two further albums appeared between 1982 and 1990.

Epidermis hailed from Wiesbaden, Hessen, with members who’d played together as early as 1966. By the mid-1970s, they’d built a repertoire of intricate, multi-movement pieces. 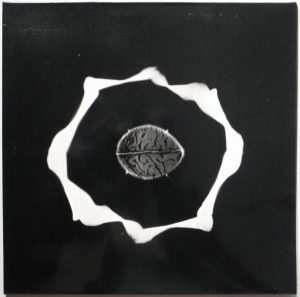 Genius of Original Force appeared in 1977 on small-press Kerston (GÄA, Proton 1). Each side consists of a 10/11-minute epic (“The Non Existent Surroundings of God,” the title-track) followed by a medium-length song (“A Riddle to Myself,” “Prime Origin”). Musical characteristics include contrapuntal arrangements, overlapping vocal lines, and flourishes of glockenspiel and recorder (played by two members). The album is often likened to mid-period Gentle Giant (The Power and the Glory, Free Hand).

Genius of Original Force was reissued in 1991 by specialists Music Is Intelligence with different cover art and a bonus track, “Feelings.” That same year, Epidermis issued the comeback CD Feel Me, also on MII.

In 2020, archivists Garden of Delights issued the first-recorded Epidermis album, June 1975. It contains five songs from the title-period, including the 20-minute “A Speck, a Dream.” The original bootleg disc (2010) contains nine additional tracks, including two versions of “Feelings.”

L'Orient d'Ô
L'Orient d'Ô were a Québécois symphonic-rock band that released a self-titled album on Capitol in ...
Richard Schneider Jr.
Richard Schneider Jr. is a German electro/space-rock musician who released two albums on Harvest/E...
Greg Sneddon
Greg Sneddon (born Jan. 25, 1954) is an Australian keyboardist, composer, and arranger who release...
Kunstkopfindianer
Kunstkopfindianer were a multi-national jazz-rock supergroup that released one album on MPS in 197...
Brides of Funkenstein
Brides of Funkenstein were an American soul-funk group from Detroit that released two albums on A...