Elias Hulk was an English hard-rock-psych band from Bournemouth, Dorset, that released the album Unchained on Young Blood in 1970.

Elias Hulk was instigated in 1968 by Bournemouth teenagers Peter Grenville ‘Gren’ Fraser (guitar) and James Haines (bass). After their stint in the unrecorded pop-psych act Free Love, they formed The Parkers, a blues-rock duo that opened a free festival in La Harve, France. Upon their return, they enlisted singer Pete Thorpe, drummer Bernard James, and lead guitarist Neil Tatum.

Thorpe once fronted the Harvey Wells Soul Band, an unrecorded R&B ballroom act that opened for Status Quo, the Small Faces, Spooky Tooth, and The Nice.

As the new five piece rehearsed, they developed a set of originals that echoed the blues-psych heaviness trends on the UK scene. To convey the unbridled aggression of their sound, they named themselves The Hulk, then placed Elias (Hebrew for “the Lord is God”) in lieu of the definite article to avoid a lawsuit from Marvel Comics, creators of The Incredible Hulk. 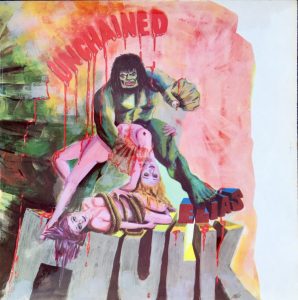 Unchained features eight songs, mostly in the three-to-four-minute range, including “Anthology of Dreams,” “Ain’t Got You,” “Yesterday’s Trip,” and “Nightmare.” Gren, credited as Granville Frazer on the sleeve, co-wrote all but one of the songs. The cover, drawn by artist Peter Lee, depicts a fist-clenching Hulk-like creature hovering over a rocky precipice with two scantily clad female captives. The album sold best in Germany, where Lee’s art was swapped with a blue-tinted photo collage of the band members.

“Yesterday’s Trip” initially glides on an up-slide riff, flanked with pummeling drumrolls. The song undergoes a sequence of rhythmic mutations, dominated throughout by lyrical fretwork. “Ain’t Got You” explodes from slumber with lava-like guitars over rocky rhythmic elements. Stylistically, Unchained connects dots between the thunderous end of freakbeat (Art, The Attack), the guttural core of blues rock (Steamhammer, Chicken Shack), and booming grandeur of newer hard rock (T2, High Tide).