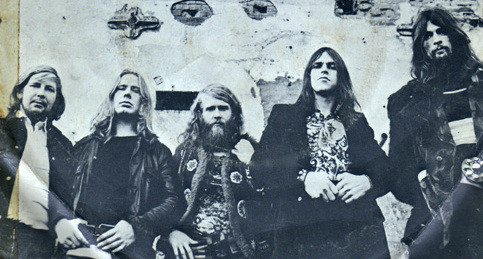 Ekseption was a Dutch classical/jazz-rock band from Haarlem, Noord-Holland, originally formed in 1958 as The Jokers. Between 1969 and 1976, the band released nine albums on Philips.

Ekseption had its roots in The Jokers, a school covers band formed in 1958 in Haarlem by bassist Hans Alta, drummer Tim Griek, trumpeter Rein van den Broek, and saxophonist Huib van Kampen. In 1965, they renamed themselves The Incrowd (after the Ramsey Lewis song), but soon discovered this name had been taken by an English beat group (the precursor to Tomorrow). They made their vinyl debut with Ekseption at ABC, a three-song maxi-single released as ‘Jazz and Beatformation the Ekseption’ on RCS.

In 1968, Ekseption won first prize at the Loosdrechtse Jazz Concours and got signed to Phonogram. Alta and Griek cleared out for bassist Cor Dekker and drummer Peter De Leeuwe.

Giles Giles and Fripp
Giles Giles and Fripp were an English chamber-pop/psych combo from Bournemouth, Dorset, that issue...
Amon Düül II
Amon Düül II was a German psych-rock band that released six studio albums and a live set on Libert...
Creative Source
Creative Source were an American soul group from Los Angeles. Members: Donald Lee Wyatt [aka Don...
Iguana
Iguana was an English brass-rock/funk band from Southampton that released a self-titled album on P...
Boffalongo
Boffalongo were an American psych-rock band from NYC that released two albums on United Artists b...