Eire Apparent was an Irish psychedelic pop band that made the album Sunrise, produced by Jimi Hendrix and released in 1969 on Buddah Records.

Eire Apparent had their roots in Tony & the Telstars, a Belfast beat group with bassist Chris Stewart and drummer Davy Lutton. As members passed to local rivals The Wheels and German beatsters The Stellas (Stewart’s temporary vocation), guitarist Ernie Graham came aboard.

The Telstars changed their name to The People and recorded two songs — “I’m With You” and Buddy Holly’s “Well… All Right” (later covered by Blind Faith) — for the 1966 Ember Records comp Ireland’s Greatest Sounds: Five Top Groups From Belfast’s Maritime Club. In 1967, the lineup of Graham, Stewart, and Lutton added guitarist Henry McCullough, a Portstewart native with a background in showbands.

The People moved to London, where they signed with the management team of Mike Jeffery and (ex-Animal) Chas Chandler. At the suggestion of Jeffery’s wife, the band renamed itself Eire Apparent. (Eire is the Irish Gaelic name for Ireland.) They signed with Track Records, a label recently established by The Who‘s management for post-psych talent, including the Crazy World of Arthur Brown and Chandler’s other client, Jimi Hendrix.

In January 1968, Eire Apparent released their debut single, “Follow Me,” backed with the group-original “Here I Go Again.” The a-side, written by the team behind Flowerpot Men, was also recorded and released that February as a b-side by The Fruit Machine, a precursor to Rare Bird.

Chandler assigned Eire Apparent as the opening act on a Feb–March North American tour with The Animals. During a stop in Vancouver, McCullough was detained and deported to Ireland for marijuana possession. The band hired English guitarist Mick Cox and did further North American shows with Soft Machine and the Jimi Hendrix Experience.

Eire Apparent entered New York’s Record Plant with Hendrix and cut their second single, the group originals “Let Me Stay” and “Yes I Need Someone,” released in August 1968 on Buddah. They recorded their album in Los Angeles during October 1968, once again with Hendrix as producer.

The completed album sat in the can for seven months. In the meantime, Cox cleared out for guitarist David “Tiger” Taylor, a one-time member of The People. He co-wrote Eire Apparent’s third a-side, “Rock ‘N’ Roll Band,” released in January 1969 on Buddah (b/w “Yes I Need Someone”). The Taylor lineup toured Europe that April with Hendrix. 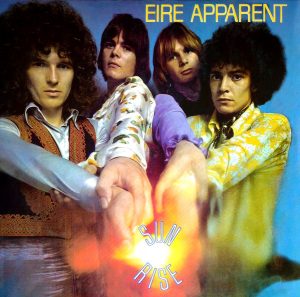 Eire Apparent released Sunrise in May 1969 on Buddah (UK, US, Germany, Argentina, South Africa). It features five originals per side, including three apiece by Graham (“Got to Get Away,” “Someone Is Sure to (Want You),” “Magic Carpet”) and Cox (“Mr. Guy Fawkes,” “Morning Glory,” “Captive In the Sun”). Stewart contributed “The Clown” and co-wrote the closing track, “1026,” with Graham. The album also includes both sides of the first Buddah single.

Hendrix produced Sunrise and played on several tracks, including “Yes I Need Someone” and “The Clown.” Select numbers feature uncredited cameos by Softs drummer/singer Robert Wyatt and Experience members Mitch Mitchell and Noel Redding (then also in Fat Mattress).

The Sunrise cover, which shows the four members packed in front of a small spark of light, was taken by American photographer Ron Raffaelli, whose photography is also seen on albums by Free (Free),  The Crusaders, The Rolling Stones, Martha Reeves & The Vandellas, The Sylvers, and the 1972 one-off by Redding’s post-Experience power trio Road.

Eire Apparent cut a session for the April 20, 1969, installment of Top Gear, hosted by BBC Radio 1 DJ John Peel. Their set featured three songs: “Yes I Need Someone” and covers of Bob Dylan (“Highway 61 Revisited”) and Them (“Gloria”). Guitarist Peter Tolson played in lieu of Taylor on this session.

By the time Sunrise hit shelves, Eire Apparent were planning a second album with new guitarist Steve Jolly (ex-Sam Apple Pie). Wyatt was tapped as producer on the project, which never came to fruition. The band ground to a halt in May 1970.

Graham cut a singer/songwriter solo album in 1971 on Liberty. He joined rustic rockers Help Yourself for their 1972 release Strange Affair. His final band was funk rockers Clancy, which released two albums on Warner Bros. in 1975/76. In 1978, he cut a one-off single on Stiff Records: the Thin Lizzy cover “Romeo and the Lonely Girl,” backed with the original “Only Time Will Tell,” produced by ex-Pink Fairies guitarist Larry Wallis.

Lutton played on the two 1972/73 Epic albums by Ellis, formed by ex-Love Affair singer Steve Ellis and former Dantalian’s Chariot keyboardist Zoot Money. He then joined the 1975–77 lineup of T. Rex and played on late-decade albums by Wreckless Eric and Chris Spedding.

Stewart played on 1972/73 singer/songwriter albums by Tim Hardin, Gerry Lockran, Tony Kelly, and ex-Justine frontwoman Laurie Styvers. He joined the reformed Spooky Tooth for their 1973 albums Witness and You Broke My Heart So…I Busted Your Jaw. In 1974, he appeared on titles by Andy Fairweather-Low, Joe Cocker, and Jim Capaldi. After playing on the 1975 release Funkist by singer/drummer Bobby Harrison (Procol Harum, Freedom, Snafu), Stewart began a three-album stint behind Frankie Miller. He also notched credits with Ronnie Lane, Graham Bonnet, and John Martyn.

McCullough played on Cocker’s first two albums (both 1969) and joined Spooky Tooth for their 1970 fourth album The Last Puff. He joined Paul McCartney and Wings for a clutch of 1972 singles (“Give Ireland Back to the Irish,” “C Moon”) and the 1973 album Red Rose Speedway. After backing American singer Viola Wills, McCullough interacted with Stewart on 1974/75 titles by Harrison, Miller, and Fairweather-Low. In 1975, McCullough debuted as a solo artist with the album Mind Your Own Business! on Dark Horse Records. Later that decade, he played in Roy Harper‘s backing band.

Cox cut two 1969 CBS singles in the pop-psych Magnet. In 1973, he interacted with Stewart on the Kelly and Styvers titles and cut one album on Capitol as the namesake of the Mick Cox Band, which also featured Stewart. Cox later surfaced on two ’80s-era albums by Van Morrison.

Taylor formed the folk-psych band Anno Domini, which released the album On This New Day on Deram in 1971. Two members of that band, brothers John Evan-Jones and Trevor “Gypsy” Jones, formed symphonic-rockers Jonesy.

Tolson joined The Pretty Things in time for their 1972 release Freeway Madness and stayed through their 1974/75 albums Silk Torpedo and Savage Eye. He partook in their 1980 reunion and played on the solo albums of late-period Pretties guitarist Jack Green.

Eire Apparent’s final guitarist, Steve Jolly, appeared on the 1972 Vertigo release Freedom Is More Than a Word, the fifth and final album by the Procol Harum-spinoff Freedom.