Egg was an English jazz-psych trio that released the 1970/71 Deram albums Egg and The Polite Force. After keyboardist Dave Stewart signed to Virgin with Hatfield and the North, he reunited Egg for the 1974 album The Civil Surface. Stewart later played in National Health and Bruford.

Egg hatched from Uriel, formed in 1967 by guitarist Steve Hillage, bassist Mont Campbell, drummer Clive Brooks, and organist Dave Stewart. After Hillage left for college, Uriel signed as Egg to Decca in 1969. Soon after, they were asked to reunite Uriel by renegade label Evolution. Reteamed with Hillage, they recorded a self-titled album under the incognito name Arzachel.

In late 1969, the trio of Stewart, Brooks, and Campbell recorded their first album as Egg. It was preceded by their only single, “Seven Is a Jolly Good Time,” a hopping singalong in 7/8 with a jerky bridge in 5/8. The b-side, “You Are All Princes,” is a swirling organ waltz with pounding drums and Campbell’s Gould-like vocals, replete with a harpsichord break. 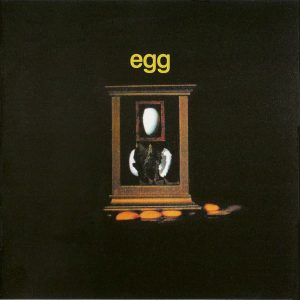 Egg released their self-titled debut album on Decca-subsidiary Deram in March 1970. Side one features three group-written numbers — “While Growing My Hair,” “I Will Be Absorbed,” and “The Song of McGillicudie the Pusillanimous” — surrounded by interludes and a band arrangement of Bach’s “Fugue in D Minor.” On the one-minute side closer “Boilk,” flute-tone Mellotron keys fade into a sped-up tape of backwards brush drums and plucked piano strings.

Side two consists of Symphony No. 2, comprised of four thematic movements and a section of white noise titled “Blane.” The third movement, which appropriates “Danse des Adolescents” from Igor Stravinsky’s Rite of Spring, was quickly pulled from the album due to copyright.

Egg was self-produced by the trio at Lansdowne and Trident Studios with engineer Peter Gallen, a technical hand on 1970/71 albums by Colosseum and Uriah Heep; he later produced Osibisa. “While Growing My Hair” was engineered by studio up-and-comer Roy Thomas Baker, who recently earned his first credits on albums by Chicken Shack, The Deviants, Savoy Brown, and Ten Years After.

Egg appeared as DN 14 in Deram’s Nova series, between titles by Pacific Drift and Black Cat Bones. All three artists appear — along with labelmates Aardvark, Bill Fay, Galliard, and Jan Dukes de Grey — on the 1970 comp Nova Sampler, which contains “The Song of McGillicudie the Pusillanimous Or (Don’t Worry James, Your Socks Are Hanging In the Coal Cellar With Thomas).”

The album was released in the UK (stereo and mono), US, Canada, Germany, and Venezuela. Only the original UK stereo version contains “Movement 3.” Later CD issues of Egg on Eclectic Discs (UK, 2004) and Esoteric Recordings (Russia, 2008) restore the track and add both sides of the 1969 single.

Egg released their second Deram album, The Polite Force, first as a test press in November 1970, then as a general release in April 1971 (UK, North America, Germany, Venezuela). Side one contains two group-composed numbers and an improvised studio experiment: 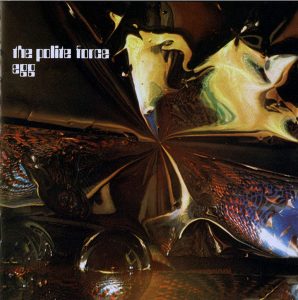 The Polite Force was produced at Morgan Studios, Willesden, by Neil Slaven, who also produced Deram titles by Henry Lowther, the Keef Hartley Band, and Miller Anderson. Slaven — pictured on the back alongside the member pics — wrote the liner notes, comprised largely of quotes by others, including Melody Maker journalist Richard Williams, who referred to Egg as “super-efficient rock musicians with the kind of enquiring minds which make the current scene so exciting.”

The engineer on The Polite Force, Robin Black, was a tech hand on 1970/71 albums by Edwards Hand, Gerry Rafferty (Can I Have My Money Back?), Jethro Tull (Benefit), Pink Floyd (Meddle), Red Dirt, Stone the Crows, Supertramp (Supertramp), and T2 (It’ll All Work Out in Boomland).

Egg signed with the Groundhogs‘ management and upped their touring schedule during 1971. They wrote material for a new album but Deram wouldn’t green-light any further recordings by the band.

Later in 1971, Stewart teamed with drummer Chris Cutler to launch the Ottawa Music Co., a collective of avant-garde musicians. The two met when Egg played a double-bill with Comus, which featured bassoonist Lindsay Cooper. Within weeks, Cutler joined Henry Cow and brought them into the fold. The OMC played three concerts with participation from more than 15 performers, including all of Egg, Cow, and singer Barbara Gaskin, then of Spirogyra. The setlist featured a new Campbell piece, “Enneagram.”

Egg disbanded in early 1972. Campbell enrolled in the Royal College of Music, where he studied composition and French horn. Brooks joined the Groundhogs for the 1972–74 albums Hogwash and Solid.

Stewart joined Hillage’s band, Khan, formed with bassist Nick Greenwood, formerly of the Crazy World of Arthur Brown. Their album Space Shanty appeared in 1972 on Deram. Stewart then joined Hatfield and the North, formed by ex-members of Delivery, Gong, and Matching Mole. They signed with Virgin and released a self-titled album in 1974.

As Hatfield prepared a followup, Virgin agreed to let Stewart record an album of stockpiled material with his old band. Brooks and Campbell returned for the studio-only project. 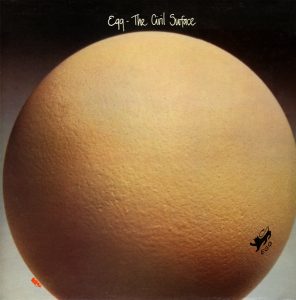 Egg released their third album, The Civil Surface, in December 1974 on Caroline (UK), a division of Virgin. Side one is framed by two long pieces credited to Campbell and Stewart: “Germ Patrol” (8:31) and “Enneagram” (9:07). The latter — oft-cited as their most involved piece — opens with dense staccato interplay and passes through numerous sections (one for each personality on the Enneagram), including parts where taut keyboards collide with loose fuzz bass, followed by quiet moments of tonal echo and misty ride cymbal. It’s the only self-contained piece on the album.

“Germ Patrol” shuffles through a metronomic intro; an ostinato-bound sequence of treated organ sounds (wah-wah, fuzz); and a stately ensemblic section of martial percussion and wind instruments, played by Cow members Lindsay (bassoon) and Tim Hodgkinson (clarinet). They also guest on side two’s “Nearch,” a minimalist piece comprised of a two-note wind motif over a lurching, stop/start rhythmic pattern in F#.

The centerpiece of side two, “Wring Out the Ground (Loosely Now),” bursts in with a swelling chorus in 10/4. Campbell repeats the title numerous times over an arching, heavy organ riff based in G. The mid-section cuts to speedy tempos and fluid runs with a cameo by Hillage.

Barbara appears with fellow Northettes Amanda Parsons and Ann Rosenthal on “Prelude,” where they interject wordless bits amid a series of dark, quiet, randomized organ progressions.

Campbell employed freelance wind players — including clarinetist Maurice Cambridge of The Armada Orchestra — for his episodes of “Wind Quartet” (I and II), recorded without Brooks or Stewart. Both episodes display his skills on French horn and interest in chamber composition.

Egg self-produced The Civil Surface at Saturn Studios, Worthing, in August 1974 with engineers Dave Ruffell and John Purdy, who would also work on the second Hatfield album, The Rotter’s Club, recorded during the first two months of 1975. Percussionist Jeremy Baines — credited with pixiephone (glockenspiel) on the debut Cow and Hatfield albums — is listed here as playing the germophone.

Virgin in-house designer Trevor Key designed the cover to Civil Surface. It shows the bottom of a yellow egg, stamped with a black cat and circled by a tiny red van. Key also designed covers for the first two albums by Mike Oldfield (Tubular Bells, Hergest Ridge) and 1974/75 titles by Mandalaband and Robin Trower. He later did covers for the Sex Pistols, X-Ray Spex, OMD, Phil Collins, and New Order.

Amanda earned her only visual credit with the back cover of Civil Surface: an assortment of studio shots and stripes with hand-written credits on a yellow background.

Stewart made one more album with Hatfield, then broke off with guitarist Phil Miller and formed National Health, which initially featured Campbell plus keyboardist Alan Gowen (Gilgamesh) and drummer Bill Bruford (Yes, King Crimson). The latter three left by the spring of 1977, when Health recorded their first of three albums. Concurrently, Stewart doubled in Bill’s band Bruford. In the early ’80s, he and Barbara charted as a synthpop duo.

Campbell retreated from the music scene after leaving National Health. He formed the chamber quartet Mozaic, but only for low-key events.

Brooks joined hard-rockers Liar, which released the albums Straight From the Hip (1977, Decca) and Set the World on Fire (1978, Bearsville).

Airrace
Airrace were an English hard-rock band from London that released the album Shaft of Light on Atlan...
The Independents
The Independents were an American soul group from Chicago. Members: Marvin Yancy, Charles Jackso...
The Sex Pistols
The Sex Pistols were an English rock band that spearheaded the London punk scene in the summer of 19...
Andy Pratt
Andy Pratt (born Jan. 25 1947) is an American singer/songwriter from Boston. Discography: R...
Sniff ‘n’ the Tears
Sniff ‘n’ the Tears were an English adult-oriented rock band from London that released four albums...