Easy Street was an English pop-rock trio that issued two albums on Polydor/Capricorn: Easy Street (1976) and Under the Glass (1977).

In 1974, they released the album Nicol & Marsh’s Easy Street on CBS. It features ten originals, including Nicol’s “Sinking Down,” a slow, swaying ballad with crisp saxophone and shivering strings; and the joint-written skiffle “Midnight Cat.” Guests on the album include steel guitarist BJ Cole (ex-Cochise), the Kokomo singers, and American-born multi-instrumentalist Pete Zorn, who plays banjo on two tracks.

Zorn hailed from the folk trio Fishbaugh, Fishbaugh & Zorn, which issued a self-titled album in 1972 on CBS. He would serve as a fourth-wheel on the duo’s subsequent project Easy Street, a trio named after the 1974 album with drummer Richard James Burgess. Meanwhile, Zorn played on 1975/76 albums by Starry Eyed and Laughing and Catherine Howe.

In 1975, Zorn appeared with Easy Street on the ITV talent show New Faces, where they placed second behind ventriloquist Roger de Courcey and his bear Nookie.

Easy Street signed to Polydor for the UK, Europe, and Canada. In the US, they were one of the few non-American acts signed to Capricorn, a label established for the Allman Brothers Band that hosted a mix of Southern rock, hard rock, and soul-funk (Captain Beyond, Grinderswitch, Hydra, Marshall Tucker Band, Maxayn, Wet Willie, White Witch). 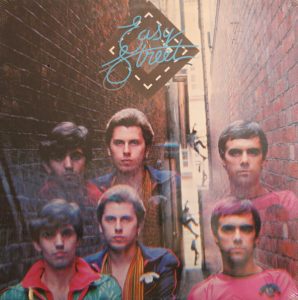 Easy Street released their self-titled debut album in 1976. It features 11 songs that mix West coast harmony pop with Anglo rock and skiffle. The songwriting credits are split between Nicol (“Things I’ve Done Before,” “Wait for Summer”), Marsh (“Part of Me”), both (“Lazy Dog Shandy,” “What Have We Become”), and all three (“Illogical Love,” “Blame the Love,” “Easy Street”). Zorn helped the pair on “Feels Like Heaven” and served as a fourth-writer on the group compositions “Shadows On the Wall” and “I’ve Been Lovin’ You.”

“Feels Like Heaven” opens Easy Street as an exuberant strum-along of crisp acoustics, festive organ, and buoyant harmonies. “Illogical Love” sets lyrics of romantic duplicity to a skiffle arrangement with street-corner harmonies. “Blame the Love” features crisp, sumptuous chords and a soaring chorus. “Part of Me” is a slow, quiet, aching confessional with tender piano and echoing vibes. The album climaxes with the raw, explosive “What Have We Become.”

Easy Street was co-produced between the band and Mike Stone, who also worked on Fantasy Girls, the 1976 debut album by Charlie. Three tracks (“Shadows On the Wall,” “I’ve Been Lovin’ You,” “Wait for Summer”) were co-produced by Dennis Weinreich, who also worked on 1976 albums by Alain Renaud, Hummingbird (We Can’t Go On Meeting Like This), Michael Mantler (The Hapless Child), and the Real Thing.

Musical guests on Easy Street include Kiwi bassist Jim Hall, saxophonist John Walters, trombonist Peter Thoms, and keyboardists Christopher Heaton and Rod Argent, who plays on “Feels Like Heaven” (organ) and “Part of Me” (piano). (Heaton and Thoms would join Burgess in Landscape.) Zorn plays assorted instruments on “Wait for Summer” and “What Have We Become.”

Easy Street is housed in a single sleeve with a double-vision image of the trio, colorfully clad in a narrow alley. Their friend and hairstylist, John Frieda, is seen at a distance stunt-straddling the parallel walls. The back cover has a shaded, somber shot of the trio, black-shirted with autographs. The art director, Norman Moore, is also credited on 1976 albums by Alquin, Heatwave (Too Hot to Handle), and Split Enz (Mental Notes). 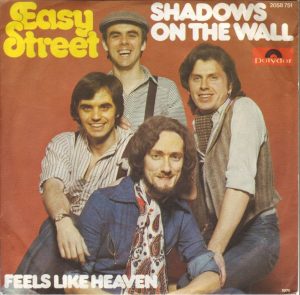 Polydor issued three songs from the album as singles; Capricorn issued two. Stateside, the subdued, nostalgic “I’ve Been Lovin’ You” reached No. 81 on the U.S. Billboard Hot 100 and No. 79 on the Cash Box Top 100 (7/31/76). In Germany, two Zorn co-writes (“Shadows On the Wall” and “Feels Like Heaven”) appeared on 7″ in a picture sleeve that includes him in the group.

“Feels Like Heaven” appears on the 1976 German Polydor comp Hit Sensation – 20 Original Hits along with cuts by Barbara Dickson, Bee Gees, Billy Ocean, Eric Clapton, Golden Earring, The Hollies, James Brown, and the Walker Brothers. The song also appears on the 1977 label comp Good for Nothing – The Sounds Album, Vol 1 with tracks by the Atlanta Rhythm Section, Doctors of Madness, The Jam, Pat Travers, Paice Ashton Lord, and Rainbow. 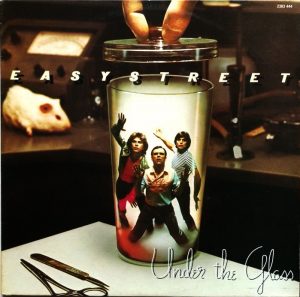 Easy Street released their second album, Under the Glass, in 1977 on Polydor (UK, France, Canada, Japan) and Capricorn (US). It features a two-part medley by Nicol (“Look for the Sun/Only a Fool”), one Nicol–Marsh cut (“Flying”), two Marsh–Burgess numbers (“Is This Real,” “I See You”), and five three-way compositions: “How Can You Take It So Hard,” “Rely On You,” “What Does the World Know,” “Strange Change,” and “The Night of the 11th.”

The opener, “Flying,” unveils a newfound knack for Little Feat-style swamp funk, while the harmony-rich “Is This Real” picks up musically where “I’ve Been Lovin’ You” left off.

“Strange Change” is a galloping pep-tune with gritty organ and tongue-in-cheek lyrics. The evolving piano/harmony layers of “I See You” display a growing mastery of longer song-form.

On the album’s centerpiece, “What Does the World Know,” ivory and strings softly tap into minor-key modalities, which gradually weave into the melodramatic backdrop of the chorus: a poignant tour de force of multi-tracked harmonies.

Polydor issued “Flying” as a single in April 1977, backed with the prior album’s “Blame the Love.” That July, “Rely on You” backed the non-album Nicol–Marsh a-side “Love at Breakfast.”

During 1977, Richard Burgess also played on albums by Charlie (No Second Chance) and Tony Visconti (Visconti’s Inventory). Before the year was out, he drifted over to jazz-rockers Landscape, which debuted with the EP U2XME1X2MUCH. After two further releases in the jazz-funk vein, they embraced electro/art-pop on their 1981 multi-media release From the Tea-rooms of Mars… to the Hell-holes of Uranus. Burgess also produced the first two albums by Spandau Ballet: Journeys to Glory and Diamond. As a denizen of the Blitz scene, he coined the term New Romantic.

Ken Nicol and Peter Marsh reverted to a duo for the 1978 Polydor release Nicol & Marsh. Afterward, Marsh teamed with drummer Stevie Corduner (Byzantium, Nasty Pop) and Landscape bassist Andy Pask in the new wave combo Twist, which released the 1979 Polydor album This Is Your Life. Following a stint with Vangelis, he formed Blanket of Secrecy, which issued the prized 1982 album Ears Have Walls.

Nicol launched a solo career and surfaced years later in the Albion Band, a revolving-door folk institution led by Ashley Hutchings, a co-founder of Fairport Convention and Steeleye Span.

Pete Zorn formed Tax Loss, which issued two singles and the 1979 album Hey Mister Record Man on Logo. As a side project, they made the 1978 novelty single “Car 67” under the name Driver 67. Burgess drummed on the single and appeared with the group on Top of the Pops. Zorn also played on 1978–82 albums by Charlie (Lines), Chris Rainbow, Gerry Rafferty, Richard & Linda Thompson, and Shona Laing.

In 2009, Easy Street and Under the Glass were paired on a single CD by archivists Renaissance Records.