Eardance were an American art-rock band from Chicago that released the album Seek Opposites on self-press Touch Records in 1982. The album is one of the earliest to feature extensive use of the Chapman Stick, played by multi-instrumentalist/bandleader Jim Jacobsen, who later became a soundtrack composer. 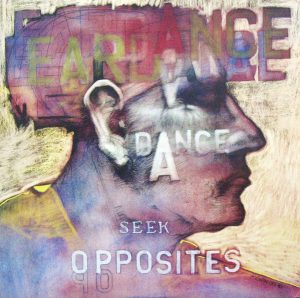 Featuring nine Jacobsen originals, Seek Opposites displays harmonic, arpeggiated interplay around angular basslines. On the galloping “Nada Fuera,” bass notes angle between B-flat and C amid brisk, torrential percussion and ivory. On “Words Gone By,” a 5/4 bass ostinato in B is decorated with sparkly xylophone/piano interplay. The intensity soon breaks for a quiet chant with loud-yet-parse downbeats in G minor.

“Russian Dragon” is anchored by a one-six-seven-four progression in E-flat as rhythmic bars alternate between kick/tom fills and cymbal-laden dropouts. The track eventually breaks for a rapidfire percussion/piano section in B-flat, marked by fuzzy Chapman runs that surrender to snare-pummeled, howling Fripp-tone guitar sustains. The whip-cracking “Movers and Shakers” is characterized by jumbled harmonies, snaky fretwork, and bubbling percussion. As the song approaches its climax, everything overlays amid a throbbing Chapman bassline.

Each side of the album starts with a number that brings the band’s vocal complexities to the fore, as heard on the complementary, harmonized multi-layers of “Jaded.” On the flipside, “Pawn Shop” features airy Byrne-like vocals by Russell Berger over a loopy mid-tempo flanked with assorted sound baubles and reggaefied interjections.

Jacobsen’s liberal use of the Chapman invites comparisons to contemporaneous King Crimson (Discipline/Beat) while the percussive fills of Dixie Treichel and Homero Cerón evoke the more rhythmically convoluted numbers on the album Remain In Light by Talking Heads.

Eardance continued for another five years without producing any more music. Jacobsen has issued two solo albums: the 1990 New Age disc The Messenger on Narada Mystique and an undated collection of soundtrack bits titled Rock Currents on Media Music the Professional. During the late 1990s, he collaborated multiple times with the band Eels.