Duncan Browne (March 25, 1947 — May 28, 1993) was an English singer/songwriter who released the album Give Me Take You on Immediate in 1968, followed by a self-titled album on RAK in 1973. After a one-album stint in the symphonic/art-pop trio Metro, he released the 1978/79 albums The Wild Places and Streets of Fire on Logo/Sire.

He was born Duncan John Browne on March 25, 1947, the only child of Air Commodore C. D. A. Browne. As a schoolboy, he excelled in acting and mastered the clarinet. Though he aspired to follow his father into the Royal Air Force, he was declined on physical grounds. He then entered the London Academy of Music and Dramatic Art, where he studied Composition and Harmony under conductor/composer Anthony Bowles.

By 1967, Browne was an aspiring actor and accomplished classical guitarist. With his then girlfriend and a third wheel, he formed the folk trio Lorel, which was signed to Immediate Records by music mogul Andrew Loog Oldham (Rolling Stones, Chris Farlowe, Twice as Much). They cut a single, produced by singer Mike D’Abo (Manfred Mann), then promptly disbanded. Oldham shelved the single and offered to produce an album of Browne’s own material. 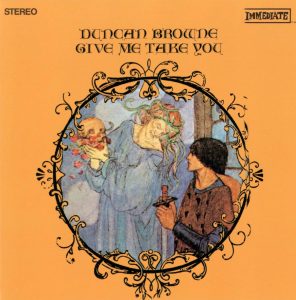 The resulting product, Give Me Take You, was released on Immediate in 1968. Side one features seven songs, including “Dwarf in a Tree (A Cautionary Tale),” “Ninepence Worth of Walking,” and the title-track. The flipside features five numbers, including two — “On the Bombsite” and “Alfred Bell” — that were paired on 7″. Another track, “The Death of Neil,” appeared on the label-roster roundup Immediate Lets You In. Browne wrote all the songs in collaboration with poet/lyricist David Bretton, a classmate from the London Academy.

The cover art was illustrated by Paul Weldon of the Canadian design company The Stanford Group. (Weldon, a musician in his own right, would eventually find chart success in Toronto popsters Edward Bear.) Musically, Give Me Take You combines psychedelic folk and baroque pop in a similar manner to concurrent albums by Al Stewart (Bed Sitter Images), Nick Garrie (The Nightmare of J. B. Stanislas), and Donovan (A Gift From a Flower to a Garden).

In 1969, Browne did choral arrangements for The Nice on their recording of Tim Hardin’s “Hang On to a Dream,” included on their eponymous third album.