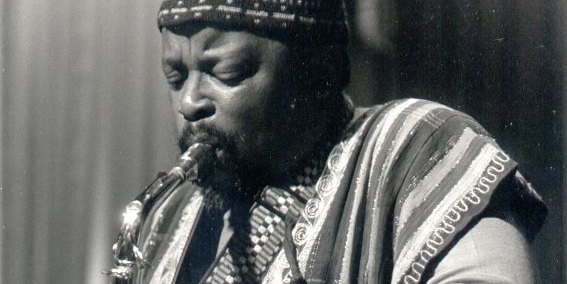 Dudu Pukwana (July 18, 1938 — June 30, 1990) was a South African jazz saxist and composer who rose to prominence during the mid-1960s as a member of the Blue Notes, one of the first Cape Town acts to court an international audience. Under the leadership of pianist Chris McGregor, the band morphed into the Brotherhood of Breath, which issued three albums between 1971 and 1974. Concurrently, Pukwana played with fellow BoB’s Louis Moholo (drums) and Mongezi Feza (trumpet) in the Afro-rock act Assagai.

Pukwana’s first albums as a leader were cut with his band Spears — aka Spear — which also included Feza, Moholo, and bassist Harry Miller. In 1969, the band issued its self-titled debut on Quality Records. Five years later, the band’s popular second effort, In the Townships, appeared on Virgin-subsidiary Caroline.

In 1975, Pukwana headed the final Spear album, this time with John Stevens on drums. This turned out to be the final album for Mongezi Feza, who died later that year from pneumonia. In tribute to his fallen bandmate, Pukwana regrouped the Blue Notes for the 1976 double-album Blue Notes for Mongezi.

Dudu Pukwana passed away from liver failure in June 1990, just four weeks after the death of his Blue Notes/Brotherhood bandmate Chris McGregor.