Driver were a Canadian hard-rock trio that released the album No Accident on A&M in 1977.

Prior to forming Driver, bassist Dennis Coats had notched songwriting credits on albums by Doyle Holly, The Original Caste, and Appleshine. 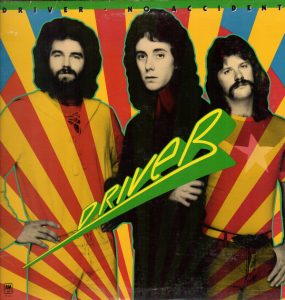 Driver issued one album, No Accident, in 1977 on A&M (Canada, US, Japan). It features 10 originals, including “Boxful of Love” and the two sides of their first single: “(I’ve Been Lookin’ For) a New Way to Say I Love You” and “Bring it to Me.” The opening track, “Love and a Man,” was released as their second single. The album was produced by David Anderle (Rhinoceros, Rita Coolidge, Mother Hen, Ozark Mountain Daredevils, Chris De Burgh, Annabel Lamb).

Coats subsequently had his songs recorded by Mickey Gilley and Dukes of Hazard star John Schneider. Driver guitarist/vocalist Peter Glindeman produced the 1985 EP One of a Kind by hard-rockers Prototype.