Dire Straits was an English rustic-rock band from Deptford that released six studio albums and a live disc on Vertigo/Warner Bros. between 1978 and 1991.

Dire Straits was formed in 1977 London by guitarist/singer Mark Knopfler (b. 1949) and his guitarist brother David Knopfler (b. 1952). The pair were born in Glasgow, Scotland, but raised in Newcastle upon Tyne. The lineup was rounded by bassist John Illsley and veteran drummer Pick Withers (Spring, Prelude, Shortwaveband, Magna Carta). Withers knew Mark from their mutual post-album stint with pub-rockers Brewers Droop circa 1973. Musically, the new band drew heavily from the Delta blues and the work of singer/songwriter JJ Cale.

The band initially called itself Café Racers before choosing Dire Straits at the suggestion of Lindisfarne guitarist Simon Cowe. A three-song demo was handed to DJ Charlie Gillett, who put the track “Sultans of Swing” into high rotation on his BBC Radio program Honky Tonk. The song’s popularity won Straits a contract with Vertigo. A re-recorded version was issued in May 1978 as their debut single (UK #8, US #4). 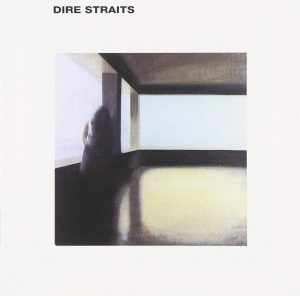 Dire Straits released their self-titled debut album in October 1978. It features “Sultans of Swing” and eight other originals, including “In the Gallery,” “Wild West End,” “Setting Me Up,” and “Six Blade Knife.” The album’s first two numbers, “Down to the Waterline” and “Water of Love,” were paired as the band’s second single. Recordings took place the prior February/March with production by Muff Winwood (Sparks, Deaf School, Burlesque, Fabulous Poodles). As on future albums, all the tracks are credited to Mark Knopfler.

In North America, Dire Straits was issued on Mercury (Canada) and Warner Bros. in the U.S., where the band became a rare transatlantic breakout at a time when stateside audiences were mostly unreceptive to new British talent. 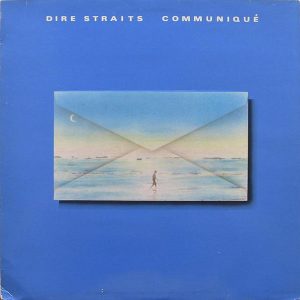 The band’s second album, Communiqué, hit shelves in June 1979. Like its predecessor, the album contains nine tracks, including “Single-Handed Sailor,” “Once Upon a Time in the West,” “Lady Writer,” and “Where Do You Think You’re Going?” Those last two songs were coupled as the album’s sole single. The album was recorded the prior fall at Compass Point Studios in Nassau, Bahamas, and produced by Barry Beckett and Jerry Wexler.

In October 1980, Dire Straits released their third album, Making Movies. Side one consists of three medium-length songs, all released as singles: “Tunnel of Love,” “Romeo and Juliet” and “Skateaway.” The last of those has a video clip that was heavily rotated on MTV. Side two features “Expresso Love” and three shorter numbers: “Hand in Hand,” “Solid Rock,” and “Les Boys.” The album was recorded at New York’s Power Station and co-produced by Knopfler and Jimmy Iovine.

Though present that summer during the Making Movies sessions, David Knopfler ultimately left the band over musical differences with Mark, who re-recorded the rhythm guitar tracks. Sessionists Roy Bittan (keyboards) and Sid McGinnis (guitar) are heard on select tracks.

Also in 1980, Knopfler guested on the debut solo album by Thin Lizzy frontman Phil Lynott, lending guitar and production services to the track “Ode to Liberty (The Protest Song).” Knopfler’s guitarwork is also heard on the Steely Dan track “Time Out of Mind” from their 1980 release Gaucho. 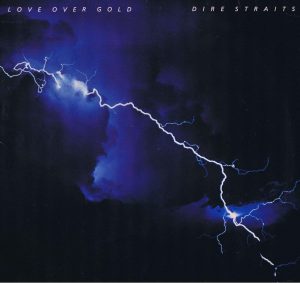 Dire Straits returned in September 1982 with Love Over Gold, recorded that spring at the Power Station and produced by Knopfler. The album features the 14-minute “Telegraph Road,” followed by four medium-length songs: “Private Investigations” (UK #2), “Industrial Disease,” “It Never Rains,” and the title-track. (Another track written at this time, “Private Dancer,” was withheld from the album but later given to Tina Turner, who made it the finale of her namesake 1984 comeback album.) The band expanded to a five-piece on this release with the addition of keyboardist Alan Clark and American guitarist Hal Lindes, formerly of new wave rockers Darling. Malletist Mike Mainieri guests on two tracks.

In 1983, Dire Straits released the three-song 12″ ExtendedancEPlay. The U.S. version includes a fourth track, “Badges, Posters, Stickers, T-Shirts,” originally issued in the U.K. as the b-side to “Private Investigations.” The comical retro-rocker “Twisting by the Pool” was a hit in several territories (UK#14, NZ #1). Also that year, Knopfler scored the soundtrack to the Scottish comedy-drama Local Hero, his first of many soundtrack works.

With four albums under its belt, the band released Alchemy – Dire Straits Live in March 1984. The set was captured the prior July 22/23 at London’s Hammersmith Odeon. The 10-track double-album clocks in at 88:53. It includes renditions of four tracks from Making Movies, two from Love Over Gold, and one apiece from the first two albums. The set features lengthy versions of “Tunnel of Love” (14:38), “Once Upon a Time in the West” (13:01), and “Sultans of Swing” (10:48). Performances of “Two Young Lovers” (ExtendedancEPlay) and “Going Home” (Local Hero) are also included. The album was simultaneously released as a double CD with an eleventh track, “Love over Gold,” bringing the total playing time to 93:59. The band are augmented on this release by keyboardist Tommy Mandel (Martin Briley, Klaus Nomi) and saxophonist Mel Collins (King Crimson, Camel, Kokomo).

Also in 1984, Kopfler scored soundtracks to the Irish drama Cal and the Scottish comedy Comfort and Joy. He also manned the console for Knife, the second album by Aztec Camera. Meanwhile, Illsley debuted as a solo artist with the Vertigo release Never Told a Soul, recorded with Williams and backing on select tracks by Knopfler and guitarist Phil Palmer (Bliss Band) and violinist Bobby Valentino (Fabulous Poodles). 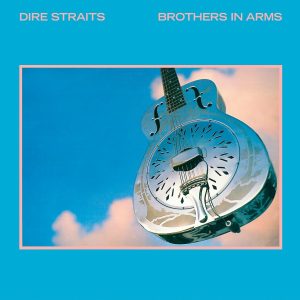 That October, Dire Straits entered AIR Studios, Montserrat, to lay tracks for their fifth studio album. The resulting Brothers in Arms, released in May 1985, topped the charts in more than a dozen territories worldwide. It features nine songs, including “The Man’s Too Strong,” “Your Latest Trick,” the lengthier “Ride Across the River,” and the title-track. The band became a six-piece on this release with the addition of keyboardist Guy Fletcher. Though retained in the lineup, Williams was benched for these sessions in favor of American jazz drummer Omar Hakim (Tom Browne, Weather Report, Roy Ayers, Kazumi Watanabe).

The album’s lead-off single, “Money for Nothing” (US #1), was inspired by a conversation Knopfler overheard between two warehouse workers who expressed regret over not taking up instruments and becoming rock stars. The workers are depicted with computer animation in the song’s popular video, which also features roboscopted footage of the band. Sting sings the falsetto opening line I want my MTV and is credited as co-writer, merely because his part appropriates the melody of his own composition “Don’t Stand So Close to Me.” The album also yielded two other hits: “Walk of Life” and “So Far Away.”

Blind Fury
Blind Fury were an English hard-rock/metal band from Newcastle-upon-Tyne that released the album O...
Terry Britten
Terry Britten (born July 1947) is an English-born musician, songwriter, and producer who first emerg...
Full Circle
Full Circle were an American jazz-rock band from Las Vegas that released an eponymous album in 197...
Phil Daniels & the Cross
Phil Daniels & the Cross were an English rock band that issued a self-titled album on RCA in 1...
Jean-Michel Jarre
Jean-Michel Jarre is a French keyboardist and sound technician who has been active since the start...